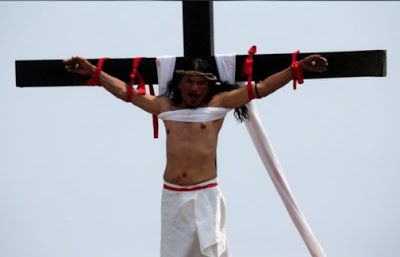 A Philippine man, Ruben Enaje, who has been nailed to a cross every Easter for the past 32 years in a Good Friday re-enactment of Jesus Christ’s crucifixion says he no longer feels any pain from his wounds.

Enaje, 58, again portrayed Christ on Friday in the traditional religious rite in Cutud village, about 76 km (47 miles) from the capital Manila.

“In the past, I went home injured and limping, but this year I feel so great,” Enaje said after the ritual held under a sweltering sun.

He said he believed his strong Catholic faith helped him avoid pain. “I feel like he is telling me ‘go ahead, keep it up’,” he said, referring to God. Such a beautiful thing!

This man gets nailed on the cross for real every year since 32 years was last modified: March 31st, 2018 by Reporter