Man of God allegedly sleeps with another man’s wife, moves to sleep with daughter [WATCH] 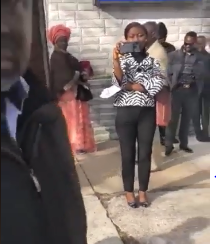 A UK based Nigerian has allegedly accused a man of God of sleeping with his wife and later making advances on his daughter.

In a video that has gone viral online, the man covered the acclaimed Pastor whose members stood in front of the church to restrict the man entered into the church.

The man also claimed he has the evidence of the chat he made with his daughter.

Man of God allegedly sleeps with another man’s wife, moves to sleep with daughter [WATCH] was last modified: February 10th, 2020 by Reporter

Rev. ESTHER AJAYI Reveals Her Love Story – How She 1st Met Her Husband In 1974