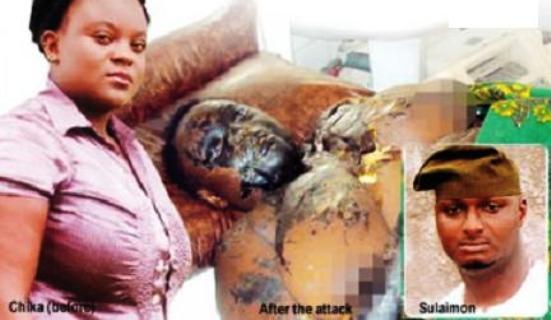 A Lagos High Court in Ikeja has sentenced a man, Sulaiman Olalekan to death by hanging for the murder of his wife, Chika Egbo on November 20th 2012. Sulaiman had met the deceased at Signal hotel Ijeshatedo where she was reportedly serving as a prostitute.

He fell in love and decided to marry her only if she promised never to go back to prostitution again. She made the promise and then they got married. Sulaiman bought her a fairly used car and even paid her tuition while she was at the Enugu College of Education.

He later discovered that his wife had reneged on her promise and had gone back to prostitution.

In anger, he bought acid from a battery charge at Ikotun in Lagos and invited over to his mother’s house where he poured it on her.

He was arrested and the case was taken up by the the Lagos State Government through the state Ministry of Justice. The victim was rushed to the Lagos University Teaching Hospital (LUTH) for emergency medical treatment where she eventually died.

Delivering judgement in the case yesterday, the trial judge, Justice Lawal Akapo, convicted Sulaiman for the murder of his wife and sentenced him to death accordingly.

According to Justice Akapo, the murder of Chika Egbo by Sulaiman was premeditated. The state Attorney General and Commissioner for Justice, Adeniji Kazeem, who was the lead prosecuting counsel, thanked the Court for a well-considered punishment which would help push the state’s campaign against domestic violence.

Man sentenced to death by hanging for killing his wife in Lagos was last modified: February 24th, 2017 by Reporter