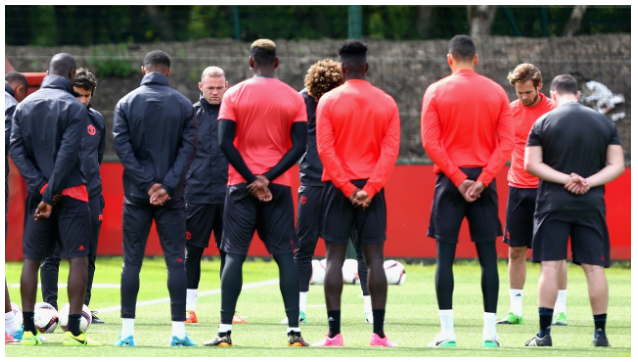 Manchester United and Ajax will observe a minute silence before Wednesday’s Europa League final in Stockholm kicks off.
This is to commemorate the victims of the Manchester terror attack, UEFA has confirmed.
On Monday, a suicide bomber killed 22 people and injured another 59 at Manchester Arena following a concert by American pop star Ariana Grande.
As a mark of respect, European football’s governing body confirmed a silence would be observed prior to kick-off at the Friends Arena, with the players wearing black armbands and its initial plans for a pre-match show scaled

“Following last night’s attack in Manchester, UEFA has confirmed that a minute’s silence will be observed prior to the UEFA Europa League final in Stockholm on Wednesday night,” a statement from UEFA read.
“The opening ceremony will also be considerably reduced as a mark of respect for the victims of the Manchester attack.”
UEFA accepted a request from United not to take part in Tuesday’s pre-match news conference in light of the tragedy, although manager Jose Mourinho issued a short statement in which he said players and staff “cannot take out of our minds and our hearts the victims and their families”, while backing the people of Manchester to “pull together as one”.
Mourinho’s opposite number Peter Bosz did address the assembled media in the Swedish capital and told reporters a sombre mood around the showpiece match was unavoidable.
“What happened in Manchester is something we all feel at Ajax and on behalf of all players at Ajax I express sympathies with everyone that fell yesterday,” Bosz said.
“The feeling that prevails for me is that that final doesn’t have this glow it should have.

SEE ALSO: READ JOSE MOURINHO’S REACTION AFTER MANCHESTER ARENA TRAGEDY
“Tomorrow should be a football feast but the events have affected it, especially as we are playing Manchester United. I offer my heartfelt sympathies.”
Bosz explained his squad had discussed the tragic events, with a number of their loved ones having attended Grande’s recent show in Amsterdam.
“Of course we talked about this,” he said. “Her name is Ariana Grande, I think about 10 days ago she was in Amsterdam and wives of players went with children, so it is something that really touches us.
“If it can happen in Manchester it can happen anywhere.

If you give this snack to your kids, stop now!