Home News ‘Many Parts Of K1 Most People Don’t Know’, His friend of over 40 years, Bolaji Basia Reveals
News

‘Many Parts Of K1 Most People Don’t Know’, His friend of over 40 years, Bolaji Basia Reveals 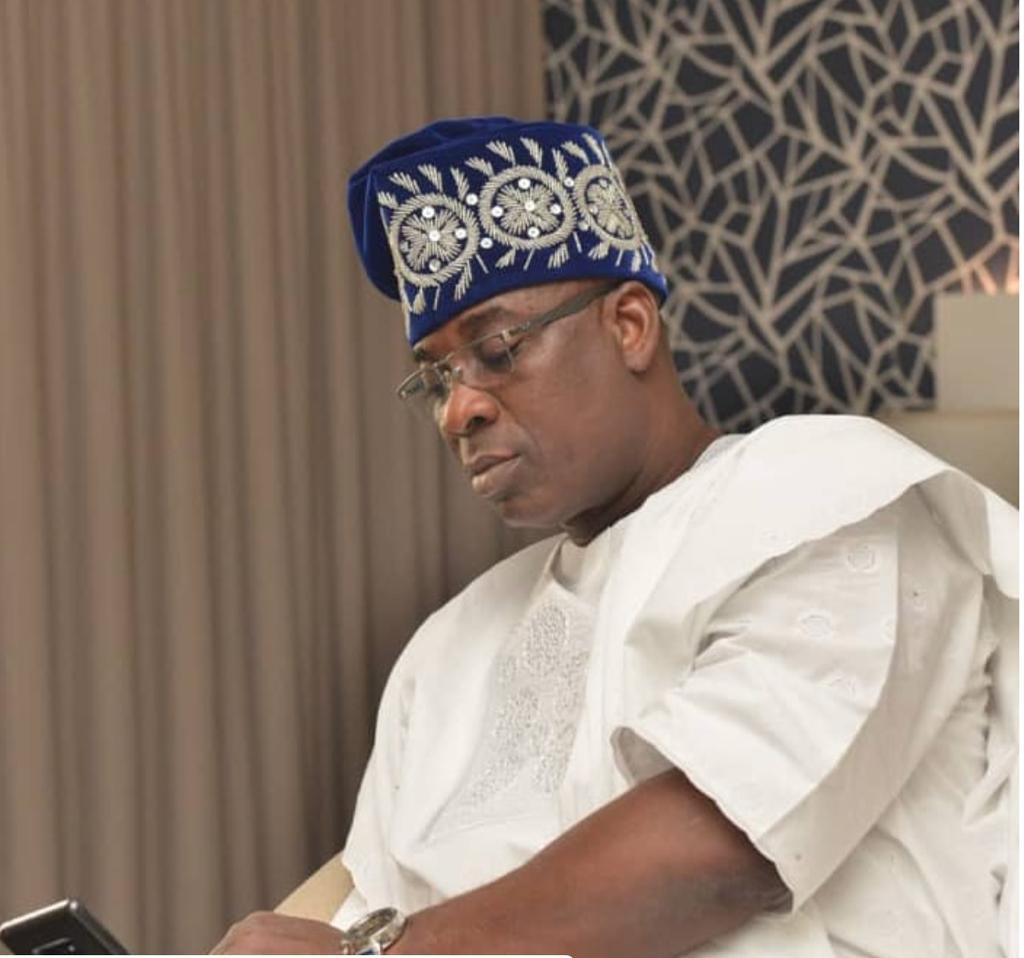 One good trait many say, Fuji-star, K1, the  Maiyegun of Yorubaland has is that he does not forget his old friends. He proved that to City People when we recently visited him. During preliminary discussions, before the commencement of the interview, we asked him who is best friends are and his answer was quick in coming. He said though he has many friends, the 3 closest friends to him are Bolaji Basira, Akin Fijabi and Bisala. He said they have all come a long way. We then went after them to get each to talk about the K1 they know.

Recently, he revealed the depth of their friendship when he wrote about what K1 did to honour him when he, Basia turned 60.

You want to quickly come to his defence but unfortunately he’s not a regular guy.

So, if you are not careful with what you say, you might ended up putting him in more trouble

Money is very important in life but, the day you put money above your friendship, its only a matter of time before that friendship go south…

After his installation as Mayegun last year January I moved back to Canada. Couple of days later he called me to ask how are we going to celebrate my 60th birthday.

I told him omo, not interested in making any noise jareI just want to celebrate it with my family and some friends here in Canada then come to 9ja and hang out with him…

Of course as expected he disagreed with the idea and said omo, it’s your 60th birthday, you can’t just let it go like…

Since I know you can’t win an argument with him, I just let it be…

Later Bayo his manager called me to confirm my birthday date.

I asked him why, he said Alhaji asked him to go and pay for a hall at Radisson hotel for my birthday.

As God will have it, there was lockdown everywhere…

I asked him to get me an agent to help me get a land which he obliged. I arrived and found one not too far from his house

Since that was why I came to 9ja, I wasted no time in showing interest.

He told me the property had been paid for.

I asked him why and who?

He told me OMO, THAT WAS YOUR 60TH BIRTHDAY GIFT FROM ME…

When I told him omo, thanks

I can now move to site and finish my project

His response was omo, you deserve more than that and I’m not done yet…

Sometime in 2020 Bolaji Basia also spoke to City People Publisher SEYE KEHINDE for over 2 hours and he revealed a lot about K1 and their relationship. He was looking very fresh. He was in white Buba & Sokoto and nothing seems to have changed about this socialite who rocked the 80s & 90s with K1. In those good old days, Bolaji Basia was one of the big names in the entertainment circuit. He was a big music promoter, promoting the likes of K1 and others like Ayuba.

Though he is still very close to K1 he has since moved into other businesses. He has become a big investor in the Entertainment industry.

Below are excerpts of his interview.

Recently K1 mentioned you as his best friend, that you are an old friend. He holds you dearly and you constantly post stories about him. Tell us how your friendship with K1 started and how have you been able to sustain your relationship with him over time.

The relationship started about almost 4 decades back. As with every relationship we had our ups and downs. We respect each other. We understand each other. He is an understanding person. We do fight. At times, we would fight, we would go. Nobody has ever come to say Bolaji & Wasiu sit down, let’s settle this rift. It has never happened. We may have our misunderstanding and go our separate ways, but anytime I meet him anywhere or I feel I have missed my friend, it’s been a while, let me go to his house. Once I see him, he is not going to talk about it. The same thing with him. If we have been fighting and we have not been talking, whenever he sees me, it is just going to be as if nothing has ever happened.

Can you recollect the very first day you met him?

I cannot recollect the 1st day we met precisely. We both grew up on the Island. If you grow up on the Island its going to be very difficult if you are a member of our generation not to notice his presence. We had so many Fuji musicians at that time, a lot of them that were his contemporaries. But his own kind of music stood out.

Growing up on the Island, Isale Eko to be precise, the artiste I grew up to know, through our brothers, was Barrister. I love his music and I was following it up till when he died. He knew my favourite artiste was Barrister. That was when we were growing up. Me, I am not generally into fuji. I am not a Fuji person perse. I am not really, really a Fuji person. Growing up, I love going to clubs, partying, disco parties, going to different kinds of clubs. There is no club in Lagos then that I don’t patronise. I love music. I don’t like a particular kind of music, its any kind of music. Music has no language. Even the ones that I don’t understand the lyrics, once the rhythm is ok, it is ok by me. That is the way I see music.

Wasiu too was playing. Once in a while, I will go with one of our friends to his party. I knew him. He was playing good music. There is no way you will live in the Island and will not have anything to do with him. He dominated the scene then, right from when he took off. And I am talking about the early 80s. When we were all very young. He dominated the scene, but they were many singing Fuji. His kind of music stood out.

That was when the romance started. I had so many friends who were members of social clubs. They all had social clubs and they would from time to time do their annual club ceremony. I will be invited. Then, I will go. But I don’t do social club activities. Up till today, I am not into social clubs. I just don’t see any reason I should be into it. It’s not my kind of thing.

Many don’t know this about me, surprisingly I am an Introvert. I don’t go out. I hardly go out. I like going to where I would not be recognised. I enjoy myself more when I go to clubs, lounge where I can sit down, have fun, enjoy myself. I enjoy that much rather than going to our parties. That was what I was doing back then.

So, when my friends invite me to such parties I will go there. We all know him. We would greet each other, Omo, Bawo Ni. We all grew up together in different parts of that Isale Eko area. The whole area is very small. Yes, it’s on the Island but me all know who is who, who is where. There is usually an event that will bring everybody together most especially parties or Eyo Festival or Fanti, those cultural things that bring us together. So, we knew each other. We may not have been very close because of the differences in the area we were in.

He is from Agarawu, and I am from Isale Eko. Agarawu to Isale Eko is not too far. Sometimes its 10 minutes walk or 15 minutes walk. We are all interwoven. So, I knew K1 from childhood but we were not that close then until we started growing up. That is when the relationship developed. He was with a lot of friends who were very, very close to him. Friendship is not how long, in most cases, its how well you people are able to connect. One of the things that make our relationship grow stronger was because as we began to get closer, being my friend, I had to do everything possible to make sure his music improves.

At that time there were a lot of musicians. There was a time Sony Music just came. Mrs. Keji Olounwo was behind it. She was a promoter. She had a couple of artistes signed to that label. K1 was invited to join. He negotiated with them but the deal didn’t work out. He is the kind of person that loves his independence. The thing about him is that everything is not usually about money. It’s about his Independence. When they invited him, the deal wasn’t quite ok, he opted out. They signed Shina Peters, Ayuba, and other artistes, so Wasiu was left on his own, with Babalaje then.

So, we were like Omo, what can we do to grow your music career? You cannot be left out. These people are bringing in money, we don’t have money, but we have the street, (fortunately for us). We are not going to allow this person to take the street from us. That was how we came together to float a promotional outfit. That was what led to the setting up of Abosa Promotions, locally. We never planned on moving it abroad. It was from Abosa Promotions that we started putting up shows too. We used to organise shows at the clubs. We were moving round all the shops. To make the shows to be jampacked I now introduced GoGo into it. We took the risk then because Nigeria was not ready for something like that. We did the 1st one, people were not aware of what we were doing. They kept asking what is GoGo. After the 1st one, we put the video out on the street. People saw the video, that some girls can actually take off their clothes and be dancing naked in front of people? When we did the 2nd one, it was jampacked. That was how we took off.

To answer, your question directly. Between K1 and I, it was a friendship that turned into doing everything I could to assist the brand called K1. That is what has kept together for so long. It is not only about himself alone, but about his music and career. That was how we started everything.

How old were you guys when you started your friendship at that time?

‘Many Parts Of K1 Most People Don’t Know’, His friend of over 40 years, Bolaji Basia Reveals was last modified: March 2nd, 2021 by Reporter

WHY I LEFT ACTING FOR A WHILE- ACE NOLLYWOOD ACTRESS, OYITA

Why I wear white apparel and flowers – Satguru Maharaji