MAPOLY Students Go Wild During Protest Against Non-release of Result 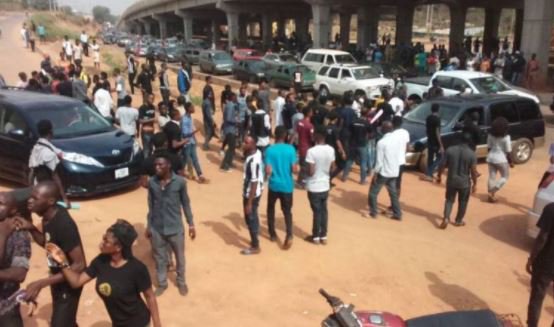 Students of the Moshood Abiola Polytechnic (MAPOLY), Abeokuta, on Monday went wild to protest the non-release of their examination results by locking the school’s main gate.

The students lamented that results of the exams concluded in January had not yet been released, hindering them from being mobilised for the National Youth Service Corps (NYSC) in April.

PUNCH reported that both academic and non-academic staff have been denied access to the compound.

YOU MAY ALSO LIKE: BUHARI RECOUNTS: NIGERIA’S “VERY TURBULENT” JOURNEY IN THE PAST THREE YEARS

In December, twenty students of the institution were arrested by operatives of the special anti-robbery squad (SARS) while protesting the delay of their second-semester examination.

The delay was as a result of the industrial action embarked upon by the Academic Staff Union Polytechnics (ASUP) of MAPOLY over the relocation of the institution to Ipokia, Ogun state.

The industrial action which crippled academic activities in the institution for three months was suspended in January.

READ ALSO: HOW I WAS INSTALLED AN OBA IN A CHURCH – HRH OBA DOKUN THOMPSON, THE OLONI OF ETI-ONI