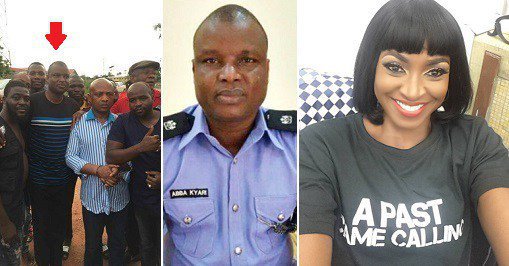 Nigeria’s crime buster, & Detective, ACP Abba Kyari, who led the arrest of Notorious Kidnapper, Evans who he describes as one of the smartest criminal he’s every dealt with, has opened up on the arrest, and also reacted to Kate Henshaw’s criticisms.

Recall, the actress blasted the Nigerian Police for taking pictures with Evans, an act she tagged as inappropriate. Here are excerpts from the chat;
How long have you been looking for Evans?
I have been on his trail since the past five years. He really gave us a tough time.
Why tough times, was he more sophisticated that your team?
Not really, I think he is the smartest criminal I have ever seen in my entire life. Among all the high-profile robbers and kidnappers we have nabbed, Evans stands to be the smartest. He really gave me headache because we couldn’t track him.
How true is the report that his sister showed you his hideout?
That is not true. He kidnapped someone and refused to release the person after collecting ransom of N300m. When the victim’s family called, he asked them to bring another N300m. Unfortunately for him, the victim escaped and alerted the police. However, on getting there, they had fled but left some details behind. That was how we traced him.
What was his reaction when he saw you?
That guy is very smart. On sighting us he was shocked to his marrow, he wanted to run but when he sighted my pistol he surrendered. He never thought he could ever be arrested. He was speechless for hours because he made sure he equipped himself with all the gadgets that would not enable us track him.
Would you say his arrest is your greatest feat as an intelligent Police officer?
Well, I think my biggest catch was a notorious kidnapper, called Abiodun Egunjobi, otherwise known as Godogodo. The man had killed over 200 Nigerians. Upon his arrest, he admitted killing over 50 policemen and took away their riffles. But he is not as smart as Evans.
Some people believe you use spiritual power to track criminals, how true is this?
I don’t have any spiritual power aside the almighty Allah. There is no other secret aside God, hardwork and dedication. If you have been to developed countries, then you would know Nigeria still has a long way to God. In this job, I try to be focused and dedicated. This is the secret to a successful life. I don’t use any juju in the course of my duty.
Are you not afraid of being attacked by these people?
Well, when I ventured into this job, I know what it entails, so there is nothing to be scared one, though one has to be very careful. Of course, you don’t except me to party around like other people would do. I try as much as possible to be careful.
Kate Henshaw and other Nigerians have been trashing you for celebrating and snapping pictures with Evans, what’s your reaction?
Who is Kate Henshaw and what does she know? She must be out of her mind to criticize us. Even in other developed countries, people celebrate the capture of criminals and I wonder why she is running her mouth criticizing us why she has never caught a fly in her entire life.
Mastermind of Evans arrest, Abba Kyari blasts actress Kate Henshaw for criticizing the Nigerian police was last modified: June 25th, 2017 by Arinze Ago

How Pastor ADEBOYE Stepped Up His Style...