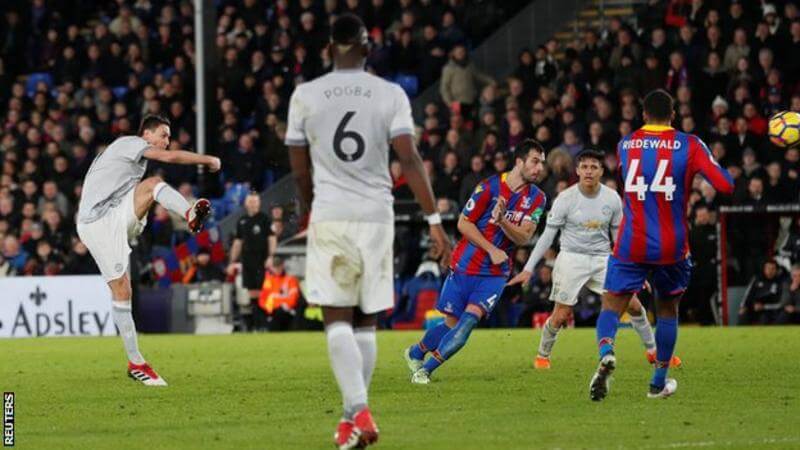 Nemanja Matic scored a stunning stoppage-time winner as Manchester United came from 2-0 down to go second in the Premier League table and leave Crystal Palace in the relegation zone.

“I always believe we can win. I will be like that until my last day,” said United boss Jose Mourinho.

“You always need that little bit of luck to win a match in the last few minutes. Sometimes the winner is the one who deserves the congratulations but I think

Hodgson’s side would have climbed all the way up to 13th place with a win.

But, after Chris Smalling’s header started a comeback from an improving United, Romelu Lukaku swept in his 99th Premier League goal to pile the pressure on the tiring hosts.

And, with 91 minutes on the clock, Matic smashed in a dipping shot from 25 yards to consign Palace to another week in the drop zone and move United above Liverpool.

The two giants meet at Old Trafford on Saturday lunchtime and Mourinho will know that, despite this win, his team must play far better than they did for most of an underwhelming display at Selhurst Park if they are to beat Jurgen Klopp’s men.

Palace, who will feel deflated to remain 18th after leading through goals from Andros Townsend and Patrick van Aanholt, must take heart for the dogfight ahead from their committed and organised display with 10 first-team players out.

But, when seconds away from a point, Matic smashed home to inflict a second costly late home defeat in the space of eight days.
Last weekend it was Harry Kane and Tottenham who left Palace sickened with a late winner, and a run of six games without a win has hurt their chances of Premier League survival.

“It’s been a Groundhog Day moment,” said Hodgson. “We once again go away with no points and like the game against Tottenham – I thought we deserved something.

“I was expecting to come away with one point but once again it is nothing and I feel devastated for the players.

“We took the game to Manchester United. If we had drawn the game, I don’t think anyone – Jose included – would have said it was a scandal.”