Mayweather-McGregor promo tour gets off to frenzied start 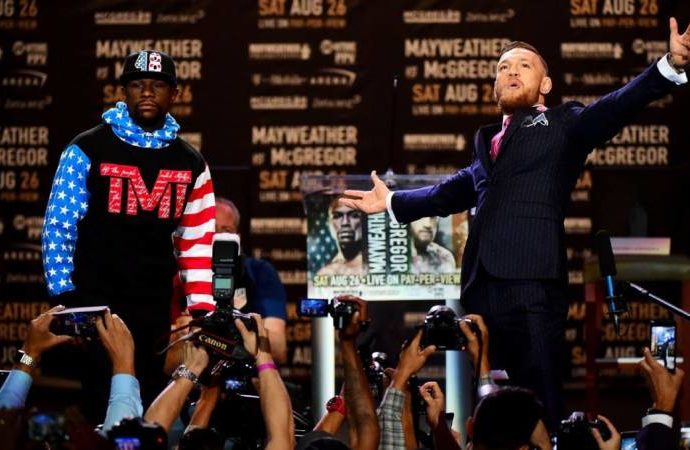 Floyd Mayweather Jr. reached into a backpack and held out a $100 million check for the crowd of 11,000 fight fans to see.

Conor McGregor interrupted from his stool behind the podium: “That’s to the tax man.”

The undefeated boxer and the Irish UFC champion have thrown their first jabs in a summer of verbal sparring before the fighting spectacle of the year.

Mayweather and McGregor kicked off a four-city promotional tour Tuesday at Staples Centre, facing off in front of a raucous crowd that thoroughly enjoyed this circus’ first stop in Hollywood. Both fighters promised a knockout, and they had a prolonged shouting match during their second faceoff, with UFC President Dana White stepping between them.

“I am fighting, and he is boxing,” McGregor said. “It’s two men at the top of their game competing. It’s two worlds colliding. That enough is reason why this is what it is.”

All but the most naive fight fans realize the promotion for this bout could be much more entertaining than the historic 154-pound fight Aug. 26 in Las Vegas.

McGregor and Mayweather traded clever insults and profane boasts that quickly showed why this boxing match should be a rare spectacle — before the opening bell, anyway.

“He looks good for a seven- or eight-figure fighter, but I’m a nine-figure fighter,” Mayweather said. “This (guy) made 3 million dollars his last fight, but we know that’s training camp money for me.”

The 40-year-old Mayweather has been coaxed out of his latest retirement for the colossal payday coming from this unique matchup. The bout will cost $99.95 on high-definition pay-per-view, while tickets at T-Mobile Arena will range from $500 to $10,000 — and there aren’t many $500 seats.

In a tailor-made pinstripe suit that repeated a profane phrase in tiny letters as its stripe, McGregor didn’t try to disguise his glee at the prospect of his mammoth financial reward for seeing how his heavy hands can fare against Mayweather’s famed defensive skills in this cross-disciplinary experiment, reports The Associated Press.

McGregor got more personal than Mayweather, going after everything from the boxer’s apparent money troubles to his attire. McGregor also risked racial offensiveness when he yelled, “Dance for me, boy! Dance for me, son!” during an exchange with Mayweather.

“He’s in a … track suit,” McGregor said, looking at Mayweather. “He can’t even afford a suit anymore. The Rolls is a 2012 outside. He is (expletive). There’s no other way about it. I’m going to knock him out inside of four rounds, mark my words.”

Two years after his last fight and several years after his trash-talking heyday, Mayweather rose to the promotional challenge in an energetic, biting performance. The unbeaten star led his fans in a call-and-response cheer that derided McGregor as “easy work!”

“That’s what the people want to see,” Mayweather said. “To have a sold-out arena and just give these people something just real smooth and calm, they don’t want that. That’s not what they want. These fans want entertainment, and that’s what we’re here to give them.”

And while the 40-year-old Mayweather acknowledged his skills have declined and claimed his comeback is for one fight only, he also said he has “more than enough” to beat a rookie boxer.

When McGregor spoke to the media after the public show, Floyd Mayweather Sr. relentlessly heckled him from the back of the room. The 64-year-old trainer’s presence provoked genuine amusement from the two-division mixed martial arts champion, who suggested he might not abide by the contract that would punish him for MMA tactics with an enormous financial penalty. “Tell him as long as he speaks my name with respect, I will abide by the boxing rules,” McGregor said to Mayweather Sr. “I’ll abide by the Marquess of Queensberry Rules only if he speaks my name. If he disrespects me during this buildup, then maybe I might just bounce an elbow off his eyebrow. So that’s on him how he does it.”

Mayweather-McGregor promo tour gets off to frenzied start was last modified: July 12th, 2017 by Arinze Ago