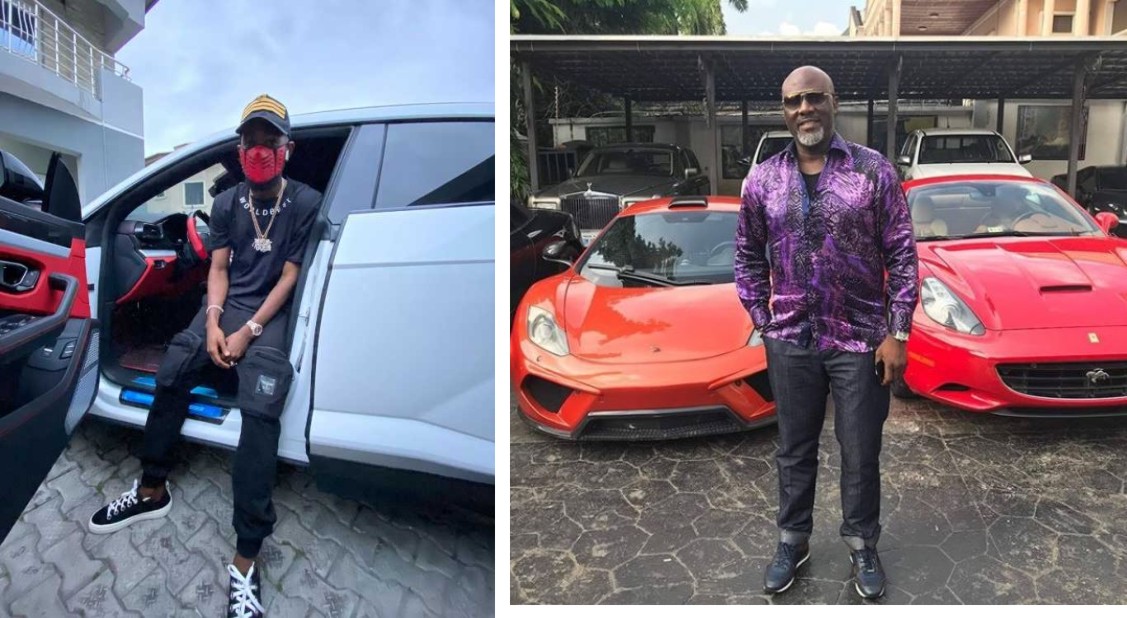 Automobili Lamborghini S.p.A. is an Italian brand and manufacturer of luxury sports cars and SUVs based in Sant’Agata Bolognese. The company is owned by the Volkswagen Group through its subsidiary Audi. Founded 59 years ago by Ferruccio Lamborghini, the company is famous for designing out-of-this-world vehicles that can blow one’s expectations and are instantly recognizable on the road. Designers of Lamborghini cars have created a design that makes the driver feel he’s time-travelled into the future. Indeed, this car is a powerhouse. But, it doesn’t come cheap. It’s sold for millions in naira but some Nigerian celebrities have it. In this report, City People’s Contributing Editor, IYABO OYAWALE lists top Nigerian celebs who own Lamborghini Cars. Enjoy it!

Music sensation, Olamide Adedeji, popularly known as Olamide, knows how to make his fans happy by dishing out good music. He also knows how to reward himself after working hard by investing in luxurious automobiles. Recently, the YBNL records boss bought a brand new Lamborghini Aventador worth N218 million. He didn’t make noise about the acquisition but the rumour mill is agog with the news. Popularly known as Baddo, Olamide belongs to a clique of young musicians that are taking Nigerian music to the next level and are getting rewarded for doing so.

Davido recently took delivery of his N300m Lamborghini Aventador. The 29-year-old bought the Lamborghini Aventador Sports Car to celebrate a successful 2021. He lamented on the amount he paid to clear the car at the port. He shared pictures of the car on social media with fans. After his sold-out London concert early this year, the singer also acquired a Maybach.

Nigerian pop star, Wizkid has reportedly acquired a new Lamborghini Urus which is said to be worth almost N101m. The pop star was seen in a video on his Instagram page sampling the car. The Lamborghini Urus features an All-Wheel Drive (AWD), 4.0-Liter V-8 engine, 4-5 Seating /4 doors as well as an SUV.

Joseph Eze Okafor, popularly known as Jowi Zazaa, is a young Nigerian billionaire in his early thirties. To celebrate his 34th birthday, the oil and gas mogul gifted himself a Lamborghini Aventador. This luxury ride is worth N115m and this sparked so many questions online.

Superstar soccer player, Obafemi Martins owns a 2013 Lamborghini Gallardo that is estimated to cost N120m. The car features an All-Wheel Drive (AWD) or Rear-Wheel Drive (FWD), 5.2-Liter V-10 engine, 2 Seats / 2 doors, and coupe and convertible body style. The Lamborghini is one of the luxurious cars in his garage. Known to be a car lover, Obafemi recently acquired a Bentley Bentayga Mansory.  Aside from the Lamborghini Gallardo, Obafemi also showed off his Lamborghini Aventador on his Instagram page recently. This is said to cost about N162m.

Ismail Mustapha, popularly known as Mompha, lives large, dresses well, and has luxurious cars in his garage. One of such is his collection of Lamborghinis, ranging from his Lamborghini Aventador which is believed to cost N151 million to the Lamborghini Huracan whose suggested retail price tag is about N73.6 million, excluding delivery fees or tax. The Chief Executive Officer (CEO) of Mompha Bureau De Change shuttles between Dubai and Nigeria.

Aside from the Lamborghini Gallardo, Senator Melaye recently launched his Lamborghini Aventador Roadstar convertible 2020. It’s the 50th Anniversary model. His own car is 4 of 100 ever made and it’s $1 Million before clearing. That’s over N600m.

Grammy award-winning singer, Burna Boy recently replaced his crashed Ferrari with a brand new 2022 Lamborghini Urus (Novitec Edition). Burna Boy recently survived an accident with his expensive Ferrari 458 2013. The 30-year-old was involved in an accident in the Lekki area of Lagos on Saturday, February 27, 2022.

The 2022 Lamborghini Urus is the first and only SUV produced by the Italian luxury automaker, Lamborghini. The production of the Lamborghini Urus started in 2018 ahead of the 2019 model year. The SUV can accelerate from 0 to 100 km/h in just 3.6 seconds.

The engine bay is filled with a 4.0-litre, twin-turbo V8 engine that produces 641 hp and 627 Lb-ft of torque. The estimated landing price of the Lamborghini Urus is N332m excluding shipping and customs fees.

Burna Boy’s Lamborghini Super SUV Urus is the first Super Sport Utility Vehicle in the world to combine the soul of a super sports car with the functionality of an SUV.

Singer, Patoranking has acquired a brand new Lamborghini Urus SUV. He gifted himself the luxury SUV and shared pictures on social media. Patrick Nnaemeka Okorie, better known by his stage name Patoranking, took to his Instagram page to show off his brand new Lamborghini Urus. The Nigerian reggae-dancehall singer and songwriter shared a video and picture of his new acquisition, worth N140 million, on Instagram. The Lamborghini Urus joins his other cars, including a Mercedes-Benz G-Wagon and a Porsche Boxster.

Peter Okoye, one-half of the singing sensation, P-Square owns a white Lamborghini Aventador. He flaunted this car on his social media pages. The Lamborghini, with signature scissors doors, is one of several supercars in his garage. He also boasts of a Mercedes-Benz G-Wagon SUV, a Jeep Wrangler and a Chevrolet Camero Roadster.

The base price of the 2-door mid-engine roadster is about N142 million. This price excludes the cost of shipping and clearing it in Nigeria.

Yemi Alade owns a Lamborghini Huracan which is estimated to cost N104 million. She mostly uses this car for her expensive videos. Aside from this, she also owns a Toyota Tundra Truck, Mercedez Benz G-Wagon, Range Rover Sport, Rolls Royce Phantom, and a Lexus GX 460.

Music sensation, Phyno owns a Lamborghini Gallardo Spyder 2011 that is worth a N117.9million. The car is an All-Wheel Drive (AWD), has a 5.2-Liter V-10 engine, and 2 Seats /2 doors. It also has a coupe and convertible body style. Chibuzo Nelson Azubuike, popularly called Phyno, is known for his hit singles, “Father” and “I Pray”, featuring Teniola. Born on 9th October 1986, Phyno is mostly known to infuse his native Igbo language into his music and this makes him unique.

Douglas Jack Agu, who is popularly known by his stage name Runtown, is a singer, songwriter, and producer. He acquired a brand new 2017 Lamborghini Gallardo valued at N150 million. The new whip is a unique and extravagant car that goes from 0 to 60 mph in just 3 seconds with a V10 engine, ceramic brakes, adaptive damping system and excellent transmission system.

Interestingly, Runtown’s hit song “Gallardo” shares the same name with his car, while part of the lyrics of his song “Emergency” with WizzyPro had the words “woke up in a Lamborghini.” His profession has come true in his latest car acquisition.

A billionaire, philanthropist, and politician, Prince Ned Munir Nwoko is an astute businessman. He is the husband of Nollywood actress, Regina Daniels. He has a large family and lives large. A major part of his living large is his collection of exquisite cars. This collection includes the luxurious 2015 Lamborghini Huracan which is worth an estimated N85million. The Lamborghini Huracan features an All-Wheel Drive (AWD), 5.2-Liter V-10 engine, 2 Seats /2 doors, as well as a coupe body style.

Okwudili Umenyiora is the CEO of Dilly Motors. He was born in the UK to Nigerian parents but grew up in the United States of America. He relocated back to Nigeria after a while. Besides dealing in automobiles, he has others businesses in real estate and entertainment, among others. This father of two loves high-performing cars and has an intimidating collection of cars in his garage, ranging from Rolls Royce to Lamborghini. Basically, he rides around town in the latest cars.

Florence Ifeoluwa Otedola, popularly known as DJ Cuppy, is the proud owner of a 2017 Lamborghini Huracan Performante which is worth an estimated N100million. This is aside from the Ferrari that his Billionaire oil magnate father, Femi Otedola, gifted her and her sisters, Temi and Tolani.