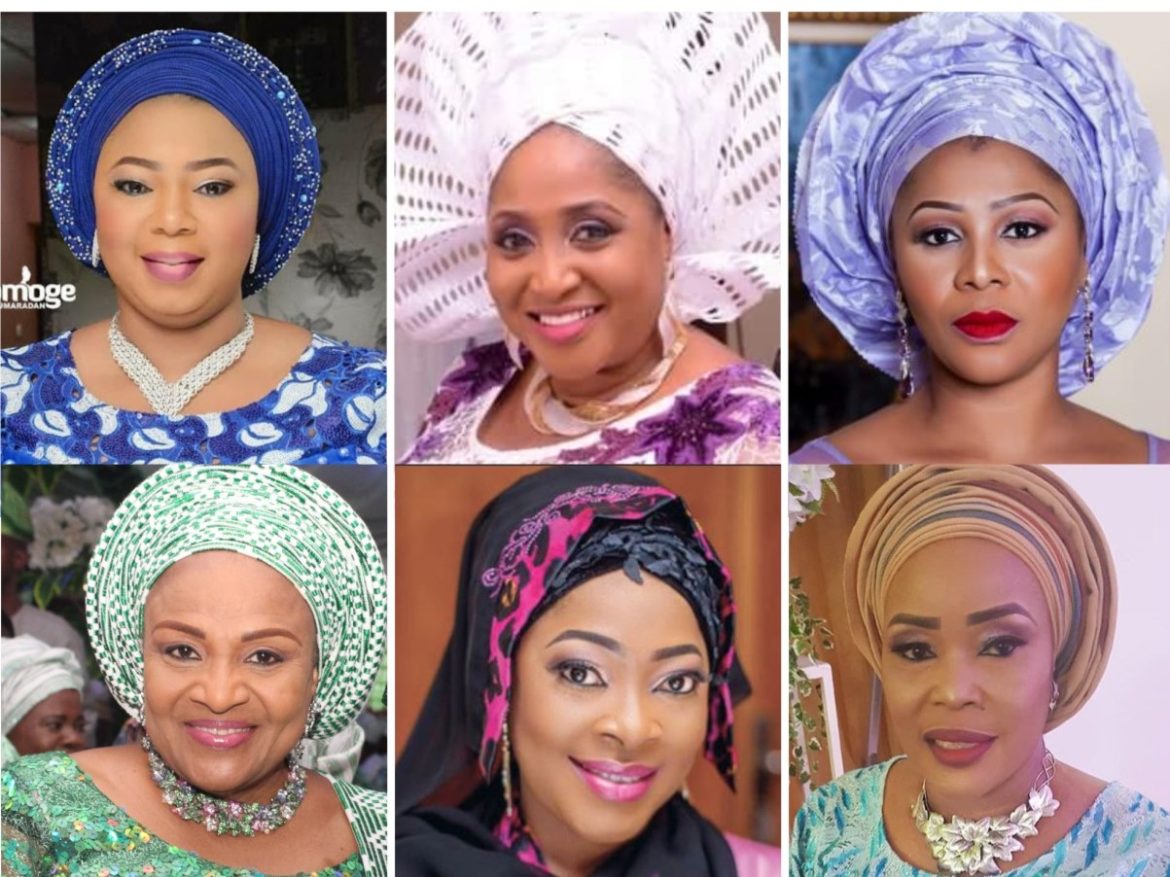 Ibadan is another social hub like Lagos and almost every weekend, there is always one party or the other taking place there. The parties are always filled with celebrity women who add so much colour and glamour to each of them. As these women are the life and soul of parties in Ibadan, they are also calling the shots at Lagos parties. There is virtually no society party in Lagos that you will not see many of them. They have so many friends across the states and move en masse to celebrate with their friends.

These outstanding women who have proved over the years that being well read, exposed, posh, intelligent or beautiful has nothing to do with being sociable are loved by many of their associates. They have proved that one can actually be sociable irrespective of her age, class or level. To some of these women, it comes naturally for them to mingle and socialise while some, in some cases, are forced by circumstances around them and some others are always in the company of their husbands. However, this set of women are those who rock parties in Lagos. Some have been around for more than 3 decades and they are still as relevant as ever and well respected in the society. These are not just ordinary women, they are women with class, brain and beauty. Women who have a track record of success in their respective endeavours. Listed below by Citypeople Society Editor, TAYO FAJORIN OYEDIJI (08111811219) are beautiful Ibadan celebrity women who rock Lagos parties.

Chief (Mrs.) Florence AbiolaAjimobi, the beautiful wife of Oyo State Governor, Senator AbiolaAjimobi has so much glamour to the office of the First Lady. She is one woman who has not allowed paparazzi of office get into her head. Though she attends most social functions alongside her husband but any party she goes whether with or without her husband, she commands a lot of respect. Her entourage alone will change the tone of any party.

She is the AsajuIyalode of Ibadan land and wife of the former governor of Oyo State Senator RashidiLadoja, Chief (Mrs.) YinkaLadoja. She has a unique way of tying her headgear which has become her trademark. She is dark and beautiful and of a good height. She always wears this kind of smile that makes it difficult to even know when she is angry. She is a successful businesswoman and a well-known politician. YinkaLadoja carries herself with so much respect. At any social function, people give her due honour and respect. She is one of those who have been dominating the social scene for a long time now.

She is the wife of a prominent Ijebu-born textile merchant, Chief Olanrewaju Kassim popularly known as ‘Shokas’. At over 70, Alhaja can still be well addressed as a fashion freak, she wears the best of the best. She is a top player in the textile business like her husband and also deals in jewellery too. She is one of those who have been consistently rocking the social scene for many decades. She understands party trend and dresses accordingly, very few women can beat her to that. She is the Yeyeoba of Ilishan Remo in Ogun State.

Beauty personified, that is how the wife of the former governor of Oyo State Otunba Adebayo Alao-Akala, Chief (Mrs.) Kemi could best be described. Apart from her beauty, she is also blessed with good stature, tall and straight. Her entry into any party is always grand, coupled with the fact that she doesn’t attend social function alone as a leader, it must be with a powerful entourage. Her time as First Lady was felt by all and sundry and even up till now, nothing has changed about her personality as a mentor and a cheerful giver.

She is from the prominent Adeleke family of Ede. She is the  immediate younger sister of the business mogul, Deji Adeleke. The Yeyeoba of Edeland is also a successful woman and contractor. She manages the restaurant aspect of her brother’s University, Adeleke University in Ede. She is married to an Ibadan man, Alhaji Sanni. The Adelekes generally are sociable and cheerful as well as highly business-oriented. Right from their late brother and the first executive governor of Osun State, Senator IsiakaAdetunjiAdeleke, to the popular music star Davido’s father, DejiAdeleke, Dupe and their kid brother, DemolaAdeleke who is presently the senator representing Osun-West Senatorial District, they are all successful.

She is the beautiful wife of the Eruwa-born late billionaire, Chief Adeseun Ogundoyin. The Queen of Sheba as she is popularly called in the social circle due to her striking beauty is a party rocker any day. She works hard and enjoys her life to the fullest. She plays big in Oil & Gas and property.

The list definitely won’t be complimented without mentioning the wife of a popular billionaire Alhaji Oyedele Ibrahim widely known as Inaolaji, Ronke. She is beautiful with an intimidating stature. Ronke Inaolaji commands a lot of respect in Ibadan social circle.

Jadesola Qudus, the Iyalaje of Ede land, is a top textile merchant at Gbagi International Market in Ibadan. Her composure and style always stands her out in the crowd. She is one of female celebrities who dictate the pace in Ibadan social circle, with a powerful social network.

Barr. Angela Folarin is one of the few beautiful woman with excellent shape and of average height. The pretty wife of the former Senate Leader and a prominent Ibadan chief, OloyeTeslim Folarin, Angela is a polished woman with class and has high taste for quality. She pays great attention to details and you can never catch her dress shabbily.

Mrs Latifat Fowosere is the pretty wife of Ijebu paper merchant, Laide Fowosere. Fondly called O’baby, this pretty woman knows how to party right and you can never miss her style at any event.

Folashade Akinlabi Arowolo, popularly known as Fashad, is a major stakeholder in the textile business at Gbagi Market. Any social function Fashad finds herself, she must make a fashion statement. She wears strictly expensive jewellery.

She is the wife of the Ekiti-born politician and a front liner lawyer, Otunba Reuben Famuyibo. EreluSumboFamuyibo has been on the social scene for more than 2 decades, she has seen it all. Though she slowed down a little as far as social circle is concerned but still attends important functions.

Hannah Afolabi is one of the biggest society women in Ibadan. She is a big time business woman. She is very wealthy and has many investments. She is also a prominent Ibadan Golf Club member. Hannah Afolabi is the wife of late Osun-born politician Chief S.M Afolabi. She commands a lot of respect in Ibadan social circle.

She is the C.E.O Mauve 21 Event Centre and Hotel and wife of a retired General, AlhajiMuraino, former chief of accounts and budget of the Nigeria Army. She is a woman of good quality and great style. She locked Ibadan down when her son got married few months ago.

Debola Osibogun is an accomplished banker, a loving mother and the wife of a prominent socialite and Chairman, Space F.M Otunba Deji Osibogun. She has got the beauty and the brain.

Ronke Olunloyo is the second wife of the former governor of Oyo State, Dr. Victor Omololu Olunloyo. She is a popular businesswoman in Ibadan with connections across board. She has great personality and that explains why she is loved by many within and outside the social circle. Ronke Olunloyo derives great pleasure in other people’s happiness. She loves to socialise. Her hobby is dancing and cooking. Baba Obey is her favourite musician of all time.

Alhaja Bola Ologburo is the beautiful wife of an Ibadan top property expert and Chairman, Quickborn Nigeria Limited, Tunde Ologburo. She runs one of the biggest textile stores at New Gbagi and she is highly successful in the business. Her Lace & Fabrics Store at Gbagi is very popular. She also has a replica of Lace & Fabric Store inside Jericho Mall in Ibadan.

Barrister Funke Akinola is the wife of Ibadan prominent businessman and the Aare Musulumi of Yoruba land, Alhaji Dawud Akinola D-Damak. She is an elegant woman with a beautiful face and stature.

She is a former Federal House of Reps member from Oyo State and the wife of a prominent socialite, Tunde Osinowo (Teddy Shine). Folake is one of the colourful female politicians in Oyo State and she always makes a big statement at any social function she finds herself.

Ranti Koiki is an outstanding woman any day, any time. She runs an hotel, Fawzy in Ibadan. Her social connection is strong. She is tall and beautiful and wears strictly expensive shoes and bags.Her unique headgear stands her out at any party.

The wife of a prominent Quary expert, Demola Alimi popularly known as ‘DemolaOlokuta’, Yetunde needs no introduction in business and on the social scene. If you think her Y-Stone store around Ring Road is big then you have to visit ‘Mr. B Store’ at the New Gbagi market. Apart from textiles, Yetunde also deals in shoes, bags and other accessories big time. She is one of the young businesswomen rocking the social scene.

She is also a society woman who is most times seen with her husband at parties. The graduate student of foremost Pittman’s College for Secretarial Studies in London is the Yeye Meso, Lalupon in Ibadan. Her husband of over 40 years is Oloye ‘LekanAlabi, Agba Akin Olubadan of Ibadanland, and former GM of Oodua Group.

Folake is the pretty wife the senator representing Oyo South, Soji Akanbi. She is another beautiful woman who rocks parties with her husband.Hajia Folake Akanbi is a highly successful woman who has cut her teeth in the business world. She is also a humanitarian as she and her husband have made a habit of putting smiles on the faces of the less privileged for more than a decade. Together with her own, she runs the family’s aviation and tourism business. She resigned from her banking job to start Libragold, Al-furqan travels and tours with her husband.

She also runs a successful textile business at Gbagi market. Though young, she recently dazzled everyone when she commissioned a multi-million naira hotel, Palms 77 in Agodi, GRA Ibadan.

READ ALSO: LIFE HAS TAUGHT ME A LOT AT 50 – POPULAR ACTRESS, TOYIN ADEWALE

Life Has Taught Me A Lot At 50 – Popular Actress, TOYIN Adewale