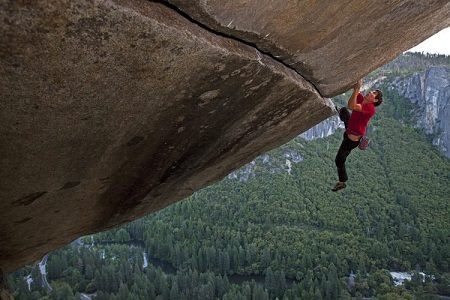 A man has set a new world record after climbing a really high granite wall without holding on to any rope at all.

Alex Honnold, a 31-year-old mountain climber from Northern California, recently became the first person ever to climb the 3,000-foot high El Capitan granite wall in Yosemite National Park, without any ropes or other safety equipment.
Hannold pulled off the historic, death-defying “free solo” climb on Saturday, June 4th, reaching the top of El Capitan in just 3 hours and 56 minutes. All he used as gear was a bag of chalk powder to improve his grip on the slippery granite.
To make his job a little easier, the young climber climbed the wall several times before, using ropes, and marked every toe and finger-hold he would use during his free climb, with chalk. Even so, the challenge was monumental, and his success prompted Alpinist Magazine to write “This is indisputably the greatest free solo of all time.”
READ ALSO: MAN JUMPS OFF PLANE 30,000FT OFF THE GROUND WITHOUT PARACHUTE (WATCH)
Alex, who is widely regarded as one of the best mountain climbers in the world, said that the challenge began as soon as he reached the base of El Capitan and put his climbing shoes on. “Because you look up and go, ‘that’s a f****** big wall,” he told National Geographic. “It’s like, pretty crazy.”
Obviously, things got really challenging once he started climbing.
First, there was Freeblast, a 10 pitch slab which Honnold says has sections that are “basically like walking on a sheet of glass.” Then he describes another difficult pitch that is “like this no-hands, foot traverse thing, where you’re just like, shuffling across a blank wall.” And that’s just the start, because things apparently get trickier the higher you go. “That’s before the [main] wall even starts, that’s just like getting up there,” Alex said.
The brave climber told the Associated Press that things get really hairy around 2,300-foot mark, where the holds used to ascend get so small that they can only be gripped with a thumb. To make sure that he was as able as he could be to tackle these extreme conditions, Alex spent hours every other day hanging by his finger tips and doing one- and two-armed pull ups in his van.
“With free-soloing, obviously I know that I’m in danger, but feeling fearful while I’m up there is not helping me in any way,” Alex said after the climb. “It’s only hindering my performance, so I just set it aside and leave it be.” Alex’s fearless approach to free solo climbing has attracted the attention of scientists who studied his brain to see how it copes with fear and if it is different than the average human’s, National Geographic reports.
By conquering El Capitan, Alex Honnold fulfilled a life goal he set for himself back in 2009, when he wrote it in his journal. He had been studying the monolith for years, and even though he once said that free soloing the monolith was out of the question, in his mind he always thought it was doable. Now the whole world knows it too.
Tommy Caldwell, one of the first two people to free climb El Capitan (using safety ropes and harnesses only to arrest a fall), called Alex Honnold’s achievement a “generation defining climb”.
“I have tried many times to mentally transport myself into the head of Alex Honnold,” Caldwell wrote on Facebook. “Looking for comfort in what I knew was inevitably coming. Last week, high on Freerider, I still could not fathom being up there without a rope. This was a generation-defining climb. … Good job, dude.”
Meet the Man Who Climbed 3,000-foot High Granite Wall Without Ropes (Photos) was last modified: June 7th, 2017 by Arinze Ago