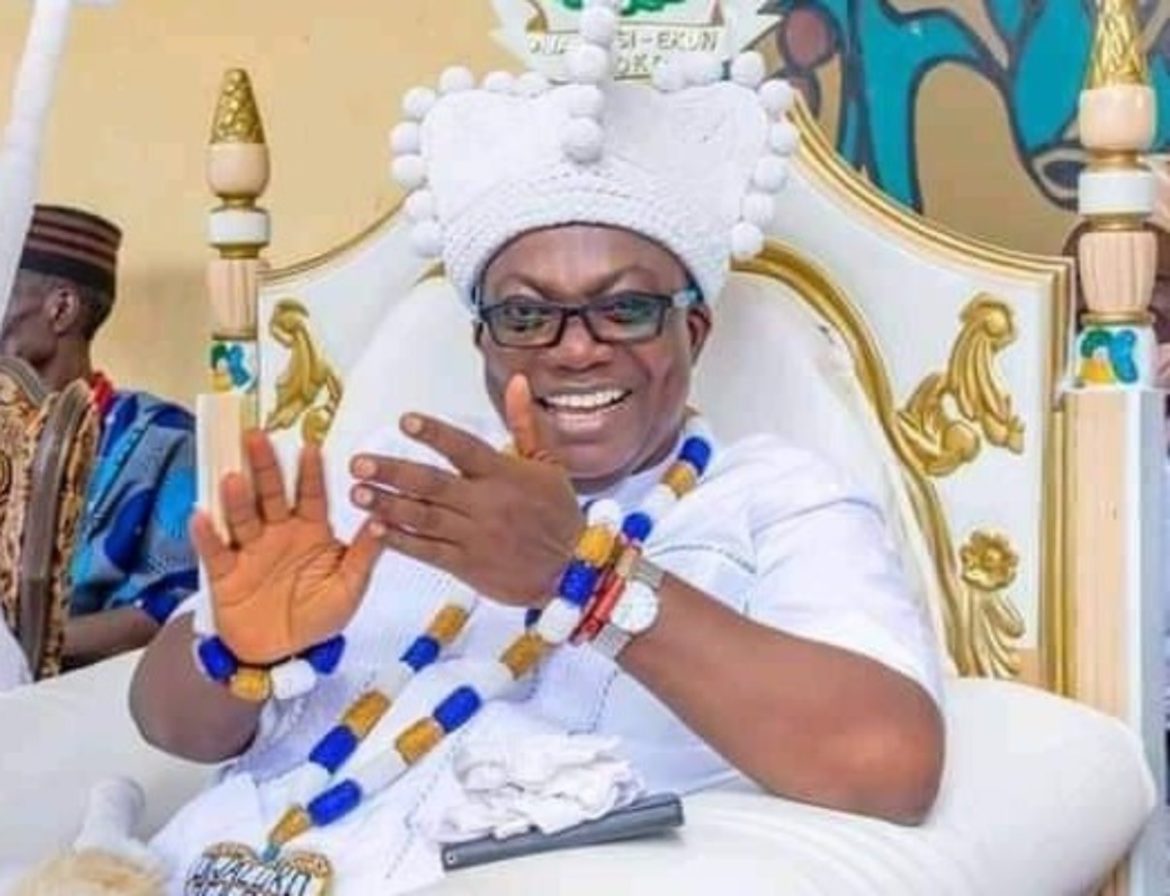 Saturday 24 July, 2021, a new history was made in Iloko-Ijesha, a town under the Oriade Local Government Area of Osun State. It was the day the state’s governor, Alhaji Gboyega Oyetola presented instruments and staff of office to the newly installed Owaloko of Iloko-Ijesha, Oba Olusayo Ogungbangbe, the Ajagbusi Ekun VI.

The historical and colourful coronation ceremony was attended by prominent sons and daughters of Iloko-Ijesha, captains of industries, politicians, market men and women as well as top traditional rulers in Ijeshaland and Osun State generally.

Oba Ogungbagbe, it would be recalled, was elected as Owaloko of Iloko-Ijesha on 26th August 2015. He won in a landslide victory by polling 11 out of the total 13 votes cast. But his confirmation came six years after the election. Governor Adegboyega Oyetola ratified and confirmed him as the substantive Owaloko of Iloko-Ijesha on 19 April 2021. His coronation was said to have been delayed for political reasons.

Now that Oba Ogungbagbe has been confirmed and presented with the staff of office, however, the expectations from him are just too numerous. The new monarch is expected to hit the ground running, in order to catch up for the years that Iloko-Ijesha has been without a king and at the same time surpass the achievements of the former Owaloko, Oladele Olashore, who was able to sketch Iloko-Ijesha’s name on the world map.

But for those who know Oba Ogungbagbe closely, to rally the desirable developments to Iloko-Ijesha won’t be a difficult task, going by his credentials, exposure and antecedents. He is, no doubt, the perfect choice for the throne.

He is a philanthropist, a social influencer, a community leader and a great mobiliser.

He has initiated, financed and executed several community projects like primary and secondary schools, Police stations, Road Projects, Mosques, Churches and others.

He is a chip off the old block. The late father, Alhaji Taiwo Ogungbagbe was the Chief Imam of Iloko-Ijesha and the founder of the first secondary school, Osowusi Muslim Commercial High School, Iloko-Ijesha.

Oba Olusayo Ogungbagbe was born in February 22, 1964, into the family of Alhaji Benjamin Oyediji Taiwo Ogungbanghe and Princess Victoria Ogungbangbe.

He attended L.A Primary School and Osowusi Muslim Commercial High School, Iloko-Ijesha, for both his primary and secondary education, respectively.

He obtained his A-level Certificate at Oyo State College of Arts & Sciences, Ile-Ife.

He then proceeded to the Premier University, the University of Ibadan, where he studied Linguistics and graduated with B.A. (Hons) in Linguistics in July 1987.

After his one year mandatory National Youth Service programme at Command Secondary School, Zaria Road, Jos, Plateau State between August 1987 and July 1988, Oba Ogungbagbe launched himself into the professional world.

His area of interest are Advertising and Marketing Communications.

He rose through ranks at Ogilvy, from Trainee Media Executive to Group Head, Client Service and Media.

Having gathered more than enough experience, Oba Ogungbagbe resigned from Ogilvy Benson & Matter Nigeria Limited in year 2000 to float his own company.

Today, he is a founder, co-founder and core investor in a thriving group of companies in the field of Advertising. Digital Printing. Agriculture, Hospitality and Transportation/Logistics.

He is a registered Member of The Advertising Practitioner Council of Nigeria (APCON).

He is happily married to Olori Modupeola Kikelomo Ogungbagbe from the popular Obanla Jimoh Joseph Ibironke family of Ita-Offa, Ilesha and their union is blessed with four lovely children.

READ ALSO: ALL YOU NEED TO KNOW ABOUT ALL THE BBN HOUSEMATES

All You Need To Know About All The BBN Housemates

Why SURULERE People Should Vote For Hon....