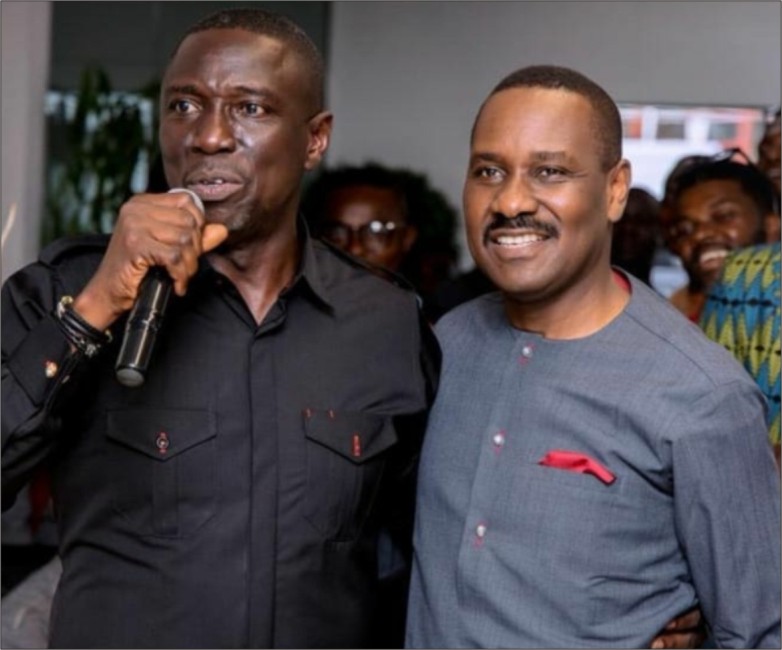 •The Story Of ASUE IGHODALO, The Corporate Lawyer

Until he came out a few days ago to give the vote of thanks at the burial service of his sister in law, Ibidun Ighodalo, many didn’t know who Asue Ighodalo is. This is because Asue who is the brother of Pastor Ituah Ighodalo had lived a very quiet life all these years, preferring to face his corporate law practice. He is rich and well connected like his brother. He is known more within the corporate world.

Within the corporate sector, the name Asue Ighodalo surely rings a bell. The foremost and astute lawyer is the elder and only brother of Trinity House Church Pastor, Ituah Ighodalo. For some, not until the death of Pastor Ituah’s wife, Ibidun Ighodalo, many people had not come in contact or even know him. He is a very quiet lawyer, highly revered and prominent within the corporate sector. He is also one of the many respected lawyers in his field. He is not one who adores social prominence because he is strictly a corporate person. Though he has many friends who cut across the social space but he rarely attends social functions except very close and important.

Saying he is super rich is simply stating the obvious because he lives large and can have anything money can buy at his disposal. He drives exotic cars and stays in a posh mansion in Lagos. He is married to the elegant interior designer, Ifeyinwa Ighodalo who also turned 60 few months back.

Ibidun’ s death shocked Asue to the bone marrow and for someone who also shares the same birthday date with him, it was a bad one as he will virtually remember Ibidun anytime he celebrates his birthdays. It was this sudden death that made him trend on social media as he supported his only brother, Ituah throughout the trying period, and also made the vote of thanks during Ibidun’s burial where he revealed their closeness as his only brother, how they were brought up and how they will forever cherish Ibidun. You might not see Asue and Ituah Ighodalo together all the time, because of the type of different work schedule that they have, but they are very close. They grew up together under same umbrella for many years when they were growing up in Ibadan and have they became adults, their relationship as close siblings never diminished.

No wonder, they both have a nickname they call each other. Despite the few years age difference between them, they relate very closely, they do things together, their family are close knit and one common thing spectacular about them is that, they have a circle of friends who are very prominent within the society. Both Asue and Ituah are very successful and their success transcends all sectors as they have their hands in many businesses. They sit atop major companies as directors. So, few days ago, Asue Ighodalo made some shocking revelations about his brother, late wife and family as a whole.

In his words at the funeral, he said, Brusta, I call Ituah, Brusta up till now, his church people have tried to dissuade me but it is difficult, it is something we shared for 40 to 50 years so I am so used to it. I share a deep relationship with Ituah and his wife. Ituah called me about 6.30 am that fateful morning to tell me about his wife’s death. I did not get myself because I call Ibidun my twin but to cut the story short, when I caught up with Ituah that day, I could not believe his strength, I was just watching him. I begin to wonder what kind of man is my brother. Ibidun is my twin. We were born on the same day but different generations. She is my friend, my daughter, my wife. What she could not tell Ituah she will tell me first then we work it out with Ituah. From that Sunday morning, I drew strength from Ituah,  Ituah was the one that gave Ibidun’s mum strength. Then same morning, Ituah said he had to conduct a funeral, he was the one that consoled all the brothers and sisters of the young man that died, when people could not even believe whether it was same morning the incident happened or not, I was just watching him and I drew strength from this. Brusta, you are the real guy, God almighty will always be with you. Thank you for being Ibidun’s husband. We were brought up to let our spouses fly so thank you for letting Ibidun fly”.

He remarked by thanking all his friends and families who graced the funeral service.

Asue Ighodalo, a lawyer alongside Femi Olubanwo, were the founding partners of the law firm of Banwo-and-Ighodalo a corporate and commercial law practice in Nigeria. He is also the chairman of Sterling Bank, Director, NSIA – Nigerian Sovereign Investment Authority and Chairman NESG – Nigerian Economic Summit Group.

Asue Ighodalo is a product of King’s College, Lagos. He obtained B.Sc degree in Economics from the University of Ibadan in 1981, an LL.B from the London School of Economics and Political Science (1984) and a B.L from the Nigerian Law School, Lagos (1985). He his highly connected and has many super big boys as friends. Some were also at the funeral service to honour him. Some of this his friends were his school mates right from colleges. They also grew up to become inseparable. Some of those he mentioned were City of David Pastor, Idowu Iluyomade who is also a lawyer, he also attended university of Ibadan, and sits atop big companies like Axiom IT systems, visible Assets, Aboil Energy Services etc. Former CBN Governor and a Emir of Kano, Sanusi Lamido Sanusi is also one of his highly revered and powerful friends. Ex-Ogun Governor, Gbenga Daniel who is also the chairman of Krestal Laurel and Otis Limited. Dangote Group Chairman, Alhaji Aliko Dangote, Pastor Tony Rapu, who runs the This Present House Church and many other companies. They have both been friends since age 10 at Kings College. Ondo Governor, Rotimi Akeredolu is also one of his close friends, he was at the burial and many others.

Asue and Ituah Ighodalo grew up in Ibadan, had their early and tertiary education also in Ibadan though they hailed from Ewohimi in Edo State, their mum, is from Ondo State. Their parents are very prominent. They both have an elder sister, Tolu.

Upon graduation from Nigerian Law School, Asue worked as an Associate in the law firm of Chris Ogunbanjo & Co and in 1991 he set up Banwo & Ighodalo in partnership with Femi Olubanwo. The firm today is consistently ranked as a leading Nigerian law firm in the areas of Capital Markets, Securities, Mergers & Acquisitions. He has authored many articles in leading law publications. He sometimes lectures on corporate governance, directors’ duties and responsibilities, and entrepreneurship at the Institute of Directors, Lagos Business School and FATE Foundation entrepreneurial training sessions, respectively.

Ighodalo became the Chairman of Sterling Bank in August 2014. He is a member of Nigerian Bar Association (NBA), and is the immediate past chairman of The NBA – Section on Business Law (NBA SBL). Asue has been consistently ranked as a top-tier lawyer in all of his areas of practice by the leading legal directories. His brother, Ituah is a 1981 graduate of Economics and Accounting from the University of Hull, U.K., Pastor Ighodalo trained and qualified as a professional with the firm of Price Waterhouse Coopers in 1986. He is a Fellow of both the Institute of Chartered Accountants of Nigeria and the Nigeria Institute of Taxation. As former Managing Partner, Ighodalo & Co, he brings to the firm 20 years of experience in Auditing, Accounting, Taxation, Human Resources and Financial Advisory Services. Ituah sits on the board of many publicly quoted companies and is the Publisher/Editor-in-Chief of the TIMELESS Media Group, Chairman Trinity Media and Films, Celebr8 Music Festival and producer Courage Centre TV series. He has written and published several articles, papers and books.