Meet Some Celebrity Women We Wrote About 25 Yrs Ago 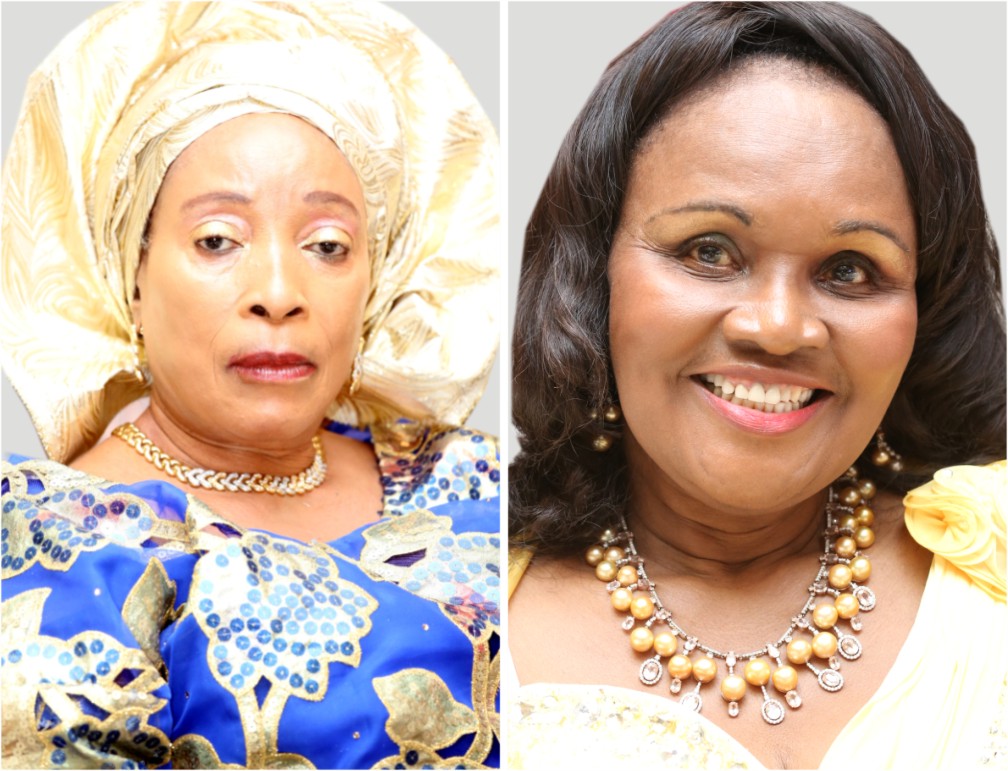 City People is 25. And in the spirit of our ongoing 25th Anniversary celebration, City People Magazine has decided to publish a list of some of the celebrity women we wrote about in the early days. Below are some of them and what they do now.

In those good old days, Alhaja Mutiat Yinka Ladoja was very popular on the scene in Ibadan. She was the 1st lady of Oyo State and wife of Senator Rashidi Ladoja. She is naturally beautiful. She is stylish. She is blessed with natural black skin. She loves the natural look, nothing artificial. She uses local ori as body cream and prefers to plait her hair the traditional way (Didi). She also applies only the local tiro. No makeup.

Since her husband left office, she has lived a low-key life in Ibadan. By the way, do you know she is an Ibadan woman and a respected one for that matter?

Just like her husband, she is one of Olubadans Chiefs. A few days ago, the Olubadan, Oba Saliu Adetunji elevated Alhaja Mutiat Ladoja to the position of Agbaakin Iyalode of Ibadanland, though, she prefers to live a low profile lifestyle and allow her husband, who is a political icon, take the shine.

There is also Beere Derinsola Osoba, the beautiful wife of Aremo Olusegun Osoba, the Akinrogun of Egbaland and 2 term Governor of Ogun State. City People wrote a lot about her in those good old days in the 90s when her husband was Governor. She was always in the news then. But once she left public office, she went back to her 1st love – Teaching. She runs a school, Ocean Crest School in Lekki.

It is the same thing with the Yeye Oge of Lagos, Chief Mrs. Opral Benson. At the time City People started in 1996, she was always in the news with her late husband Otunba T.O.S. Benson. She has lived a good life.

She loves to dance. And she likes to wear high heel shoes. She is from Liberia, but she is a naturalised Nigerian. She is aging gracefully. She is in her 80s. And she has slowed down considerably on socials.

Sisi Abba is another celebrity woman we wrote a lot about in the early days. Hajia Abba Folawiyo is a celebrated fashion designer and a matriarch of the fashion industry. In her days, she was a leading society woman. Age has mellowed her. She is in her 80s. These days, she hardly attends parties except it is absolutely important she attends.

There is also Chief (Mrs) Lanre Otiti, the popular Ibadan female politician. In the early days of City People, she was very active socially.

She was also into politics. She has since slowed down. She is aging gracefully. She has remained the stylish lady she is. She is the Ikolaba Iyalode of Ibadanland.

There are others like Hajia Ronke Ayuba, the beautiful Newscaster who read the NTA Network News at 9 pm daily, for years before she went off the scene. She is married to a retired General, Gen. Tanko Ayuba.

She has other contemporaries who have also gone off the scene like Sienne All Well Brown and Ruth Benamesia-Opia. They are all married to rich men. They have all left active Broadcasting.

There is also Alhaja Bose Adedibu, the beautiful and robust wife of late Ibadan strong man, Alhaji Lamidi Adebutu. Years back, when her husband was still alive, she was the life of very many parties, because everyone wanted her to be at their party.

Since her husband’s exit, she has kept a low profile, choosing to attend only important events. She wasn’t too happy that many of those who were close to her, abandoned her family because Baba is no more.

Erelu Abiola Dosumu has also gone low profile. She is the Erelu of Lagos. We wrote a lot about her from the first set of editions. She was much younger then. She was in her 50s. Now she is in her 70s. She is still her elegant and stylish self, but age has mellowed her a bit. She hardly attends parties these days. She only came out during the #ENDSARS protest when the palace of the Oba of Lagos was vandalised and went back into her shell after. She lives in the Pent House of her highrise in Victoria Island, Lagos.

Let’s tell you also about Ajoke Mohammed, the widow of late Nigerian Head of State, Gen. Murtala Ramat Mohammed. Age has slowed her down a bit. Though she is hale and hearty, she has decided to take things easy. She runs a thriving Horticultural Garden and Florist Shop in Lekki, Lagos.

Where is Chief (Mrs.) Remi Adiukwu, the popular female Lagos politician who is an APC top shot? She has kept a low profile for years now.

Where is Tina Ogundoyin, popularly called The Queen of Sheba in Ibadan? This pretty woman has been quiet for years. She has kept a low profile. She is the widow of late multi-millionaire, Femi Ogundoyin of Femo Scorpion FC of Eruwa.

Where is Princess Adesola Areago-Elegbede? She is the widow of late Vice-Admiral Elegbede. She was a popular society woman in those days but she quietly withdrew into her shell years back.

Where is former Minister, Mrs. Kema Chikwe? She has been off the scene. Though, she is still in politics, she has been quiet. Where is Hajia Khairat Gwadabe? Very many years ago, she was referred to as The Queen of the Senate. The delectable lady is married to Col. Lawan Gwadabe. She is Kwara Governors sister.

Where is Toks Ogunsanya? In the early year 2000, she was one of the popular celebrity women we wrote about. She is the wife of the owner of the famous Ivory Health Club, Tayo Ogunsanya. They are blessed with a set of look-alike Quadruplets who have today become Big Boys. Tayo & Toks got married in January 2000 and their Quadruplets played prominent roles. It was a colorful event as the 2 Boys were Best Man, while the Girls were The Bridemaids.

Where is Chief Mrs. Lanre Ojora, the widow of late Bade Ojora of Mobil Oil Fame? She has been off the scene for years. In those good old days Sisi Lanre was Hot as she would wear lovely outfits that accentuated her feminity.

Where is Mrs. Kehinde Kamson, the lady who owns Sweet Sensation? She has been off the scene for very many years, choosing which parties to go to.

Where is Toru Ofili, the beautiful Port Harcourt lady? She is the lady behind BOF Design Gallery, an interior and exterior furniture making and marketing company. The company is jointly owned with BOF Ofili, her Architect husband. She served as a Commissioner in Rivers State.

Where is Rosemary Okeke-Wright, the former Miss Nigeria who raised quite a storm during her reign. She got married to Adekunle Wright.

Where is beautiful Lagos banker, Tina Vukor Quarshie (TVQ). In those good old days, she was a Big Girl at Zenith Bank. She has since left active banking.

There are others like Mediline Tador, former Journalist and ex-Rivers State Commissioner, Edith Umuigbe, the former LNG Company Secretary. She is rich. There are others like Ndidi Anyachi. She is the lovely lady who owned a top shop on the Island called Designers Club. There is also Sharon Ikeazor, Enitan Allen, Anana Okwesa, Jennifer Eguegu, Queenette Alagoa who sold Gold.

At that time we wrote a lot about Angela (Uche) Chikelu. She is one of the Chikelu sisters.

There is also Biola Thomas, the lady behind Fabrique Fair. She sold laces materials; Vivian Agbonkhese, the pretty lady behind Pretty Perfumes an exclusive perfume shop at First Capital Plaza; Sola Obakoya, the shoe lady who owned Shoes et al on Awolowo Road, Ikoyi; Zizi Cardow the fashion designer who was 31 then. She is one of the big girls who lived in Ikoyi and ran her fashion outfit filled with African fabrics and designs.

We also wrote about Folake & Sade Kasim, popularly known as the KAS Chicken Sisters.  They ran the Ikeja outlet of their late fathers fast food business which started in Surulere, Lagos. There are others like Annabel Fynecountry who used to live in Abuja, Folake Akindele, the daughter of late Ibadan billionaire, Chief Bode Akindele who used to be Folly Coker’s wife. She is the lady behind Tiffany Amber. She was 25 then.

Where are others like TV stars, Funmi Iyanda, Davida Okpara, the lady behind DAVIDA Shirts, Vien Tetsola, ex-Miss Nigeria?

In those good old days, we wrote about Enitan Allen, Abike Dabiri & Funmi Ajila-Ladipo, the 3 musketeers.

One other lady who we used to write about in those good old days was Maureen Onigbanjo, popularly called Maufechi. She was one of the hottest fashion designers at that time. Though, she runs her high brow. Maufechi fashion house, she has kept a low profile. She is also aging gracefully.

Where are the Boardman Sisters? They are 4 adorable sisters who everyone likes. They often attend top society parties on account of the fact that they know a lot of people. There is Lydia, Isabella, & Ronke. There is also Funmi Ayandokun who now lives in London.

There is Uche Majekodunmi, the face behind Newton & David. She is top-notch. She handles all the big celebrity weddings and funerals. Her Newton & David Floristry has always been No 1. She gets called from time to time to decorate wedding venues with her breath-taking flower arrangement.

Over the years she has earned her reputation as one of the renowned florists in Nigeria.

Where is Alhaja Wosila Demola-Seriki? When City People started 25 years ago, this elegant stallion was one of our favorites.

She is blessed with a beautiful daughter, Bisola Dejonwo.

Where is Yetunde Ogbemudia? She is the widow of late Brigadier Samuel Obaigbovo Ogbemudia, the former Governor of Old Bendel State and late Sole Administrator of Nigeria Railway Corporation. They got married in 1999. She is a top fashion designer of choice for many celebrity women. Quite industrious, she runs Nodoni Fashions.

Meet Some Celebrity Women We Wrote About 25 Yrs Ago was last modified: March 31st, 2021 by City People

How Gov. WIKE Tried To Reconcile The LULU-BRIGGS Family