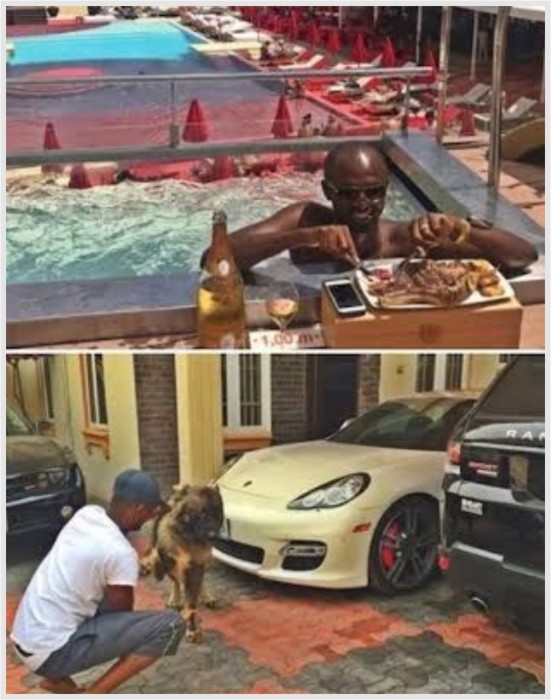 Currently topping the list of Island big boys, Jowi Zaza is another Lagos king of money and he spends it without caring whose ox is gored. No wonder, many Island big boys and babes are currying his favour and wanting to become his friend. He strictly paroles with the rich. He has them in a hand full and they are termed the “big ballers” at parties. No party is complete without him. Many clubs seek his patronage because he is unapologetic when it comes to spending.

Hardly will you see him around because he travels all around the world touring major expensive tourist attractions in the world. His real name is Joseph Eze Okafor Jnr but many people know him by his nickname, Jowi Zaza. He is an entrepreneur and philanthropist born on March 1985. Jowi Zaza is one of the youngest millionaires who loves to enjoy life to the fullest. He has traveled to many parts of the world such as London, Turkey, New York, The Caribbean, Al Jumeirah in Dubai and so on. Jowi happens to be friends with the likes of Prettymike, Obi Cubana, Cubana Chief priest, to cut it short, all Lagos big boys roll with him. He has different expensive cars in his garage including a Lamborghini Aventador, which is said to worth a whooping sum of 115 million naira. He is the 35-year-old son of Jezco Oil Boss, Chief Sir Joseph Ezeokafor Snr who was born on 30th April 1952. He started the company in 1980 and by 1988 it became a fully licensed oil service and independent marketer of petroleum products. Chief Joseph is a mega industrialist, who also owns a lubricant factory and a plastic manufacturing factory. Chief Joseph Okafor is reportedly worth $2 billion dollars. He has five daughters and two sons. Jowi Zaza is the heir and current Managing Director of Jezco Oil. Jowi doesn’t dull himself when it comes to spending money. He spends in a way that people know that there is enough to spend lavishly. He likes to flaunt his expensive lifestyle on Instagram so his followers can see how he lives day to day, have you talked about his Snapchat? OMG that is another world of Jowi Zaza, if you are on his snap you can know all his movements. Ladies love Jowi because of his expensive lifestyle. He does everything for the gram, the girls love Jowi so much.

He recently presented his father with a car birthday gift. The philanthropist father was gifted a Rolls-Royce Cullinan. Jowi Zaza has been reported to be one of the money bags in Nigeria as his worth hundreds of millions of naira. Zaza has been living his life on a low key and people barely know much about him. Until he started showing off on Instagram. Jowi Zaza’s love for white is unbreakable as he poses close to his brand new Lamborghini Aventador worth N115 million, he gifted himself this car on his birthday and posted it on Instagram to celebrate with his friends. This car aims to bring the future forward. This is a true supercar legend in the making, which combines the tradition of the Lamborghini brand with a level of innovation which takes the House of the Raging Bull to hitherto unexplored territory. He calls his four white cars the fantastic four, this is yet another addition to his luxury fleet of cars. He made his garage appealing to the eyes with his color combination. What about his mansion? It is out of this world. Jowi Zaza happens to be used to replace Hushpuppi, his way of living experience is far from what hushpuppi does. Follow Jowi Zaza on Instagram and see how his day to day life goes.