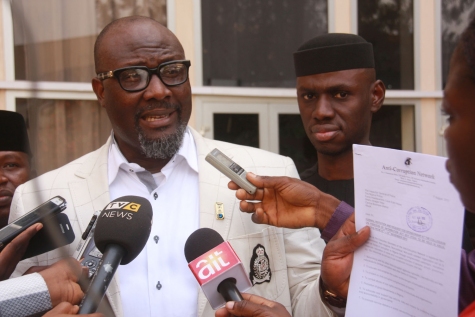 The media aide to embattled senator Dino Melaye,Gideon Ayodele has said that his principal is currently at the Police Medical Centre in Lokoja, the Kogi State capital, hours after a magistrate remanded the senator in police custody.

He said the lawyers believe the decision to remand Mr Melaye in police custody was flawed.

He noted that the team would spare no effort in ensuring that Melaye does not spend six weeks in custody as ruled by Mr Abdullah.

“It is important that we approach the Federal High Court tomorrow morning,” Ayodele added.

The police arraigned Mr Melaye before a Chief Magistrate’s Court in Lokoja on Thursday on seven counts of criminal conspiracy and unlawful possession of firearms.

Sulyman Abdullah, a senior magistrate in his ruling said Melaye should be remanded in police custody till June 11 but the Inspector-General of Police must provide essentials for his health.

According to his lawyer, Mike Ezekhome, the police had insisted that Melaye be remanded in prision despite concerns from other lawmakers at the National Assembly.

At Thursday’s plenary in the House of Representatives, Speaker Yakubu Dogara warned the police to be professional with Melaye’s case, saying his health should be prioritised.

“I have not seen in any country where someone is arraigned in court on stretchers when he or she is not fit to plead guilty or not guilty,” Mr Dogara said. “If anything happens to him, (Dino) the responsibility will be on the security agency,” Dogara had said.