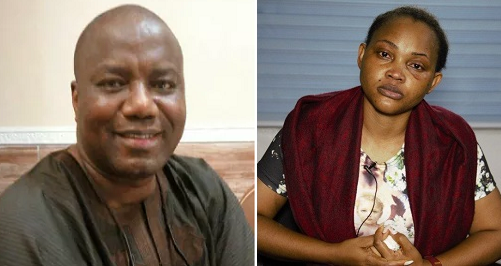 A few hours after Mercy Aigbe’s estranged husband, Lanre Gentry was released from Kirikiri , he stated that the government should focus on more important issues in Nigerian rather than involving themselves in Domestic Violence.

Like I have said earlier. I have something to tell the world due to my fresh experience at the medium prison, (Kirikiri apapa) but firstly I’ll like to glorify the Almighty God for his grace upon my life…..at this moment I would say @realmercyaigbe’s effort sending me to jail was another privilege to see, say about all which is going on over there.

I think this place should be a rehabilitation centre and not a dumping ground. 7days and 7night at the medium prison looks like have spent a whole year inn there..y? Just because our government has a lot to do over there and nothing has been done over there… over 3600 prisoners,where we are meant to have just 15000 prisoners. Prisoners are now more or less like beggers.

I have been there not that am being told people die every blessed day.. am here to tell the world to please lets fight this out with our government because I see no reason why tax are being collected and nothing has been produce and provided through all this payment, is it that they’ve forgotten this people are still Nigerian citizens?, If I may ask .government shouldn’t leave what they ought to do and start involving theirselves over (domestic violence)… I won’t say more than this tonight..but more to come every night.I mean no harm to no one but to whom it may concern.

His post has gotten some reactions from some of his followers. Many are of the opinion that he just “agreed” and “admitted” that his wife suffered from domestic violence.