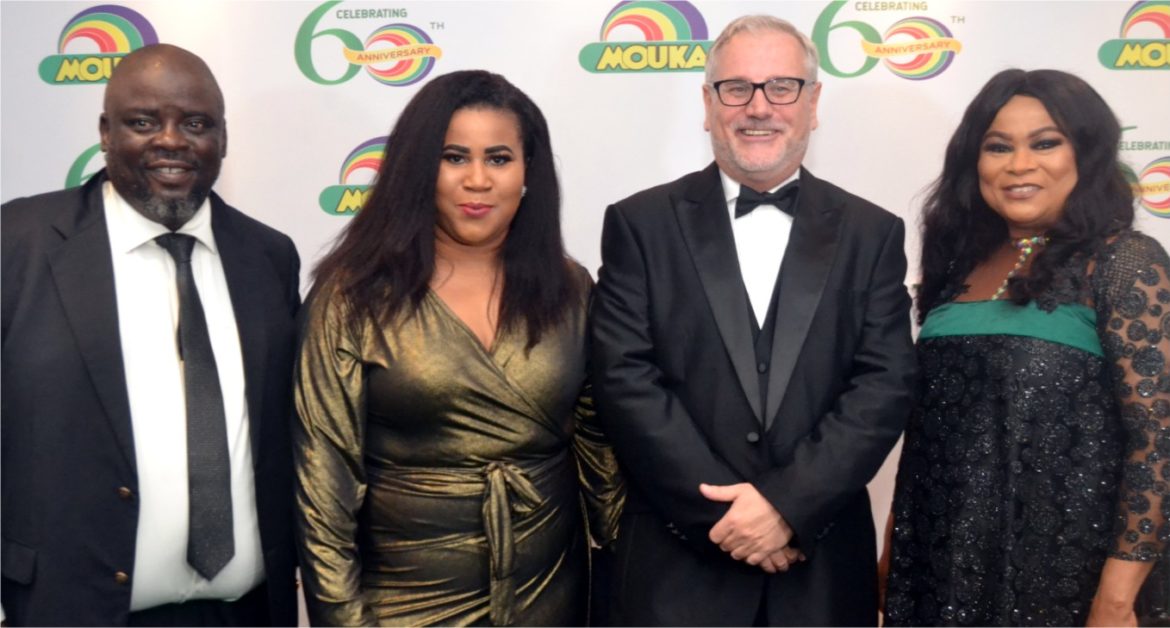 Family, friends, partners, distributors and customers of Nigeria’s topmost player in the foam and mattress business, Mouka Foam, were given a treat of a lifetime on Saturday, November 9, at the prestigious Eko Hotel and Suites in Lagos. The event was the gala night, a programme scheduled to conclude the activity-packed 60th-anniversary celebration of Mouka Foam. Class, Glitz and Glam are the true definition of the overall flow of the grand finale as men of timber and calibre within Nigeria and overseas came to show their love and support for the bring brand. City People’s DAMILARE SALAMI was there and he brings you gists from the event, enjoy.

BLACK AND A TOUCH OF GREEN TAKEOVER

As the guests walked in majestically on the evening of fun, entertainment and brand loyalty, something very peculiar about the section of the Eko Hotel and Suites earmarked for this event was the prevalent black and a touch of green by virtually everyone in attendance. The colour code made the event stand out as everyone looked posh in their different outfits of the same colour combination.

An event of such magnitude cannot just hold anywhere in Lagos. The choice of the Grand Ballroom auditorium of the Eko Hotel & Suites was just a perfect place as it houses over one thousand guests who came in from all walks of life to show love to their ever-trusted and reliable brand which has from one generation to another taken care of the comfort of many Nigerians for six decades.

At about 5:00 pm, beautifully dressed ushers were already positioned at strategic points at the entrance of the auditorium. They were busy greeting guests with all sorts of cocktail drinks, snacks and fruits before the main event started. It was a time for old time friends to catch up and new friends to be made. This period was well utilized as guests mixed with one-another freely without any barriers. Of course, a new business would be birth and that is what Mouka is known for; uniting people in a conducive atmosphere.

Okechukwu Anthony Onyegbule, popularly known as Okey Bakassi was one of the top celebrities that were sighted at the event. He was also the anchor and he added his wealth of comedy experience to the show. Guests were thrilled at the way he launched his mature jokes and everyone laughed out loud without any hard feelings. He was equally saddled with the responsibility of welcoming the guests which marked the official commencement of the night of fun.

The event would not be completed if the mention is not made of the vintage band. An apparently cool dark and quite empty room was all of a sudden filled with the beautiful tunes oozing out of these young and vibrant talented Nigerians. The Vintage Band is not just another music group, it is a band of skilful and well-trained musicians who know how to arrange sounds for the listening pleasure. They performed different tunes from the oldies and also the current trend. The guests undoubtedly wanted more but time wouldn’t permit them to do more than they did.

The atmosphere at the Green Gala Night set by Mouka, at its 60th anniversary gala night last weekend sparkled with the appearance of top Nollywood veterans and stars and On-Air Personalities. First on the list was Sola Sobowale, a Nigerian film actress, screenwriter, director and producer. Who recently won an African award for her role in a blockbuster, King of Boys. Other celebrities in attendance include Adebayo Davies, an actor (Baba Landlord in Flatmates), Chioma Omeruah, (Chi gul) an actress and comedian, LotachukwuUgwu, an actress (popularly known as Kiki in the TV series Jenifa’s Diary), Arese Ugwu, author and social media financial expert (popularly known as Smart money Arese), SisiYemmie Blogger, Vlogger and all-round creative to complete the galaxy of stars at the night.

Sobowale, while responding to journalists’ questions, described quality sleep as a necessary ingredient to a healthy and productive life of a busy professional like her, while thumbing up for the Mouka brand.

MOUKA FOAM CEO THANKS NIGERIANS FOR 60 YEARS OF BRAND LOYALTY

Mouka Foam Chief Executive Officer (CEO), Mr Raymond Murphy at the Green Gala Night to round off the 60th-anniversary celebrations of Mouka in Lagos last weekend, thanked the customers and stakeholders for standing by the mega-brand in the last 60 years. He explained that the last 60 years had been eventful for the company in terms of job creation, value creation for stakeholders and business partners and high level of governance compliance, among others.

“I thank Nigerians for remaining loyal to the Mouka brand for the last 60 years. Our vision is to move Mouka from being a good company to a great company” Murphy said.

According to him, while the company pays out taxes accurately and on time, it also contributes back to society through donations and contributions to the local communities where it operates.

Corroborating the view of the Managing Director, Mr Femi Fapohunda the Chief Operating Officer explained that Mouka has continued to grow from strength to strength as others faltered and failed, adding that Mouka sees IT as a major enabler across its business.

“We continually invest year after year in upgrading our manufacturing facilities and ensure that they operate to the highest local and international Health, Safety and Environmental Standards,” he said.

HEAD OF MARKETING, TOLUOLANIPEKUN REVEALS WHY MOUKA IS STILL RELEVANT AT 60

Mouka’s Head of Marketing, Tolu Olanipekun, listed unrivalled Quality, Availability, Product Warranties, and 60 years of consistency as the unique features that have sustained the smooth sail of the company over the years.

Ahead of the 60th anniversary, it has been a harvest of laurels for Mouka. For instance, the foremost foam manufacturing company won an Iconic brand of the year at the Marketing World Awards which held in Accra Ghana last week. Mouka was also recognized last month by the National Employers Consultative Association (NECA) for a safe work environment

Earlier, the company was endorsed by the Nigeria Association of Orthopaedic Manual Therapists (NAOMT). The endorsement comes on the back of consistency in quality delivery and innovative mattress production.

Mouka has also been recognized twice by the London Stock Exchange Group (LSEG), in the group’s Companies to Inspire Africa report.

The company was listed in the – LSEG’s companies to Inspire Africa 2019 report after it made the 2017 inaugural edition. Murphy Mouka said the foam company had to work earnestly to consolidate its performance in the sector to make the list of companies to inspire Africa for the second consecutive edition.

Her beautiful voice filled the auditorium like the sound an angel, everyone had wondered who the performer was before she appeared on stage. Alas, it was the beautiful woman with a sonorous voice, a veteran singer and dramatist, Yinka Davies. She single-handedly demonstrated how Mouka foam had been a part of everyone’s life from cradle till adulthood.

The foundation for Mouka was laid 60 years ago in the historic city of Kano when the scion of the FaizMoukarim family started the Moukarim Metalwood factory to manufacture furniture and iron beds. Since then, Mouka has gone into the manufacturing of foam and spring mattresses, as well as other bedding products at its three production facilities across Nigeria. The company has also developed an extensive distribution network with more than 1,000 branded sales outlets nationwide. It is manufactured and marketed by Mouka Ltd, a company with specialities in home and office furniture. Examples of other products manufactured by the company include pillows, duvets, industrial sheets, etc. Mouka Foam has a long distribution chain, with some three hundred and fifty multi-generational distributors in Nigeria. It also has more than a thousand branded sales points across the country. Its production facilities are strategically located across Nigeria. Indeed, it has achieved brand loyalty status and received several local and international recognition, including the “Mattress Brand of 2017” award bestowed on it by the African Brand Congress Nigeria. It has a state of the art.

How I Plan To Turn Around MOUKA...

Why Poshglow Is The No 1 Skincare...