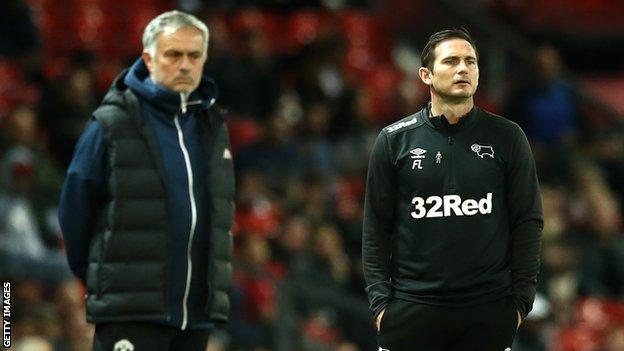 Learning from Jose Mourinho, trusting the kids and the balancing act of being a good manager, husband and dad – Chelsea boss Frank Lampard has talked about it all with Gary Lineker.

In an interview for Football Focus – which is on BBC One on Saturday (12:00 GMT) – the former England, Chelsea and West Ham midfielder discusses expectations and the club’s aims for the future.

The 41-year-old talks about how it will be “special” to face former boss Mourinho when Chelsea travel to Tottenham on Sunday (16:30 GMT).

Three years after retiring from a 21-year playing career, Lampard is in his first season as a Premier League manager.

Having implemented a fast and fluent brand of football since becoming Chelsea manager in July, Lampard has shown he is a quick learner after spending the last term cutting his teeth in the Championship with Derby.

And with the club occupying fourth place in the Premier League, Lineker asked if there were parts of the job he still had to come to terms with.

“You need really good people around you, particularly a good wife because they are the ones that can really take it, like a loss and your evening can be slightly ruined which is sometimes my fault because I should be able to let go,” Lampard replied.

“I’m trying to get a little bit more balance. But I haven’t mastered it yet. If you’re going to be on that much of a knife-edge that isn’t actually very nice living. That’s where the family can be very important.

Sunday’s match sees Lampard face Mourinho – who managed him during two spells in charge of Chelsea – for the first time in the Premier League.

And Lampard has long acknowledged the Portuguese boss’ lasting influence on his career.

“The detail he and others brought to Chelsea was so forward-thinking at the time,” Lampard told Lineker.

“Every training session had immense detail and was planned and structured so that you’d know what you were doing from the start. I don’t think that was so evident for me before that, it was more you’d turn up for training and it would just happen.

“He would give you reasons for what was happening and it would be on the clock. That was something I certainly appreciated as a player and the modern player expects now. I liked that and responded well to that.”

READ ALSO: WHY FG WILL GO ON WITH HATE SPEECH BILL – LAI MOHAMMED

Mourinho Taught Me All… Lampard Hails Former Boss As Both Teams Set To Clash was last modified: December 20th, 2019 by Damilare Salami

Why FG Will Go On With Hate Speech Bill – Lai Mohammed