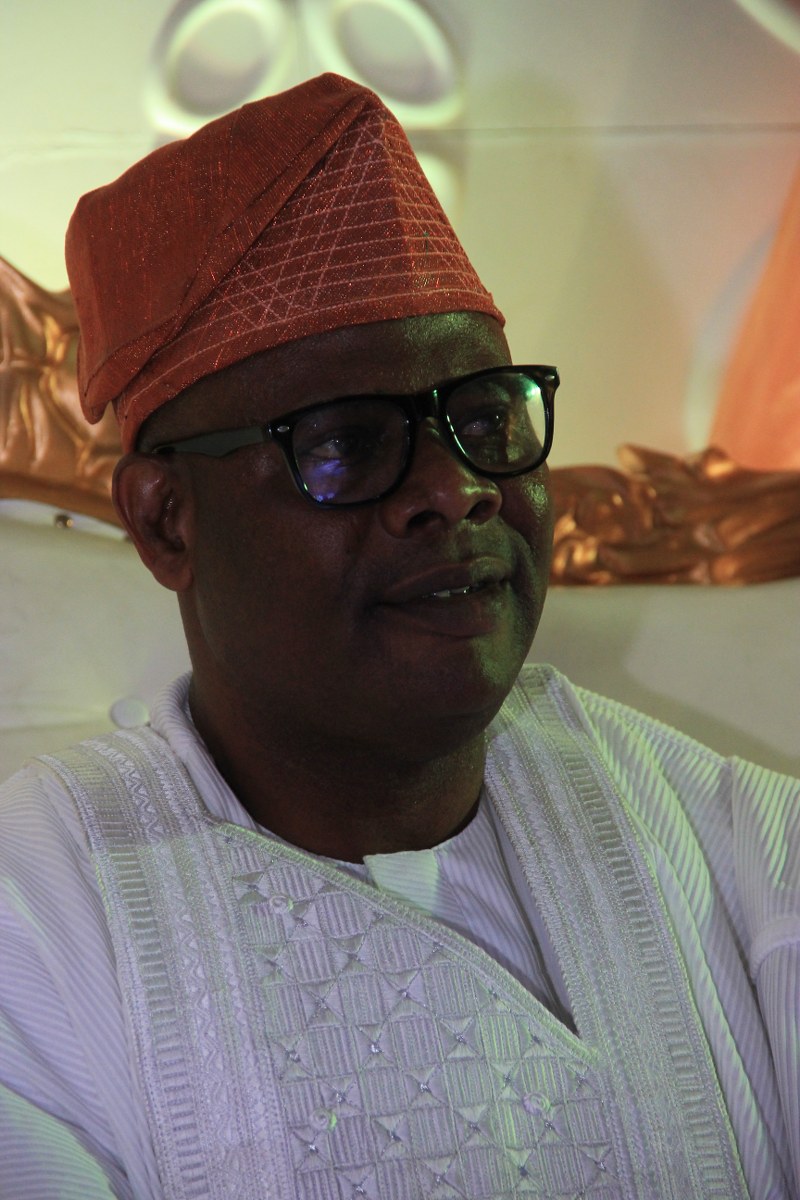 Movie Actor, Yinka Quadri, is one of the highly respected veterans in the movie industry. He has produced over 50 stars in the course of his career. That explains why his 60th birthday was star-studded. On the 6th of September, 2019, at the Anchor Event Center, Ikeja. The venue of the event was beautifully decorated in Black-white Orange colour. The event, which was witnessed by creme-de-la-creme of the society had 5 different Aso-Ebi on display.

Popular actor, Odunlade Adekola, started the event on a very cool tone, as he sent all the guests laughing, with rib-cracking jokes, before finally handing over the microphone to the MC of the occasion. Popular comedian, Gbenga Adeyinka, the 1st.

There were lots of side attractions at the 2-in-1 event, as Yinka Quadri clocked 60 years and also inaugurated his new school of performing art.

One of the side attractions at the event was the entry of the celebrator, which was beautifully done in company of his beautiful wife and colleagues in the industry.

The celebrator, Yinka Quadri, changed into two different outfits at the party. His wife also spotted his second outfit.

Popular Fuji musician, Kwam 1 de Ultimate, was on the bandstand. There was so much to eat and drink, as the committee asigned to take care of guests left no stone unturned to ensure that everything turned out well.

Special guests launched the school and the King of Fuji, Kwam 1, took over the stage for the party proper.

THE VENUE OF THE EVENT BEAUTIFULLY DECORATED

The venue of the event was well decorated in white, black and orange, which were the official colours of the day. Guests were treated to a fulfilling evening, with lots of well dressed ladies and handsome men in the hall.

The 60th birthday party and inauguration of Yinka Quadri School of Performing Art Ceremony was anchored by popular stand up comedian, Gbenga Adeyinka, the 1st. He surely swept everybody off his/her feet as he dished out  rib-cracking jokes at the different interludes at the event. He was also handsomely dressed in a well designed agbada.

Popular and highly respected actor, Odunlade Adekola, was among the first few stars who got to the event very early, and immediately he stepped into the hall, the guests started singing his praise, and even took turn just to take selfie with him.

One of Yinka Quadri’s son Kwam Quadri, performed a special song to celebrate his father at 60. The young guy thrilled guests with his special performance, and he left guests asking for more. Lots of his friends were also present at the event cheering his performance.

WITH LOVE FROM THE KOSOKOS

Kosokos are among popular and prominent families making waves in the industry. Prince Jide Kosoko and his two daughters, Shola and Bidemi were present to celebrate the movie icon, Yinka Quadri, they were all gorgeously dressed, while Bidemi stepped in with her baby boy.

The dark-skinned beautiful lady, Nike Quadri, who has been married to the movie icon, Yinka, for over 35 years was, indeed, the special host for the party. She changed into different outfits, at the party. Initially, she was beautifully dressed in one of the lace aso-ebi, and later changed into purple lace which her husband also spotted. She was up and doing throughout the period of  the party, taking care of guests, and also assisting the committee members made up of stars who had passed through Odunfa caucus. She was, indeed the Chief Host of the party.

KWAM 1 ON THE BANDSTAND

Highly celebrated King of Fuji, Kwam 1, the ultimate, was on the bandstand. He took over the party at the late hours, when every other performance had been done, and the main party proper started with his unique performance. He drove everybody to his/her feet, as they all danced to his special beats.

THE CELEBRATOR  TWICE CHANGES INTO OUTFITS

Yinka Quadri changed into two beautiful outfits at his party. He was initially dressed in a white agbada, and changed into purple lace agbada in the later part of the same party, he wore the same outfit with only his wife.

Movie icon, Yinka Quadri, who hardly dances, as most people say, had no choice but to dance on his special day. He danced into the hall, wearing a well designed embroidered agbada in company of his family  members and movie veterans, while other guests were also on their feet to honour him.

WITH HIS FAMILY MEMBERS AND

CLOSE FRIENDS IN THE INDUSTRY

The MC of the event, Gbenga Adeyinka, coordinated the cutting of the cake, which the celebrator did with his family members and close friends in the industry, such as Ogogo, Abbey Lanre, Dele Odule and others, and it was done so perfectly by calling Allahuwa Kabir.

THE INAUGURATION OF YINKA QUADRI SCHOOL

Besides celebrating his 60th birthday, Yinka Quadri also inaugurated his new school, Yinka Quadri School of Performing Art. According to him, inaugurating the new school is a way of giving back to the society for all the support, people have given to him. His close friends in the industry such as Taiwo Hassan (Ogogo) Abbey Lanre, Dele Odule Olaiya Igwe were all called up to the stage to inaugurate the new school.

Yinka Quadri wife, Nike’s friends made a special presentation to the veteran actor. They presented a special gifts to him to appreciate him on behalf of their friend, who is his wife. 