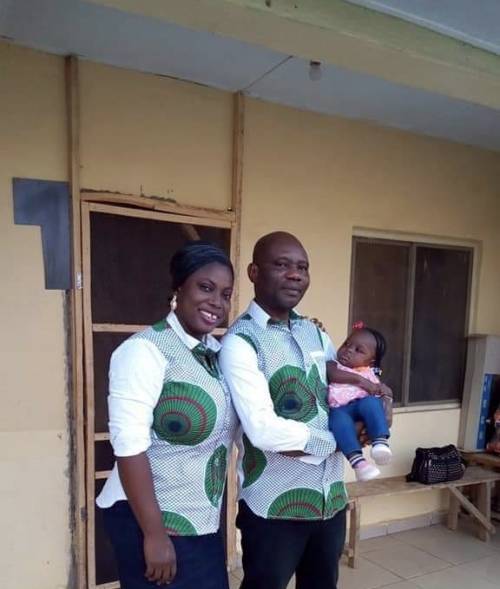 Francisca, the wife of slain journalist, Alex Ogbu, has told Newsmen that his tragic demise had filled their lives with darkness.

Speaking for the first time on Monday since her husband was allegedly felled by police bullets on January 21 in Abuja during a protest by members of the Islamic Movement in Nigeria, the mother of one, who has been heartbroken since that period, told our correspondent that she currently feels as if the entire world had crumbled on her as a result of the sad event.

While demanding justice and transparency in the unravelling of her husband’s killers, Francisca, who is a volunteer with N- Power, a Federal government Social Investment Programme, said the tragic incident had turned her into a widow at a young age.

Fighting back tears, she said, “There is no word to describe the pain we feel over the death of my husband.

“His tragic demise has brought darkness into our lives in every sense. Our two-year-old daughter has been crying and asking after her father.

“I don’t know how to comfort her because I also need someone to wake me up and tell me this is a dream.

“My husband was everything to us. I don’t know how I will cope with life and raising our daughter without him around.”

Calling on the police to fish out its personnel responsible for Ogbu’s death, Francisca told SaharaReporters that the authorities had not been very transparent about the entire incident and the process to conduct an autopsy on the deceased.

She added, “I want the police to come out and say the truth and let the world know that they killed my husband.

“They have so far been economical with the truth by trying to alter the narrative and claiming that my husband was an accident victim.

“The notice given to us to bring a pathologist for the autopsy investigation to be carried out at the National Hospital was short.

“All I want is justice for my late husband.”

Findings by SaharaReporters revealed that the results of the autopsy will be ready in two weeks.

Also, it was gathered that officers at Utako Police Station in charge of the matter had refused to release items retrieved from the deceased to the family, which include cash, mobile phones and ATM cards, claiming that investigation had not been concluded.

My Whole World Has Crumbled – Wife of Slain Journalist In Abuja Mourns was last modified: January 28th, 2020 by Damilare Salami

WHY I WALKED OUT OF MY MARRIAGE – OLOLADE ABUTA