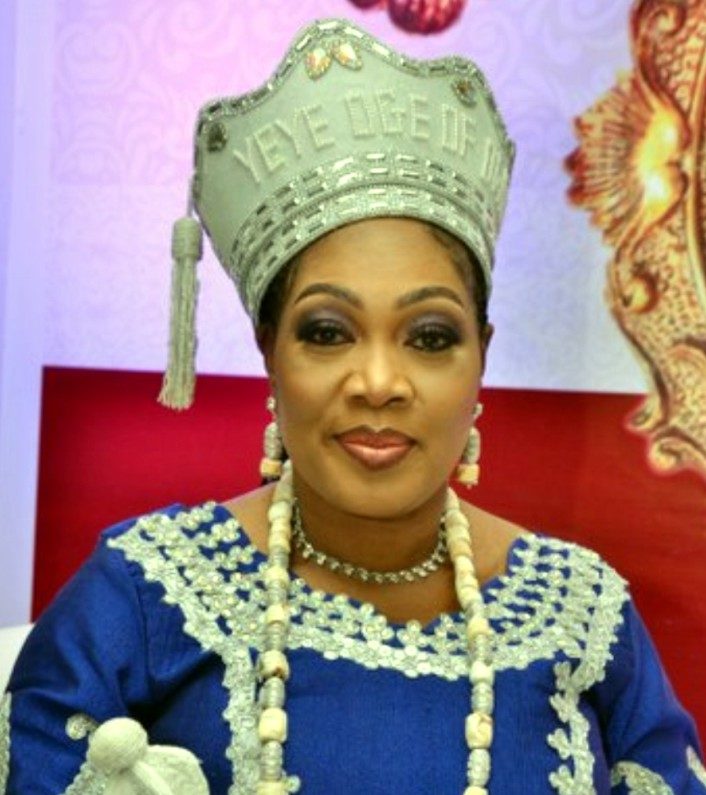 •Details Of Her Classy Party In ABEOKUTA

Sounds of drums and chants of cultural music greeted individuals on Friday, October first, 2021 as a mammoth crowd gathered at the Palace of the Olowu of Owu, HRH Oba Dr Olusanya Adegboyega to celebrate with his royal highness as he confers the title of Yeye Oge of Owu Kingdom on one of Naija’s most beautiful society women, Chief Mrs NanaFatima Martins.

It was a day to be forever remembered by the people of Owu because they were highly entertained. The celebrant herself was gorgeously dressed and looked so radiant. She also had the support of her husband, Apostle Rotimi Martins who stood by his beautiful wife from start to finish.

There was plenty food to eat and surplus drinks. The event also had all the positive vibes and energy any high profile owambe is expected to have. City People’s Brands Editor, DAMILARE SALAMI 08155134152 was present in Abeokuta alongside a Photojournalist, Sunday Oyemade and he this report, he brings you all that went down, enjoy.

Many would have thought that the crowd that landed at the Olowu’s palace on that Friday came to celebrate Nigeria’s Independence Day with Kabiyesi as different expensive cars came from different parts of the country to pay homage to his royal highness on October first. But it became clearer later it wasn’t just about the Independence Day celebration alone, Owu kingdom was adding a new member to its council of chief when all the materials needed for the traditional rites were brought out. And without any further delay, the purpose of the gathering was announced by Asipa of Owu kingdom who also moderated the event.

The presence of one man gave the event a completely new look. It was that of the former military and civilian president of Nigeria, Chief Olusegun Obasanjo, the Balogun of Owu Kingdom. Baba came in the company of his aides. His presence made a bold statement on the acceptability of the new chief. He also made it clear that honouring Chief Mrs Nanafatima with the title of Yeye Oge of Owu Kingdom was the right step and a forward-thinking approach of kabiyesi to advance the Owu Kingdom and Egbaland in general.

Describing Chief Mrs NanaFatima Martins as beautiful would truly be to cover up many things; she was simply a statuesque woman. Everyone knows that she’s tall and fair; the colour, design and shape of her outfits perfectly matched her beauty. She was adorned in a beautiful royal blue damask attire as she elegantly paraded herself like the queen that she truly is. Her husband, Apostle Rotimi Martins proudly and gallantly stood beside her as they were led by traditional dancers and drummers to where her coronation would be performed.

Many socialites and society women came through for one of their own. They stormed Abeokuta from different parts of the country, most especially Lagos, Abuja and overseas. The men looked super handsome. Most of them wore Agbada and the Aso-Ebi wine colour-striped caps. A further enquiry by City People revealed that most of them were members of the Island Club in Lagos. And the women too, they were all dressed in the special Aso-Ebi wine lace. They came in different shades, shapes and designs but one thing that cannot be taken away from them was the fact that they were classy.

There was one woman who was dimmed perfectly to perform the traditional coronation rites on the new Yeye Oge, it was no other than the Iyalode of Owu Kingdom, Chief Mrs. Gbemisola Adesida. She performed her duties without much ado. She also made the newest chief in town take her oath of office before the crowd was dispersed. Many of them headed for the reception while a select few were catered to in the palace.

All roads led to the DLK Event centre in Oke-Ilewo, Abeokuta, Ogun State. It was the most suitable venue for a party of such magnitude. It is one of the best event centres in Abeokuta. It is located along the MKO Abiola way and not far from the NNPC mega station. DLK event centre is quite easy to locate, with good parking space, fully air-conditioned, fenced for the purpose of security and very spacious. It was also beautifully decorated to match the class and taste of the celebrants and their guests.

Cool tunes from the turntable of DJ Large welcomed guests as they arrived one after the other from the palace, awaiting the celebrant’s grand entry. Spaces had been provided for each guest as each table was appropriately labelled. However, there is no owambe without good music. DJ Large was filling the gap before the live band took over. He goes by the name Amujo Oludare and his work spoke volumes about his expertise and professionalism at the event. He understood the mood and served each song to match the mood of the party.

Dressed in his customary agbada, buba and soro, handsome and culturally equipped broadcaster, compere and on-air-personality, Bashorun Gboyega Lawal mounted the podium with a lot of vigour and he gave so much life to the already enthralling event. He started his broadcasting career at the Nigerian Television Authority (NTA), Ibadan, and then it used to be called Western Nigeria Television (WNTV), as a freelance Yoruba presenter, as a poet in the year 1978. Along the line, he found himself becoming more known as an exponent in the chanting of ‘Ewi’ (Yoruba poem) under the amiable supervision of Prince Bayo Sanda who was then his Producer.

Chief Rotimi Martins and his wife, Chief Mrs NanaFatoma Rotimi Martins are not done yet. They reappeared in the reception hall in beautiful attire. This time, it was a monotone lilac lace and gele to match for Chief Mrs NanaFatima Martins while her husband was adorned in lilac dansiki and soro with a matching cap. They looked like a new couple that is just walking down the aisle.

Trust Queen Ayo Balogun to deliver when it mattered most; she came to the event with a full band and ready to groove and make the guests dance and she do just that. She serenaded the guests and celebrants so much that even the compere alluded to the fact that she is one of the best in her trade. Queen Ayo Balogun is an iconic juju singer and the first woman to become the president of the Association of Juju Musicians of Nigeria (AJUMN). She runs a 30-man band named Ayo Balogun and Harmonic Voices. They gave the guests maximum entertainment with pure and undiluted juju vibes that raised the roof of the DLK Event Center.

We did mention to you that the event was filled with classy society women. There were two of them that stood out and. They are Chief Mrs Adetutu Gbolade, the Iyalaje of Baltimore and her sister, Feyi Ibraheem. They were both early comers at the event and they stood by their friend, the new Yeye Oge of Owu kingdom. I’m not certain that you saw the Iyalaje of Baltimore on the dance floor but we did. Oh yea, she spent big, spraying her friend the celebrant and the other women in her circle. Iyalaje of Baltimore and Feyi Ibraheem were indeed the life of the party, there were other women City People caught on camera in their circle, they are Olaide Adebayo, Yemi Duro-Emanuel and many others.

Oba Saburee Babajide Isola Bakre is the Agura of Gbagura. He was one of the biggest guests that graced DLK Event Center for the new Yeye Oge of Owu Kingdom and her husband. Royalty was well respected by these chiefs as they placed Kabiyesi on a royal seat within the auditorium. He was positioned where everyone could have a glimpse of his royalty and he spent ample time to felicitate with his chief and his wife before he stepped out in style.

The Island Club is known to house captains of industries and top socialites but they also know how to have fun. They stormed Abeokuta in their numbers to celebrate with one of their own. When they mounted the dance floor, it became a different ball game entirely. Yes, they are heavy spenders, they sprayed cash and made huge statements. You will surely know when you have the Island club members at a party because they don’t dull.

The Island Club is one of the oldest multinational clubs in Nigeria. Established on Friday, October 29, 1943, in Lagos Island, the club began as a cosmopolitan club comprising members of different nationalities, races, religions and political orientations. Adeyemo Alakija was the first president. The Island Club started with 50 Nigerians and foreign gentlemen, one of whom included the British Governor-General of Nigeria, Sir Arthur Richards. In its early stages of development, the club included such members of the Lagosian elite as politicians, lawyers, captains of industry, soldiers and other professionals.

Engr Sunday Oyekanmi Gbenjo, the President, De ZENATE Club of Nigeria led his members down to Abeokuta, all for the Martins. They also made statements and spent big on the dance floor. They all appeared in white and tomato red caps.

Why LATEEF ADEDIMEJI Got The Lead Role...

MIDE MARTINS Opens Up On Her Rift...