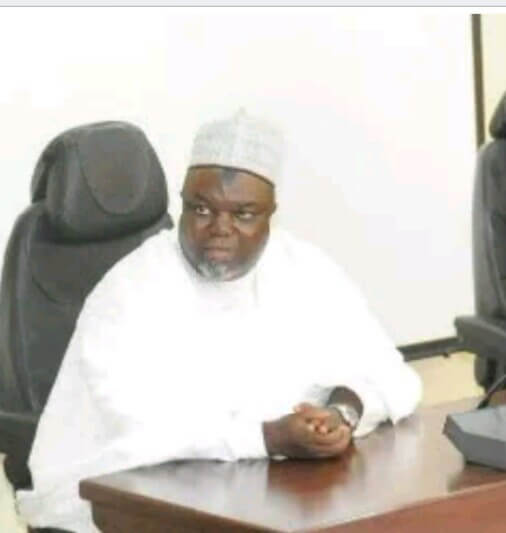 That Chief Missioner of a Popular Islamic Group in Nigeria, Alhaji Abdulai Akinbode, has resigned his position as the Missioner of Nasrul Lilah-Fathi, Nasfat, after 17 years is no longer news to some people, but what is new is that Alhaji Abdulai Akinbode has floated his own Islamic group. The missioner’s resignation, which took place sometimes in May this year, didn’t come as a surprise to top members of the association, who were privy to all the coded cold war which led to the exit of the popular Muslim cleric in May as a new Missioner  was immediately installed.

The former Chief Missioner of the Nasrul Lahi l Fatih Society (NASFAT), Abdullah Akinbode, who voluntarily stepped down, sited his new Asalatu group called  “Jamatulahli Lahi Islamic Society of Nigeria just a few metres away from his former Asalatu group, Nasfat’s head-quarters and this has sent many tongueS wagging on why he couldn’t get another location for his New Islamic group. The new Islamic group is located inside Alhaji Muri Gbadeyanka’s Mitv office, which is just adjacent to Nasfat’s.

In introducing the new Islamic group, Akinbode wrote in the group’s prayer book, “the organisation is an Islamic – branded religious outfit that stands to project the  ideals and realistic traits of the prophetic Methodism. Its synergy and syllogism depict robust interactions of the Ahlu – li – Llahi’s (Household of Allah)  concept whereby the Muhajirun (Migrants) and the Ansar (Helpers) cordially relate formidably as entities to elevate the cause of Allah.”

The coming on board of Jamaa’tu (Ahli Llahi further adds to the proliferation of religious bodies, which many believed are induced by materialistic quest rather than contributing to spirituality`.

The floating of Akinbode’sgroup has further divided the largest Asalatu group into 2 factions as some top members went with Abdulai Akinbode, while some decided to stay with  Nasfat.

City People’s Investigation revealed that the major cause of the missioner’s resignation had to do with how the Money generated from the Asalatu sessions had been shared.  The crux of the crack in NASFAT was the irreconcilable differences regarding who gets what and how much out of the weekly “asalatu collections (money).

The Statement  reads in part, “at a meeting held on 25th December, 2016 between organs of NASRULAHI-L-FATIH SOCIETY (NASFAT) and the former Chief Missioner (CM), Alhaji Abdullah Gbade Akinbode, he made the following declarations and added that only their fulfilment by the society would make him rescind his decision;

“The Board of Trustees, National Council of Elders, and National Executive Council as now constituted should be dissolved and merged into a body of Hawlur-Rassul (those who surround the Prophet in the course of Allah). “The zones of the Society should be dissolved immediately.  Both (i) and (ii) above should be merged and totally submit to the authority of the Chief Missioner.

“An Executive Secretary should be employed to head the Secretariat to manage the Headquarters and Zones directly as approved by the Chief Missionary. “1/5 (20%) of all collections at Asalatu sessions and other functions should be paid directly to the Chief Missioner, “.

All these were said not to have gone down well with many top excos of the Association, who felt the New Religious law which states that the Head of a church or mosque should not use more than 10 years in office should be applied  and when the agitation for a new missioner  started, Akinbode was forced to bow to pressure. According to NASFAT’s National Publicity Secretary, Banji Busari, Akinbode’s exit was voluntary and the society would follow due process in appointing another spiritual leader.

He told a national newspaper that: “His exit was contained in his letter of disengagement from the service of the society, which was sent to the society through the office of the general secretary. “Following the letter of acceptance by the society  the position of the Chief Missioner had become vacant with effect from April 28 2017.”

He added that the appointment was done in line with “Article 14.1.6 of the constitution of the society. While some believed that the hatchet should be buried since Alhaji Abdulai Akinbode has started his Own Islamic Group, those who were at the last Layila-Tu-Quadri of the Abdullai Akinbode’s, `Jamatul Ahli Lahi Islamic Group alleged that the Missioners was still bitter. According to an eye witness, it was alleged that Chief Abdulai felt cheated that after building the association to an enviable height, he was maltreated. He was alleged to have said many unprintable things about NASFAT and remarked that he didn’t mind if people took a voice recording of his outburst.

Akinbode became the Chief Missioner in the year 2000, following the death of the first Chief Missioner, Minihim Taiye Tijani. Akinbode spent years in the position. Nasrulai, Nasfat is one of the biggest and oldest Islamic Asalatu groups in Nigeria. Nasfat was founded on Sunday, March 5, 1995. The society named Nasrul-Lahi-il Fathi with the acronym NASFAT had its inaugural prayer session at the residence of its pioneer President, now Chairman, Board of Trustees, Alhaji Abdul-Lateef Wale Olasupo, before it was moved to its permanent site at the Alausa Central Mosque in Ikeja many years ago.

All You Need To Know About Fasting...