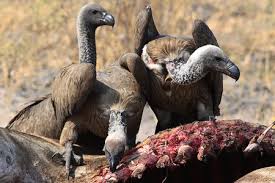 To prevent extinction of Vultures  in the Nigerian ecosystem, the Nigerian Conservation Foundation (NCF) has recently taken sensitization and awareness campaign to four Nigerian states of Sokoto, Taraba, Enugu and Oyo which are considered as Vulture Hotspots.

The campaign facilitated by EV New Life Project in Nigeria, took place between 4th to 6th September across the states as the commemoration of 2019 International Vulture Awareness Day (IVAD).
City People gathered that the campaign which kicked off in Sokoto on the 4th had on its first day, a seminar organised for 300 participants drawn from Department of Forestry and Wildlife, Sokoto State Ministry of Environment; Veterinary Department, Ministry of Agriculture;

Farmers and Sokoto State Association of Livestock Rearers (Miyetti Allah).
At the seminar, Mr. Abubakar Ringim, a lecturer in the Department of Biological Sciences, Federal University, Dutse, Jigawa State, delivered a lecture on Threat and Conservation/Protection of Egyptian/Other Species of Vultures in Nothern Nigeria in both English and Hausa languages.

Thereafter, Mr. Oladapo Soneye, representing NCF DG, delivered a speech on his behalf. Meanwhile, to drive the message of conservation home further, a Drama Troupe was engaged to stage a play in that regard to the gathering. And again, School Conservation Club was inaugurated in the Department of Forestry and Wildlife Management, Usman Danfodio University, Sokoto. And that ended the activities for Day 1.

On Day 2 in Sokoto, there was a market rally which took place within Sokoto Central Market (the largest local market in West Africa) with key participants being local natural resources users drawn from Association of Hunters, Traditional Medicine Practitionals, Wildlife Traders and Crop Farmers within Sokoto and its environs.

A mini lecture was delivered to them by Mr. Ringim in local language and  a play-let was presented by the Drama Troupe.
In Jalingo, the capital of Taraba State, the first day of the campaign was 5th September, and it started with stakeholders’ meeting which held in the palace of Emir Garba Chede, Alhaji Maigandi Kaigama.

Garba Chede is a community in Bali Local Government Area of Taraba State and the people of the community were sensitised on the importance and need to conserve Vultures in their locality. The meeting was also used to inform them about NCF’s intention to hold a rally the next day, requesting their full participation.

The traditional ruler, Emir of Gaba Chede in his welcome address commended the effort of NCF and pledged his support for vulture protection in the town.Also present at the meeting were Emirate Council, Chief slaughter (Sarki Pawa), District Head, representatives of the Fulani group, security agencies and youth group.

Day 2 was a community rally held on 6th September: The rally commenced at the palace of the Emir through the streets, down to the abattoir. At the abattoir, NCF’s representatives, Mr. Yushau Sallau and Ms. Doofan Nelly Joseph enlightened the people on the need to assist in conserving Vulture. The slaughter association revealed that the abattoir used to be a safe zone for Vultures in time pass but are now hostile zone because of the threats.

In the South East State of Enugu, the campaign was on the 6th of September with two major activities; Workshop & Roadshow. A Sensitisation Workshop was held at Fidelma Hotel, Enugu and participants were enlightened on the species of Vultures that can be found in Nigeria with a presentation of facts and figures about Vultures, status of vulture population in Nigeria, causes of their decline as well as the implications, with emphasis on the Egyptian Vulture.

The implication of the recent incident in Eke-Ihe Market causing the death of over 50 vultures due to poisoning was used to drive home the key message. Thereafter, question and answer session rounded up the workshop. There was Roadshow after the workshop and participants were led to the artisan market as Mr. Paddy Ezeala, Dr. Stanley Ilechukwu and Mrs. Abidemi Balogun delivered relevant talks.

The Ibadan, Oyo State edition was on 5th September and it started with a courtesy visit to Iyaloja in the ancient town. A visit to Iyalaje Eleweomo of Ibadan Land, Alhaja Asiri Amoo,(President of the Wildlife Traders in Ibadan- a major wildlife market hub) thereafter was to explain the subject matter better, remind the market elders about the planned sensitisation workshop and to rally support for the success of NCF’s activities within the market.

A sensitization exercise also took place the next day within Bode Wildlife Market, Ibadan where NCF had initially conducted a Vulture survey earlier in the year. The workshop was made to be very interactive as participants were made to be aware of the significant roles of Vulture in the ecosystem, decline and causes of decline in Vulture population and more importantly, consequences of their extinction. The interaction session was led by NCF Representatives, Mrs. Damola Ogutuga and Ms. Ibukun Lawal.

See What FG Did Next, After Buhari Won At Tribunal

APC crisis in Rivers gets messier, as Abe dares Amaechi