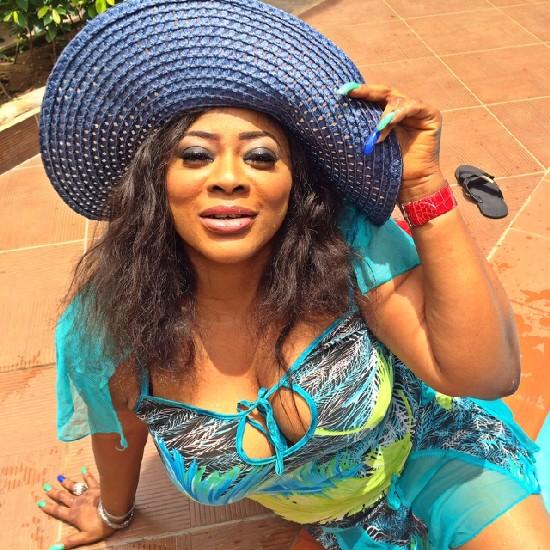 Reveals Why She Is Still Single @ Over 40

Ayo Adesanya is one of the movers and shakers of the industry. She is an actress-cum-producer, who has done so much for herself in the industry. She features in both Yoruba and English films. She hails from Ijagun movie, Ijebu in Ogun State. She attended St. Annes School in Ibadan, Oyo State and later proceeded to the University of Ibadan, where she obtained a degree in Communication. She began her career in 1996 after she completed the National Youth Service Scheme and her first appearance on television was on Tunji Bamishigbin’s soap opera entitled:Palace. She later joined the Yoruba-language film industry, where she has featured in and produced several movies.  Years, back, Ayo was romantically linked to Goriola Hassan, a fellow Nollywood actor and the union was blessed with an adorable boy. Many thought they were married, but they were not. She only moved in with him. Recently, City People GBOLAHAN ADETAYO met with the delectable actress where she revealed why she is still single at over 40. She also spoke about her new project among other interesting issues. Excerpts:

Nothing much, but I am sure you are aware that one of the movies I featured in came out recently, it was entitled Omuguo, produced by Kunle Afolayan and it is running  in the cinemas. I have my own project coming up soon. I am partnering with some people and some organisations. It is a reality show anyway.

You have been talking about this project for the past 3 years; can you throw more light on it?

Gbolahan, it took me 5 years to put it together, but I started talking about it 3 years ago. It is not a project that I can handle all by myself, I need to partner with some people. I eventually got a partner and you are going to be seeing it on screen soon. The show is an everyday thing that we do at our various homes on a daily basis. I don’t like talking about what I want to do on pages of newspaper.  People should just watch out for it. It is like a comedy show, you laugh, learn and relate with it.

Can we meet the partners?

I am partnering with a company, which dwells more in advertising, documentary and TV productions. I don’t want to reveal its name for now.

You are now featuring more on TV series recently, what is the reason?

I only did one casino; I am still the same Ayo in the Yoruba  movie industry, just that I now feature more in English-speaking part of Nollywood. I think I am just blessed because I can speak all the languages in Nigeria. I can do a Hausa’s movie if I get invitation. I will go through the script and interpret it.

I understand your career started with the English genre before you came to Yoruba movie industry, what inspired you to go back to English movie industry?

It is not about you going back to the English movies; it is about the producers seeing something unique in you and invite you to interpret a role for them and you will gladly be part of it if you like it.

Looking at the 2 genres, which one do you enjoy the better?

The two genres give me joy. I enjoy working with either Yoruba or English speaking  actors. I know I am a Yoruba girl, but the thing is that I can’t differentiate between the two, I am a Nigerian and I work to satisfy myself. I deal with the two genres accordingly. I don’t have any favourate really, I mingle with everyone.

What distinguishes the two genres?

Both genre still have much work to do because we are all Nigerians. But I will tell you because I have been facing camera lenses for a very long time; we have gone a long way as Nigerian filmmakers. In the last few months, I have participated in some projects that I know that there is an improvement in Nollywood project. Though, some of them are not out yet but I know they are improved projects from Nollywood. I am talking about Casino, Omuguo and others that are not out yet.

You seem to be the queen of a sub-lead actress in the industry together with Jaye Kuti, what do you have to say about that?

The industry is very easy and the producer knows better the role you fit in. We are like 10 persons playing the sub-lead roles right now, but people have preferences.  When you have a movie script, the producer or director knows who can interpret a role better and you have to look for the person. So, I will just say glory to God Almighty that I belong to this class of people, given the sub-lead to interpret. But away from sub-lead, I have featured in many of movies that I played the lead myself and they were quite interesting. I am starting a job tomorrow that I am playing the lead character. Both lead and sub-lead, I give the glory to God that I am still relevant in the industry.

Can you share with us the greatest mistake you have ever made in life?

The greatest mistake for me in life is a lesson, so I don’t think I have made any. Anything that has happened to me that you see in a negative way is an experience, it is something that I have experienced as a human and going through it is what  has made me who I am today. They are part of what to make me a human in life. So, I don’t call it mistake.

I don’t know! I really don’t know because I don’t enroach, but we are humans and we still make mistakes. If there is anything written about me in the media and it is a mistake, I will just laugh about it because it was part of our job. You can get away with the noise and once they blow it, people will be talking about it and it means you are still relevant.

Recently, a blog unveiled the list of Nollywood actresses, who are above 40 and still single and your name was included…..

Yea! I didn’t see it at all. I am yet to be married but I have a son. I have tried it before even though it was not legal, but I got a child for the person, it was more like I was married to him because we lived together.

Saying my name was included in the list is not a big deal to me. I have tried it and it didn’t work out for me. The people who compiled that list made a big mistake because I was like a married person then. What is the big deal about this marriage thing?  If you find love, find true love and you go on with it, if it is not true love, you stay on your lane and take care of the people you are meant to take care of, why are we making a mountain out of a mole hill? Do you think everybody will be married? It is not everybody that will get married, and that is the truth we are all running away from.

Should we conclude that you are still single because you are yet to find a true love?

Why are you sure that I am single? Do you know who I am dating?

That is why I am asking you, can you tell me who you are dating now?

Gbolahan, I hate you {Laughs….}because you don’t know who I am dating doesn’t mean that I am single.

Who are you dating now?

Oh, you actually think I will tell you that one now, so that you can spread it on social media?   I will respect that person, but I won’t tell you. The truth of the matter is that I have someone in my life and I am proud of him.

Do we see you going to the altar soon?

Bro, there you go again? Well, I will leave that to God. HIS time is the best. I am human, tomorrow God may say this is not the right person for me, that another person is coming in to take that position, I am ready. And if tomorrow God says this is the husband you will marry, I leave everything to God and I pray about it every day. I know God is at my back.

But do you see this present relationship you are into leading to marriage?

Gbolahan, leave me! You cannot know it all about my personal life, so I am not telling you. If it leads to marriage, you have to wait and find out that yourself, so wait till that time comes.