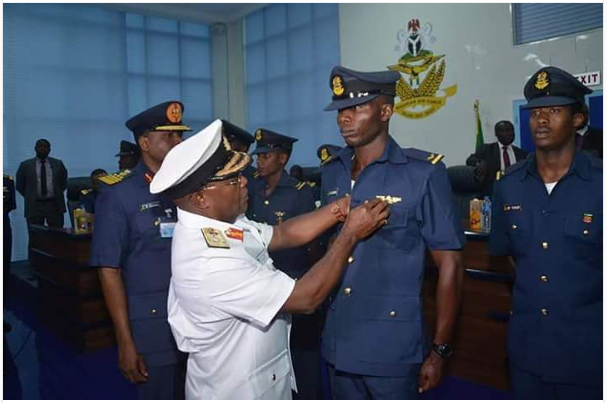 As part of efforts to enhance its operational readiness, the Nigerian Air Force (NAF) on Tuesday inducted a new set of 10 young pilots, who recently completed their flying training course at Westline Aviation, South Africa.
In his remarks at the winging ceremony organized for the new pilots, the Chief of the Air Staff (CAS), Air Marshal Sadique Abubakar, urged them to get ready for the operational flying environment, noting that the task ahead was enormous.
He also seized the opportunity to appreciate the Federal Government for the tremendous support being given to the NAF, without which its capacity building efforts would not have been possible.

The Chief of Naval Staff (CNS) Vice Admiral Ibok Ibas, who was the Special Guest of Honour at the ceremony, equally advised the young pilots to get ready to add value to the invaluable contributions being made by the NAF to national security.
According to him, the feats attained by the Nigerian military in the counterinsurgency operations had been made more promising with the “indispensable and ubiquitous air support” of the NAF.
Speaking also on the sustained security efforts in Nigeria’s maritime environment, the CNS disclosed that the Navy and the NAF were working closely with other security agencies to protect the nation’s wealth.
He described the NAF air operations in the maritime domain as great “enablers” in the fight against piracy, crude oil theft and illegal oil bunkering.
The CNS then extolled the current NAF leadership’s drive towards human capacity building.

The Chief Executive Officer of Westline Aviation, Mr Charlie Marais, who flew in from South Africa to witness the ceremony, was full of praises for the young Nigerian pilots, whom he said performed excellently during the flying training.
He further disclosed that he was particularly impressed with the commendably high level of military discipline displayed by the young NAF officers while in South Africa.
He added that it was a reflection of the high standards in the Nigerian military.