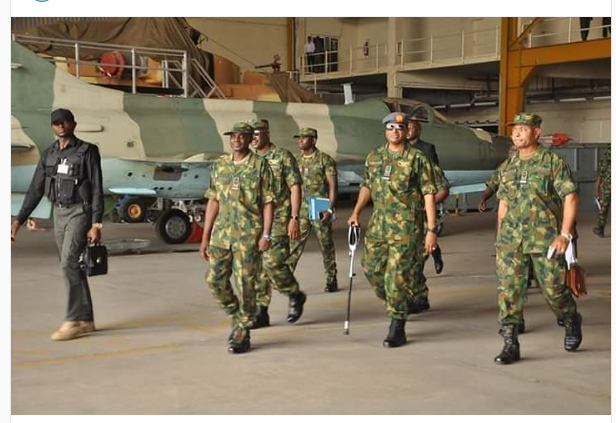 The Nigerian Air Force on Thursday said it has destroyed Boko Haram Terrorists logistic base and structures in Kusuma, in Northern Borno just as the Federal Government and the South African Government stepped up efforts on the development and acquisition of Unmanned Aerial Vehicles (UAV) and other military equipment to fight terrorism.

According to a communique signed by the Federal Government and the South African Government at the end of the 4th Nigeria-South Africa Defence Committee Meeeting at the CBN International Training Institute, Abuja, the Defence Industries of the two countries have been mandated to work together to produce military hardwares that would give more bite to the on-going counter-insurgency campaigns.

The Permanent Secretary, Federal Ministry of Defence, Mrs Nuratu Batagarawa signed the document on behalf of Nigeria, while Dr Sam Gulube , the Secretary of Defence South Africa also signed on behalf his country.

“On the development and acquisition of UAVs and UAV Jammers for counter-terrorism and counter-insurgency in the meeting agreed to expedite action on the signing of the MOU between DICON and DENEL to facilitate procurement and development of UAV technology,” the communique stated.

It added that the meeting focussed on research and development, specialized military training, capacity building in space technology/ and counter-terrorism and as a way of strengthening existing bilateral relationships between the two countries.

However, in a statement signed on Thursday by the spokesman of the Air Force, Air Commodore Ibikunle Daramola, the NAF said it conducted air interdiction against the terrorists’s facilities using 2 Alpha jet aircraft.

“On Day 3 of the Operation, the Air Task Force (ATF) of Operation LAFIYA DOLE, destroyed a BHT Logistics Base at Kusuma in Northern Borno. The air strikes were conducted on the heels of credible intelligence reports indicating that the BHTs had resumed using the previously abandoned settlement and established a Logistics Base to support their operations in the fringes of Lake Chad.

“Extensive Intelligence Surveillance and Reconnaissance (ISR) missions later identified 2 compounds within the village that were the main logistics hubs in the town. Consequently, the ATF dispatched 2 Alpha Jet aircraft to attack the settlement, recording direct hits on the target buildings and facilities with huge balls of fires seen.

“The NAF, working in concert with surface forces, will sustain the tempo of operations with a view to destroying all remnants of the terrorists in Borno State”.

READ ALSO: FRSC SAYS IMPOUNDED VEHICLES WILL NOT BE RELEASED TILL JANUARY

FRSC Says Impounded Vehicles Will Not Be Released Till January

It Is Time To “Restore All Focus On Football” – Leicester City Boss, Claude Puel