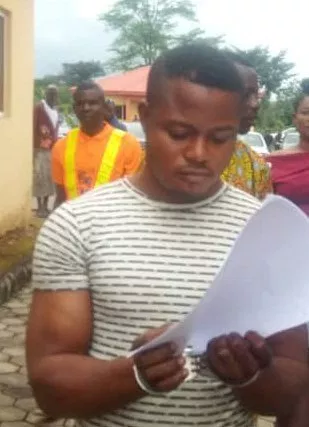 A soldier who allegedly raped a 300-level student of the Adekunle Ajasin University, Akungba Akoko, was on Wednesday arraigned before an Akure Magistrate Court in Ondo State.

Sources in the Nigerian Army revealed that he had been dismissed before his arraignment.

Sunday Awolola, an Army Lance Corporal, was alleged to have raped the female student on July 31 at a military checkpoint along Akungba-Ikare road.

He was arrested by the Army authorities in Akure, Ondo State, following an outcry against his action by the Ondo State government and the management of the university, even though there was an initial reluctance by the authorities.

Although it was initially thought to be a gang rape by the men at the checkpoint, further investigations by the respective security agencies revealed that Mr Awolola was on a solo adventure in assaulting the student.

The 33-year-old soldier was brought into the court premises by the police officers at 9:30 a.m on Wednesday.

His offence is said to be contrary to section 357 and punishable under section 358 of the criminal code cap 37 vol. Laws of the Ondo state of Nigeria.

The defence counsel, Kayode Idowu, asked the court to adjourn the case to enable him to properly study the applications brought before the court by the prosecutor.

The arraignment did not come without pressures from high governmental quarters as the matter immediately elicited anger from the Ondo State Government.

The governor, Rotimi Akeredolu, called for thorough investigations and demanded that the soldiers involved should be handed over to the police for prosecution.

His wife, Betty Akeredolu, also summoned a million man march against the action of the soldiers, although it was called off after she got the assurances of the military authorities that justice would be done.

The suspect had been dismissed from the Army before his arraignment on Wednesday.

HELP! We Only Enjoy Power Supply When Buhari Is In Daura – Leaders Cry out