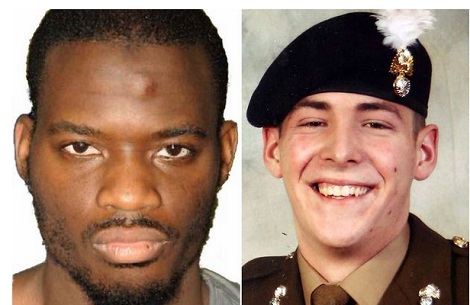 One of the murderers of Fusilier Lee Rigby is now regarded as the most dangerous prisoner in the British penal system.

Muslim extremist Michael Adebolajo, 31, has been described by prison officer as “violent, unpredictable and a major danger to other prisoners”. But the real threat he poses is his ability to radicalise other inmates, prison sources have revealed.

Dozens of prisoners have said to have fallen for Adebolajo’s twisted version of Islam and have vowed to become Jihadis when they are eventually freed.

Even non-Muslim prisoners are said to have converted to Islam and sworn an allegiance to Islamic State after being radicalised by the killer.

One prison official said: “Adebolajo spends most of his waking hours preaching his distorted form of Islam to anyone who will listen. He sees every inmate as a potential Islamic State soldier whether they are Muslims or not.

“He has a big personality and is very charismatic and some of the more vulnerable prisoners will fall under his spell. He is a very dangerous individual.”

The source said that Adebolajo now sees his role in life to recruit as many Jihadis as possible for the remainder of his life.

It is understood that Adebolajo has been given “special category” status because of the danger he represents.

The two terrorists mowed him down in a car before hacking him with knives and a cleaver.

The men dragged Rigby’s body into the road and remained at the scene until police arrived.

Both men received life sentences. Adebolajo was given a whole life order excluding the possibility of parole, and Adebowale, was given a minimum term of 45 years in prison