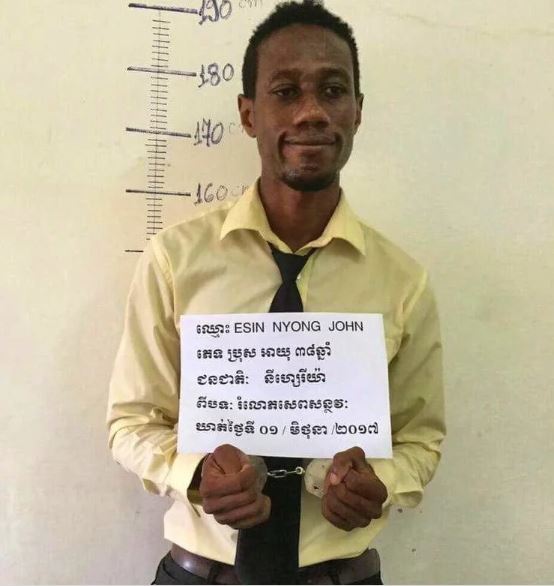 A Nigerian man has landed in serious trouble after luring an Indonesian woman to his room before raping her in Cambodia.

An Indonesian tourist has told police she was r*ped by a Nigerian who befriended her in Siem Reap province. The provincial police chief of staff Chea Samoeun said the girl was on a bus trip from Vietnam to Cambodia.
The man, identified by local media as Esin Nyong John, 38, arranged to meet her at a bus station. He promised to bring her to a guesthouse and to show her around the temples after lying to her that he was a Cambodian national.
Instead of taking her to the guesthouse, he brought her to the room he rented and r*ped her there overnight, Mr. Samoeun said. He said the girl did not shout for help because the man threatened to harm her if she did not submit.
After the assault, the man fled and left the girl locked in the room.
Pov Chendareth, an officer at serious crime office, said police were still questioning the victim.
Nigerian Man Arrested in Cambodia for Raping Indonesian Woman was last modified: June 6th, 2017 by Arinze Ago

DAMMY KRANE REARRESTED, TO FACE MORE CHARGES AND REMAIN IN PRISON TILL JUNE 25