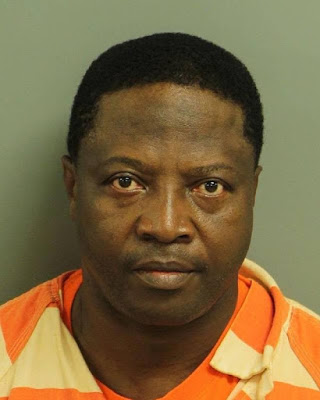 Nigerian man, 53, who worked at a group home in Raleigh, North Carolina, was arrested IN April after he allegedly raped a 47-year-old woman who lives there.

Police accused Nnamdi Godson Nwankwo of Rolesville of second-degree forcible rape and sexual activity by a substitute parent. Both charges are felonies. Records show that police arrested Nwankwo on Merrell Drive in Raleigh at about 10 a.m. on April 5th. Police said the incident happened a day earlier.

Nigerian man nabbed for allegedly raping 47-year-old woman in the US was last modified: May 5th, 2017 by Reporter

‘Why I Didn’t Kidnap In Yoruba States...

North Carolina-53-year-old Nigerian man Nnamdi Godson Nwankwo who
worked at a group home in Raleigh was arrested last month after he
allegedly raped a 47-year-old woman who lives in the group home.

According to Raleigh Police,Nnamdi has been accused of second-degree
forcible rape and sexual activity by a substitute parent. Both charges
are felonies.

Nwankwo was arrested about 10 a.m. Tuesday in the 200 block of Merrell Drive, a dead-end residential street in east Raleigh .

Nnamd Police arrest record ID is 41098571, However, Police did not identify the home where the woman lives.

I hope this communication finds you in the best of health and spirits. I
want to bring the following devastating case to the attention of the
Huffington Post.

My
son currently resides in a group home that is owned and operated by the
wife of the man who is accused of raping a mentally challenged woman in
a group home. I AM IN FEAR AND PRAY THAT THE MAN ACCUSED HAS NOT HAD
ANY SEXUAL CONTACT WITH MY SON AND HAS THREATENED HIM NOT TO SAY
ANYTHING. MY SON HATES TO SEE ANYONE GET INTO TROUBLE. Ff you have a
moment I hope that you will read what landed my son in the home in the
first place. It can also be read by going to Public Records File
15CVD9292. It appears that the same Wake County Judge that granted me a
Motion for Preliminary Injunction is the same Judge that resided over
the first hearing of the man accused of raping the mentally challenged
woman. News sources state that the man accused of the raping had custody
of the woman and was her substitute parent. How deceitful and
derogatory. My son and I always thought that this man who drove my son
around on many occasions was a nice man, but we now know that he was
not.

My son was excluded from housing because he has a mental
disability. in violation of the Fair Housing Amendment Act of 1988 and
other laws.The disability is what made him eligible for the housing in
the first place. I
was then stripped of my Guardianship because I had no place for him to
live. In a 6 months court case I was granted my motion for PRELIMINARY
INJUNCTION, PENDING TRIAL AFTER WAKE COUNTY HUMAN SERVICES (“WCHS”) LOST
THEIR MOTION TO DISMISS. A Wake County Judge found that I “Clearly”
established a PRIMA FACIE case. The Assistant Housing Director for Wake
County wanted me to sign into a new program after the son was excluded
from housing, but would not allow me to see the rules to the new program
before signing. I gave up the housing voucher because if I would have
remained there, I would have been in the same program that I was not
allowed to see the rules to, so I did not sign. I am now homeless. My
son is in a group home with constant visits from DHHS. The facility
received an A1 SERIOUS NEGLECT CHARGE FOR FAILING TO ENSURE THAT ALL 6
MEN WERE PROTECTED FROM BED BUG INFESTATION. My photos will show my
son’s face of bites which are discoloring his face. The husband of the
Owner and Operator of the home was recently found to have raped one of
the female clients at one of the group homes that she operates. In the
news, he has received a second degree felony for raping this person by
force who is mentally challenged and cannot consent to sex. There are a
great amount of things that are and have been wrong with the facility
that my son is in. I ma in the process of trying to get my Guardianship
back as I do not trust these Nigerian people. The Owner and Operator of
the facility has proven to be one who constantly tells falsehoods.
Please contact me for much more in details. They gave me a Guardian Ad
Litem “Just” to get the case settled against my will, as WCHS proposed
to me to settle the case without compensatory damage offer which is what
the lawsuit was drawn in a prayer of relief for and when I refused they
tried to make it look like I was legally incompetent. I AM NOT AND HAVE
NEVER BEEN ADJUDICATED AS BEING INCOMPETENT, INCAPACITATED OR UNABLE TO
HANDLE MY WON AFFAIRS. My son and I have been suffering with the
damages of HOUSING DISCRIMINATION IN VIOLATION OF THE FHAA OF 1988 AND
OTHER LAWS SINCE NOVEMBER OF 2014. I am looking for supporters of our
cause and anyone who chooses to help my son and in anyway, please
contact me at denise.fitzpatrick@aol.com It will be greatly appreciated. Thank you for your consideration at reading this devastating case.