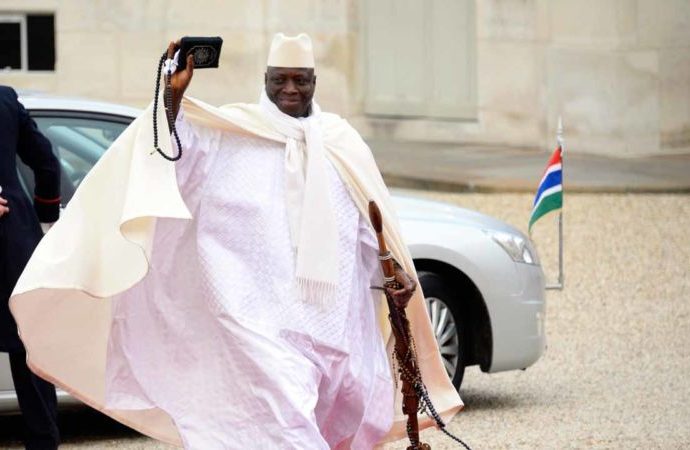 Nigeria soldiers will, on Wednesday (today), arrive at a base of the Economic Community of West African States troops in Senegal to ensure that President Yahya Jammeh of the Gambia steps down on Thursday, January 19.

Nigerian warship, NNS UNITY, is also heading for the coast of The Gambia to join the operation.

Punch reports that the troops would be briefed by the Chief of Air Staff, Air Marshal Sadique Abubakar, in the early hours of Wednesday, before leaving for Senegal.

It was gathered that apart from the NAF and the Nigerian Navy, the Nigerian Army would also contribute troops, although the number of deployment could not yet be ascertained as of the time of filing this report.

The source said some of the NAF fighter jets were expected to airlift the troops.

He said, “I can confirm to you that men of the Air Force will leave for Senegal tomorrow (Wednesday). They will be briefed by the Chief of Air Staff, Air Marshal Sadique Abubakar, at the Kainji base in Niger State.

“That Nigeria is deploying troops is now a certainty after several meetings with The Gambian president yielded no result. The Chiefs of Defence Staff of ECOWAS countries came to Abuja on Saturday, where they discussed what components each member state is expected to contribute to the troops that will force Yahya Jammeh out.

“The troops are expected to stay for two weeks and they will be received at a base in Senegal.”

Another military source added, “The NNS Unity is currently sailing off the coast of Ghana, after leaving from Lagos. It is not only Nigeria. Senegal is the host country for the troops, as it would be easy to launch an attack from there.”

The Defence Headquarters, Abuja, however, said it could not confirm the deployments, adding that it was a matter being coordinated by political leaders.

The Director, Defence Information, Brig. Gen. Rabe Abubakar, said, “We should not drag the Nigerian military into a political issue. What is happening is a political discussion between the ECOWAS leaders, aimed at solving a political impasse in one of its member states.

“Whatever they agreed to do is what will happen. Therefore, the military is not for any engagement regarding Jammeh or any other person for that matter.”

Adama Barrow of the opposition party won the December 1, 2016, presidential election but Jammeh, who initially conceded defeat by congratulating Barrow, made a U-turn a week later, saying he would challenge the results.

Despite interventions by the African Union and ECOWAS, Jammeh insisted he would not hand over power to Barrow.

This stance informed the decision of the leaders to withdraw their recognition for Jammeh as the Gambian president after Thursday.

Meanwhile, Jammeh, on Tuesday, declared a 90-day state of emergency 24 hours to the end of his tenure.

He warned security forces against violating the order or engaging in acts likely to cause a breach of the peace, and denounced “foreign interference in The Gambia’s election.”

The declaration of a state of emergency by the embattled President followed a rejection of his injunction to stop Barrow’s inauguration by the Gambian Chief Justice, Emmanuel Fagbenle, on Monday.

In a televised announcement on Tuesday, Jammeh said, “Any acts of disobedience to the laws of the Gambia, incitement of violence and acts intended to disturb public order and peace are banned under the state of emergency.”

Barrow is currently in Senegal and due to security fears, he was unable to attend the funeral of his eight-year-old son, who died on Monday after a dog bite.