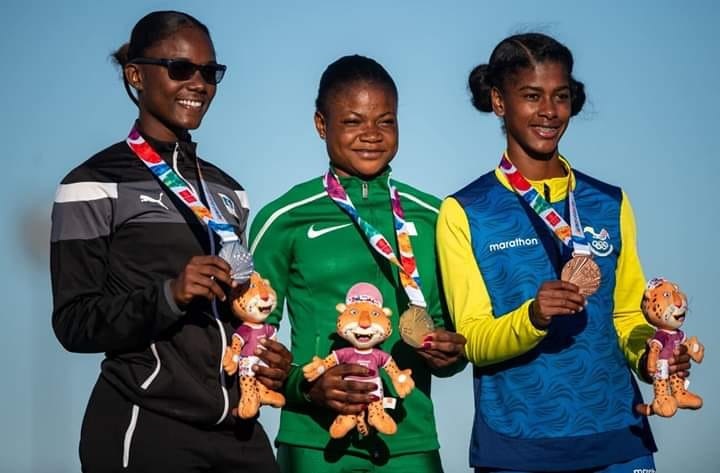 Nigeria has finally registered her presence at the ongoing 2018 Youth Olympics in Buenos Aires, Argentina and they did it style; winning gold in the 100m Women’s event through Track Princess, Rose Chukwuma.

Chukwuma won the final race with an impressive time of 11.17 seconds.

The 2018 Commonwealth Games Bronze medallist in the 4x100m had before now had a Personal Best of 11.55 seconds.

She was Nigeria’s youngest athlete at the Commonwealth Games and anchored the 4x100m relay.

The 2017 National U-18 sprint champion told the media in Buenos Aires that she is satisfied with her performance.

“I am happy and satisfied because before coming to Argentina I did not have good results,” Chukwuma said.

“I was scared that I would not get what I hoped for at these Games. I did not think that it was possible, but God sees to everything. I started to train in 2016 and I traveled to Australia last year to prepare in this discipline, then continued training in Nigeria.”

Chukwuma was part of the country’s 4×100 women’s team that won gold at the African Senior Athletics Championship in Asaba this year.

Alaba Akintola has also given Nigerian a silver medal after he ran a time of 10.24secs to finish second in 100m men’s event at the Youth Olympic Games.

Nigeria still has the hope for more medal as Ineh Oritsemeyiwa will be competing in the men’s triple jump on day 6 of the competition.