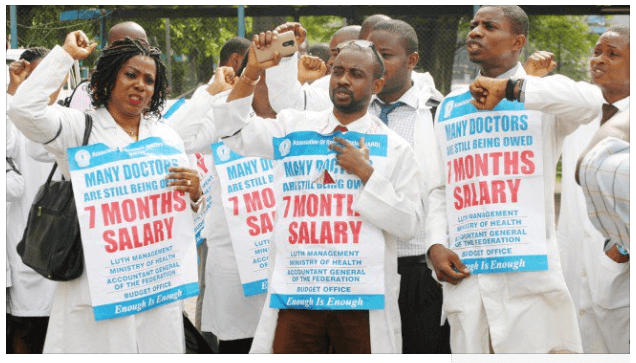 The National Association of Resident Doctors (NARD) have called off the bluff of the federal government who had threatened to invoke the ‘no work no pay rule’ rule if the union continues with its strike.

The NARD president, Aliyu Sokomba, described the government’s threat as “empty and the biggest joke of the century”, adding that the doctors are not intimidated and will go on with the strike until their demands are met.

The government threatened to invoke the rule on Tuesday, a day after the NARD, the association of certified doctors undergoing residency to become consultants, began an indefinite strike over the failure of the government to meet their demands.

The doctors said they downed tools over unpaid salaries, non-payment of hazard allowance, and a dearth of Personal Protective Equipment (PPE) in hospitals, among several other reasons.

Shortly after a meeting between officials of the NARD and that of the government ended in disagreement on Tuesday, the health minister, Osagie Ehanire, directed all medical directors in all public hospitals across the country to open a register by 7 a.m. from Wednesday and record ‘‘those who come to work and those who fail to come to work’’.

In a circular issued to all heads of clinical departments and resident doctors on Wednesday, the management of the Lagos State Teaching Hospital said it will apply appropriately, the ‘no work, no pay rule’ of the federal government.

Responding to the threat, Mr Sokomba told PREMIUM TIMES in a phone interview Wednesday night that they (union) were expecting such a response from the government.

“Instead of them to address our demands, they are resorting to cheap blackmail that they will implement no work no pay and sack doctors, is that not the joke of the century from a government that is not truthful? We are not moved,” he said.

He said the new hazard allowances are being paid to all categories of frontline health workers involved in COVID-19 treatment in batches.

But on Wednesday, the NARD president described Mr Ngige’s claims as ‘lies’.

In a letter to the health minister on Tuesday, JOHEHU, the association of other health workers apart from medical doctors and dentists, urged the government to pay the hazard allowances as agreed among other demands.

The NARD president gave a summary of their recent engagement with the government.

“We issued a 14 days’ ultimatum to the government which expired about 18 days ago. Our demands include provision of PPE, procurement of life insurance and payment of COVID19 hazard allowance, nonpayment, and slashing of doctors’ salaries in some states among others.

“None of these has been addressed. If you asked them today, they will say they have paid hazard allowance to insurance companies and all. If they have paid, then it is ghosts they are paying because no doctor in Nigeria or even any health worker has received any such allowance.

“It is this same type of government that will tell you they’ve procured life insurance for doctors but have not done anything.

“They have only been consistent in lying and deceiving. They are saying we should trust them and call off the strike but it doesn’t work that way. If you want to be trusted then stick to your words,” the medical doctor explained.

“They want to sack 16,000 doctors and replace them with what? Maybe Chinese doctors. But I must say that even China does not have 16,000 doctors to ‘donate’ to Nigeria.

“We are not moved by an inch by their empty treat. The strike is on course until our demands are met. In fact, since the government felt that this is the way they will respond, we are considering withdrawing the doctors we exempted (allowed) to attend to COVID19 patients to show them their threats mean nothing to us.”

No GoinG Back On Strike – Doctors Dare FG was last modified: June 18th, 2020 by Damilare Salami