No rally would be allowed any more in the state – Police 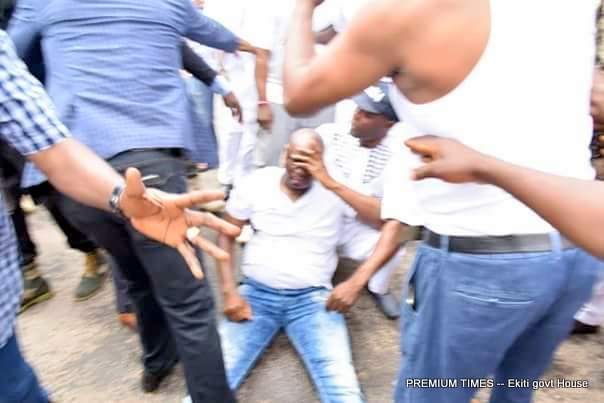 The Deputy Inspector General of Police, Operations, Habilal Joshak, has explained the role of his officers in the harassment of the state governor, Ayo Fayose, on Wednesday.

Mr Fayose was teargassed and harassed by armed police officers who had blocked the entrance to the government house and prevented a rally of the Peoples Democratic Party from holding, witnesses say.

It was gathered that Mr Fayose and his supporters were making their way to the venue of the rally by the entrance of the government house when they were stopped by the security men.

The ensuing argument resulted to shooting of tear gas causing the governor to suffocate.

His supporters were also forcefully dispersed, just as some were arrested.

But Mr Joshak said no rally would be allowed any more in the state unless expressly approved by the police.

He denied blocking the entrance o the governor’s office, saying only the road from Fajuyi to the state secretariat was blocked.

“But we are not going to allow any unauthorised rally that can trigger violence in the state. You can see that the state is tensed up.

“As law enforcement agent, we must be proactive and take actions that can prevent crisis rather than trying to quell it after it might have broken out.”

No rally would be allowed any more in the state – Police was last modified: July 11th, 2018 by Reporter