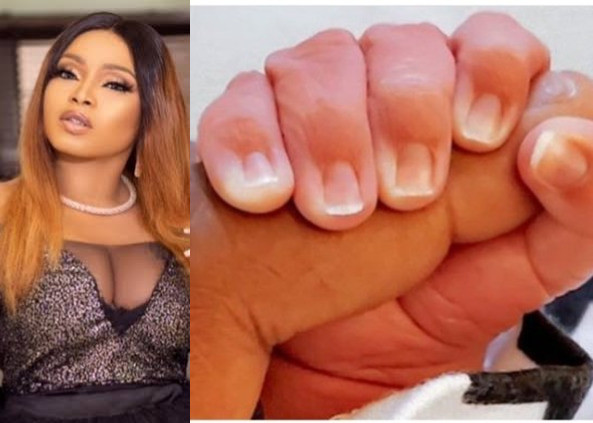 Popular Nigerian actress, Halima Abubakar, has deleted a photo she earlier shared on her social media page to announce the arrival of her baby amid claims that she stole the picture.

TheCable Lifestyle had earlier reported how the actress posted the photo of a mother holding on to her child on Instagram, accompanied by a terse post to tell fans she had welcomed a baby boy.

But shortly after, an American woman had called the actress out on the social media platform for “stealing her baby’s photo.”

The woman, identified simply as Ariel, subsequently demanded that Halima takes down the picture.

She also shared a screenshot of her private conversation with the actress where she questioned why the film star used her baby’s picture.

In the screenshot, the movie star appeared to have apologized, noting she found it appealing.

“Hi, I am so sorry about this inconvenience. I had my baby last week and googled baby pics to use to illustrate my baby had come, before I take pics of mine. I saw the beautiful baby nails and couldn’t help but use it,” said Halima.

“I never claimed the baby was mine, I don’t understand people on social media these days. I apologise for this. I will delete the picture. Congratulations on your baby. God bless.”

Checks by newsmen showed that the picture was originally posted on the lady’s Instagram page on March 13 — nearly a month after Halima shared the same photo.

The movie star has since deleted the photo from her Instagram page amid several backlashes from Nigerians on social media platforms.