Home News Not Too Young To Run Bill: Group Pleads With Lagos House Of Assembly To Sign
News 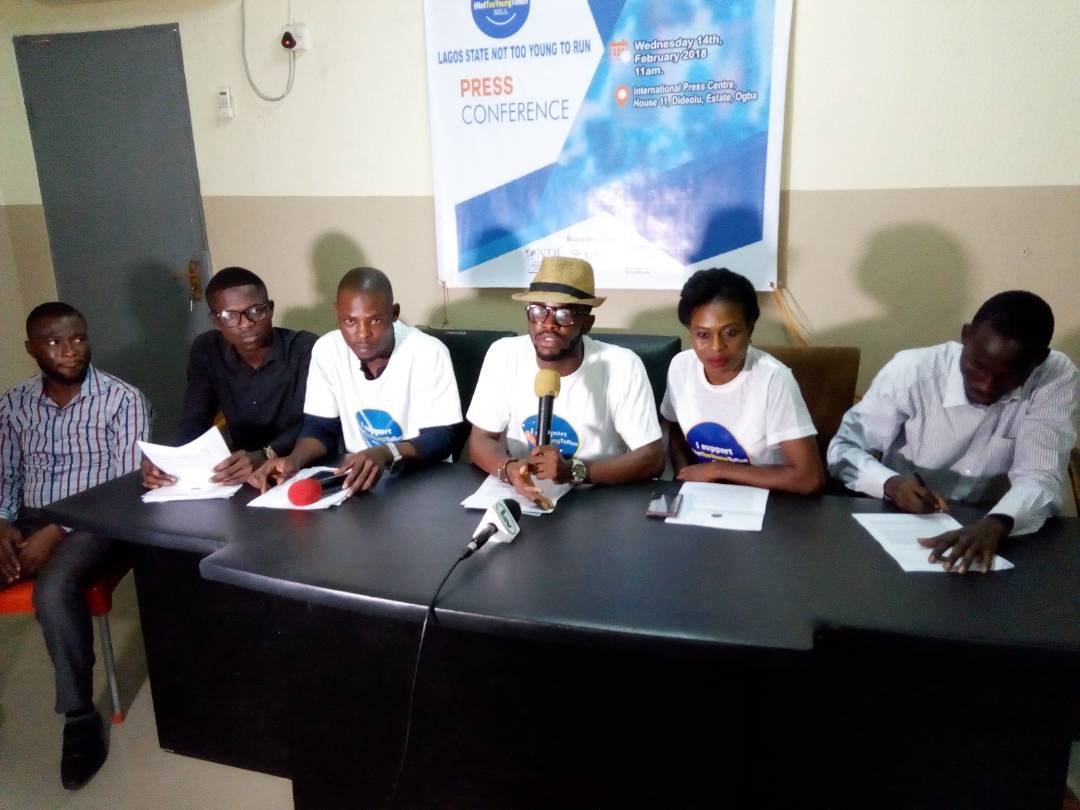 As the 2019 general election draws closer, a clamour for the Nigerian youths to begin active participation in politics especially in elective public offices has been increased with bold steps taken by a group named ‘Not Too Young To Run’ #NTYTR, a movement of youths and society groups advocating for the reduction of age of elective offices to mainstream young men and women in electoral politics.

The group in a press conference held at International Press Center, Dideolu Court, Ogba, Lagos laid its mind bare to Journalists, explaining that the Lagos state House of Assembly is among the few remaining states yet to sign the bill into law.

According to the leader of the group at the conference, Godbless Otubure, the ‘Not Too Young To Run Bill’ also known as the age reduction bill will enable active, resourceful and responsible youths take charge of the political scenes in the country which will at the end of the day bring about fresh ideas and innovations into governance for the betterment of the populace.

Otubure says “Clearly, the age reduction bill like it is called in the house of assembly is actually designed to open up the system for young people to be able to contest and run for elective offices and also to effect true change that reflects good participation in governance.”

“One of the things we are doing in this campaign is that we are demanding that the position of the Youth Leader in all political parties must be occupied by people within the ages of 18-35, that’s a major change and we have said this thing that we cannot change Nigeria by just talking, Nigeria will be changed by politics and through the constitution, That’s what we are doing with the ‘not too young to run’ campaign.

“We are opening up the system, we are not attacking old people, we are just simply saying you are an older generation, we are the new generation, let’s talk about what we want to do for the people; and if the people believe that the younger generation has a better idea, they will vote for us.”

“So the not too young to run is saying don’t exclude me because of my age, that’s just what it is.”

“For anything to become law such that it is a binding order on all citizens, it has to be raised as a bill by the House of Assembly, the House of Representatives and then transmitted to other states for it to become law in those states.”

“What we are doing right now is calling on the Lagos state House of Assembly to say that the House of Representatives have done their part, and 21 states in the country have also done their parts so Lagos should do its part. Lagos takes the lead in everything and this should not be an exemption.”

“We are shocked that as at now, the Lagos State House of Assembly is yet to sign the bill into law. We have tried to meet the Speaker, and we will keep doing our best. This is the second press conference we are having in Lagos with regards to this bill and we will not be deterred until victory is ascertained.”

The group says it is driven by the compelling need to restructure the country’s political system to address the deeply entrenched system of political exclusion and institute inclusive politics, transformative leadership, and healthy competition and transparency in the electoral processes.

Foluke Fabiyi a member of the group says the Not Too Young To Ruu” is an association saddled with the responsibility of ensuring that responsible, reliable and intelligent youths who are willing to contest in elections are not disenfranchised because of their age.

Otubure answering City People’s Damilare Salami on whether the youths are ready to take over says “this is going to every older generation politician and every stakeholder, don’t ask us if we are ready to take over, rather ask us what we need to be successful where you have failed, then Nigeria will be seen as interested in development and interested their young people.”

“To every young Nigerian out there, don’t spend your time watching reality TV shows that won’t add, instead get yourself a PVC, I have mine, I have registered, I voted before and I will vote again. Look for candidates who have the interest of the country at heart and vote them and vote with them.”

“Don’t forget, Not Too Young To Run is not just promoting youths, we are promoting youths with content and character and that is the idea of what we are standing for as an organisation and as a movement.”

“It’s not just to say oh young people should be voted into office, no. Character, content, capacity, development and the will to serve. That’s what the not too young to run is all about and that’s what we are doing.” He concluded.

Not Too Young To Run Bill: Group Pleads With Lagos House Of Assembly To Sign was last modified: February 16th, 2018 by Damilare Salami