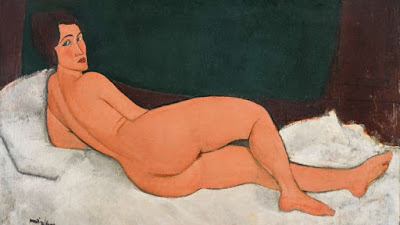 A Modigliani nude once considered obscene has sold for more than $157 million (£116 million) at an auction in New York.

Nu Couche (Sur Le Cote Gauche) was said by Sotheby’s to be the greatest painting from the Italian-born artist’s series of 22 nudes.

Completed in 1917, it was also the largest painting of his career.

Modigliani shocked Europe at the turn of the 19th century with his series of nudes, and his exhibition at a Paris gallery was closed by police on its opening day.

Ahead of Monday night’s auction, the painting was given a $150 million price tag – the highest estimate ever placed on a work of art at auction.

Nude Painting Sells For $157m At New York Auction was last modified: May 15th, 2018 by Reporter