Oba ADEWALE OSIBERU On Life As Elepe Of Epe, SAGAMU 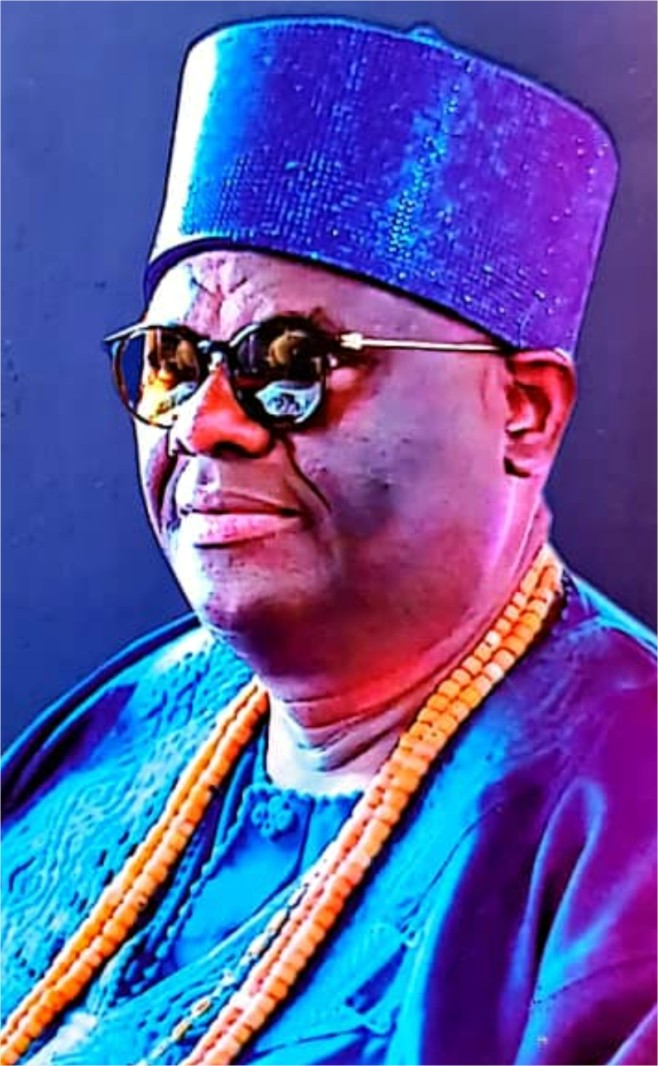 His Royal Highness, Oba Adewale Olumuyiwa Osiberu is the Elepe of Epe (Sagamu). He has been the king for the past 20 years. Last June, he celebrated his 20th Coronation Anniversary Thanksgiving. He is one popular Kabiyesi in Remoland and very active in ensuring that the community he rules over is peaceful. He ascended the throne of his forbears in June 2002. That was when his Coronation and Presentation of staff of office was done by Aremo Olusegun Osoba, who was then the Executive Governor of Ogun State. The colourful event was held at the Wesley School, Oko II, in Sagamu.

What are his experiences like on the throne? How has he been able to better the lives of his people? These and many more questions agitated the mind of City People, when we visited, Oba Osiberu at his palace in Epe, inside Sagamu, a few days back. And we were impressed with his lifestyle. It is quite instructive that he lives in the midst of his people and they freely come to the palace to see him from time to time.

He has also busied himself with solving the problems of his people, in a hands-on manner. He has also maintained a very cordial relationship with Kabiyeesi, the Akarigbo of Remoland, Oba Ajayi, which has led to Oba Osiberu’s involvement in the running of Remoland along with the Akarigbo. It was a very revealing interview.

How has it been as the Elepe of Epe in Sagamu, we asked him? “It has been quite wonderful,” he explained. “It has been a wonderful adventure. I have been here for the past 20 years. When I came in, it was a different thing entirely to me. It was like a call to service. I could see a lot of difference between what I assumed was going to be, and what actually it was. I could see that our assumptions living in Lagos, or Ibadan, and coming home to Sagamu on holidays is different, I wasn’t really integrated into the system, so by the time I became the Oba, it was an eye opener. The level of development that I thought we had, I didn’t see, when I got here, because we didn’t live here in the community. Our father built his house in a part of the extension after the village started expanding. We were only going to the family house. So, when I started living here, amongst the people, I saw a lot. I took a decision when I was installed, to live here in the palace and not to live elsewhere, I was in Ipebi for some time. I took some time when I was in Ipebi. Ipebi is for 3 Lumar months. I spent 6 Calender months, just to make sure that the palace was ready. So, I redeveloped the palace to the level that I thought was good for me. A lot of people wondered then why I was spending my money, why was I wasting money, and why didn’t I go and build a  new place. This is because the amount I spent there could have built a house. But I said to myself that I have never really lived within the system, within the people and I needed time to get to know my people, that was why I took that decision”.

How has he found living with his people? “It has been a worthwhile experience. Living with them has exposed me to a lot of local things and the underdevelopment that we have there. I found out that the people are still living in slums. I thought it was a metropolis with all the development, but I was shocked that it wasn’t the modern city that I thought. Living amongst them gave me that exposure.”

What has been his experience in the last 20 years? “Its been wonderful. It has been quite interesting. When I became Oba I moved my seat out of Lagos, even though my family was still there. But I didn’t leave one single Agbada. Of course, I didn’t want any distraction. So, I just came fully. And I decided that I wasn’t going to be sleeping in Lagos. So, anytime I go to Lagos, how ever late, I will come back to Sagamu. So, I got into the system. And I told myself that I am going to apply myself to it fully, but just within my own local Epe Community, within Sagamu and Remo, and Ogun State. I made up my mind. Why would I leave the comfort of Lagos, my business, to come in here, and then end up not understanding my community? Ever since, I have applied myself to everything. I have applied myself to Epe, Remo, Sagamu, Ogun State. I get involved in virtually everything that happens there, that concerns Obaship and whatever roles they want to play, I get involved in it”.

How has he been able to improve on what he met? “We have done a lot. I have also been able to get the government to help us out. I started out, first, by making sure I got close to the government, not to lobby for myself, but for development, for my people. Luckily for me, less than a year after I was installed, Otunba Gbenga Daniel became the Governor and he happens to be my schoolmate. So, I went to him on the need for development. I told him we need to have tarred roads in Epe. For the 1st time in centuries, we tarred the roads up to the palace, everywhere.”

“Subsequently, I made sure that every little thing people can get from the government, I made sure we got it for our people and farmers at that time. We got fertilizers. We got them registered. They set up cooperatives, we got them loans. It positively affected their lives.”

“Like I said earlier on, there was no real development before I came in. There was no pipe-borne water within the metropolis. I didn’t want to be selfish, so I decided to do boreholes for the community. If I wanted, I could put up a borehole for myself. But what will be the benefit? So, I got some agencies to donate boreholes. There is one by the road, as you approach the palace. That borehole, I connected that to the palace, from the main road and I  distributed that to some old people’s homes, some old women who live alone. I was always monitoring it because some people were doing illegal connections. I pay the bill. And I monitored that it worked properly. It is just a way of improving a lot of the people.”

“Just recently, we built a Health Centre which we never had before, although it had been in the pipeline, since 2004. There was a day I went to see my former boss, Tunde Dabiri. He was the MD of Magnum Trust Bank then. We were together at Fountain Trust. He was my MD then, so I went to see him for something else. He now said, haaa, there is the need for us to assist you and your community, what can we do?

“He now said can we build a block of classes for your school. I said No. We don’t have schools here because we share schools with other communities. He then said maybe they could do a day care centre for us, unfortunately, we don’t have land. We are land locked. The piece of land that was available people refused to let go of until the community decided to pay for that. That was why it came so late.”

“But in building it, I taxed our citizens abroad, mostly abroad and even in Lagos and a few of the locals. So, it was built 100% from monies sourced from the community. I then called on some particular agencies set up by the Akarigbo which then helped to finish it up and they provided the necessary facilities. Again, when Otunba Gbenga Daniel was the govenror, I approached him to say that there was the need for us to create a new town because we are land locked here. Epe happens to be one of the 13 communities that came together in 1872 to start Sagamu. They all came from different homesteads. Within the  Remo Rubber plantation, on the way to Ikenne that is where we were. We have over 1,000 to 2,000 hectares of farmland. They were all acquired in 1959 or there about by the Western Region Government to develop the Remo Rubber Plantation as well as the Settlement. So, I went to him, in 2005 and said to him that we needed to get part of that land back and that there is a need for excision so that we can start a new town. He graciously granted that and we did the planning, through physical planning, and we paid. Because of government bureaucracy, we could not get the papers until 2009. And in 2010, we started working on it. We tried to apply to NEPA for a sub-station, and it was granted. Unfortunately, in 2011 the government left, Amosun came in and he said he was looking into lands that were approved by OGD, and he revoked the papers. But we are still talking to this government for the same thing. Because truth be told, there is a limit to our expansion here. Our people have been going out, elsewhere to buy land to build. There is nowhere to expand here. We are just landlocked here.

We can’t really move beyond where we are now. A lot of people don’t even know where Epe is. When they hear Epe, they think it is Epe in Lagos State that you are talking about. We are within Sagamu. We don’t have schools that we can say this particular school is in Epe, inside Sagamu. That would have helped us a bit to publicise our community. In the layout of the new place we are planning, there is a place of worship, motor park, market place. We just pray we can get that place back and we can go back to create a new town.

THE NEXT BULL: SUJIMOTO BAGS ANOTHER BUSINESSDAY...