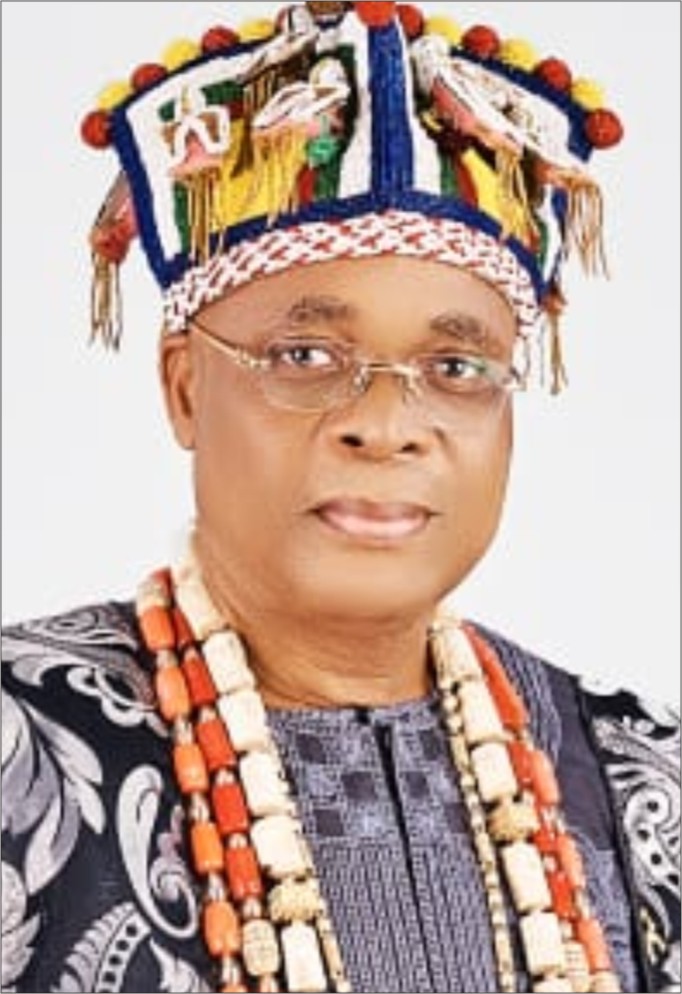 A lot of dignitaries also attended. For days, Esure town was agog with various celebrations. It was a 2-in-1 event that took place at the prestigious Most Pure Heart of Mary Catholic Church Hall,  Esure Ijebu – IMUSIN, Ogun State and paraded many top government officials, monarchs and other well-wishers. City People’s Reporter, Titilope Oshunlalu and photo journalist, Gboyega Adeleke, were there to serve you the gist from the crème de la crème event.

Right from the moment you drive through Lagos – Ijebu garage into Esure town, a big photograph of  Oba ABDUL SAMAD OLALEKAN KASALI OBELU OF ESURE IJEBU IMUSIN was conspicuously mounted for all to see. The big banner was evidence and an assurance that the guests who were coming to share in the joy of Oba ABDUL SAMAD OLALEKAN KASALI and his new chiefs were in for a great time. All roads leading into the town were thronged with exotic and expensive automobiles.

The event also boosted economic activities of the town while it lasted. Oba ABDULSAMAD OLALEKAN KASALI, was overwhelmed with the level of development the town has witnessed under his reign. He beamed with joy as he majestically welcomed his guests.

INSIDE THE HALL WHICH HOSTED THE EVENT

As you drive into Esure Town, you will notice a big Catholic Church on the left which could seat over  3,000 guests. The hall is not far from the king’s newly built palace.

The hall was decorated with cream, white and magenta which also added glamour to the event.

A few minutes past 11 am, the hall witnessed the arrival and grand entry of his imperial and royal majesty, the Obelu of Esure town, many guests who haven’t seen the royal entourage of Obelu of Esure town were amazed and appreciate the prestige and dignity associated to African culture. The villagers/town criers/traditional drummers kept chanting, singing and praising the ebullient and charming king, while the king waved with a smiling face to the crowd.

Former Deputy Governor of Ogun, Mrs Yetunde Onanuga, was the Chairperson of the event. She walked in magnetically a few minutes after the Obelu of Esure, made his grand entry. She was present with the occasional her amiable and loving husband who is also a son of the soil of Esure town Otunba Biodun Onanuga, the CEO of Nugacon, Otunba is also the Chairman of the event.

Pastor Dr Olubi Sarah Johnson, was also in attendance. She appreciated the king for the good work he has been doing in the town. She prayed for long life on the throne for the king.

GOODWILL MESSAGE BY THE CHAIRMAN OF THE EVENT

The Chairman of the event Otunba Biodun Onanuga (CEO NUGACON) in his goodwill message mentioned how he was elected as one of the chiefs in the town like 30 years ago. In his speech, he said the late and former king who happened to be the father of our present king was the 1st veterinary surgeon in Nigeria. His legacy and good work lives on. May his soul rest in peace.

Give it to the king of Apala himself, Musiliu Haruna Ishola. He serenaded many guests, as they all danced for hours at the event. He dished out hot apala songs that kept many guests on the dance floor for hours.

Former Deputy Governor of Ogun State, Mrs Yetunde Onanuga, who was the Chairperson of the event wish Kabiyesi success in all his endeavours and success on the throne in her speech

Pastor Sarah Johnson, also appreciated the Kabiyesi for the developments in Esure Town.

UNVEILING OF THE ESURE TOWN ANTHEM

Friends of Kabiyesi went all out to compose an Anthem for Esure Town. They went to the studio and made sure the album/anthem is unveiled on the 1st Anniversary of Kabiesi on the throne.

There was also the unveiling of the new palace. The new palace is a storey building opposite the Mary Catholic Hall with spacious rooms, offices and a spacious compound, well painted. It is painted cream and brown in colour.

Kabiyesi appreciated all the dignitaries, politicians, kabiyesi’s, friends and families in his speech. He said there were issues before he got to the throne, but thank God he was able to resolve all and was able to achieve the followings:

THE NEW AND ELECTED CHIEFS