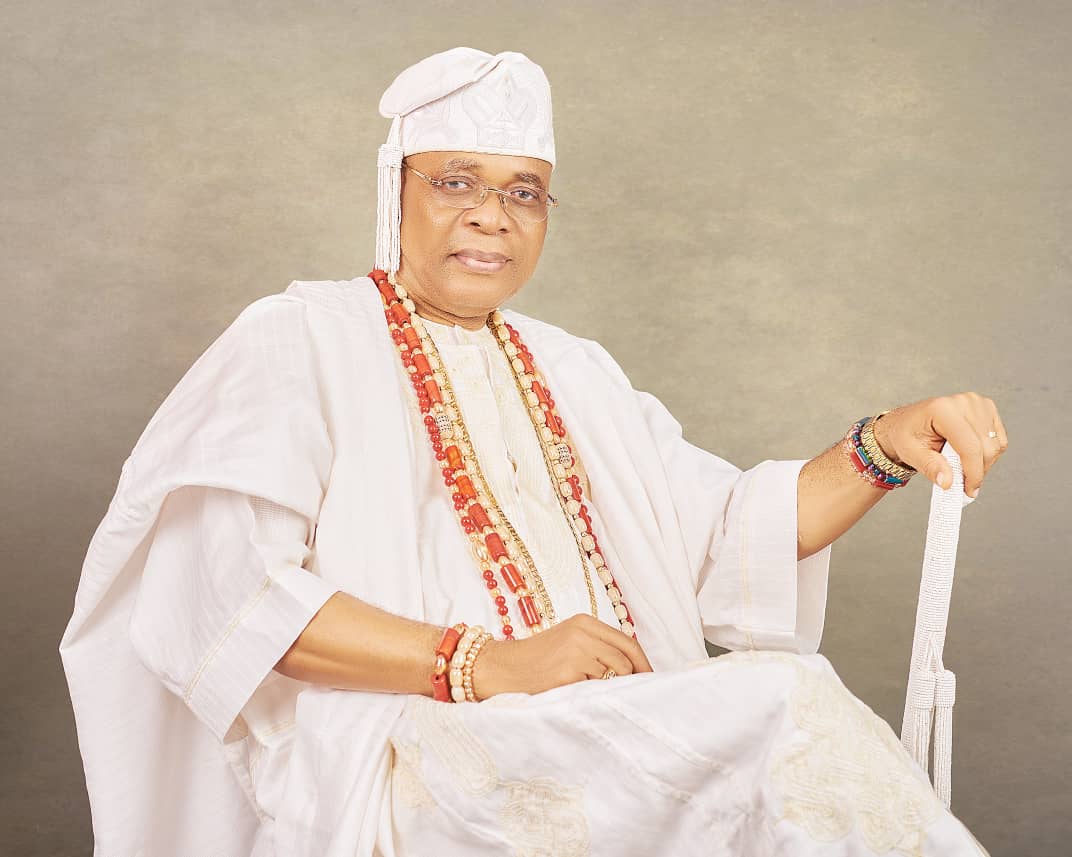 To mark the event there was the unveiling and rendition of Esure Anthem, unveiling of the Obelu’s Palace complex design and presentation of Certificates to new Chiefs. “I want to welcome and appreciate our royal fathers, our guests and everybody whole heartedly to this occasion and particularly welcome you all to ESURE, IJEBU-IMUSIN” said Kabiyeesi as he welcomed guests. I appreciate you all for honouring my invitation and for taking out time to celebrate with me and the entire good people of Esure Kingdom.”

“I am highly impressed with the turn-out of this joyous crowd that has turned out to rejoice with me on this my first year coronation anniversary. I am not surprised because I know we are all celebrating the faithfulness of God that has heralded the Dawn of a New Era in our town (ESURE) Ijebu-Imusin.

I thank you all, Almighty Allah will honor you all. My gratitude also goes to Esure Traditional Council (ETC), COTUCHADE, ECDA. You have all been supportive in the process of directing the affairs and administration of our town, Esure.1 also want to acknowledge the youth and I commend them fortheir peaceful conduct.”

“To our sons and daughters in Diaspora, I thank you all for being worthy ambassadors of our town in every part of the world and for your immense contribution to the development and progress in Esure. The Almighty Allah will continue to bless and prosper your ways.”

To all the non-indigenes resident in Esure, I greet you all. We never see you as a strangers in the community, but as one of us. I commend you, forthe good conduct you have been exhibiting and for your support at all times. I will not forget the Alarada Ruling House, my family members both home and abroad, my children and my wife Olori (Ayaoba Temitope Kasali) who has been my pillar of support in diverse areas at all times. I thank you all for your support since I ascended the throne of my forefathers.

We have also been able to execute the following projects within one year on the throne: (a) Renovation and building of new structure at our ancestral home in MOGEBELU, Ijebu-Ode. (b) Revitalization and building of a new market (Ita-Esure Market). (e) Provision of solar- powered street lights across Esure streets. This has made the town attractive at night and a deterrence to activities of criminals who hitherto could hide under darkness to perpetrate their nefarious activities. (d) Provision of walkie-talkie and security materials for vigilante to help the security of lives and properties. (e) Construction of drainage channel at Olode street forfree flow of storm water (f) Scholarship for an indigene of Esure yearly for ICAN Exam, to become a chartered accountant – courtesy: TOPNOTCH Learning Centre. (g) Financial support for the Magistrate Court Building project which was approved recently for Ijebu-Imusin by the Ogun–State Chief judge: (h) Provision of drugs and modern equipment for the operation theatre of st. Albert The Great Clinic in Esure for the service of the indigenes of Esure and ijebu-imusin in general. (i) Provision of electricity for one of our primary schools–St. Peter Claver School, Esure Ijebu -Imusin.

(j) Provision of financial support quarterly to some of the elderly/old people in Esure. (k) Support and empowerment programme to Esureyouth forum (EYF): with provision of motorcycles.  (I)Re-surfacing of Esure roads by Ogun State Government. A recognition of Esure community as a gateway to Ijebu-Imusin by His Excellency Prince Dapo Abiodun (MFR). We thank our people-oriented Governor for keeping his promise. (m) The unveiling and rendition of Esure anthem as part of the anniversary programme. (n) The unveiling of the OBELU PALACE COMPLEX DESIGN today for a befitting modern palace for Esure Kingdom. A1so in recent time, I have had the opportunity of hosting potential investors and have received proposals from entrepreneurs from both home and in the Diaspora who have shown interest to invest in our town. I want to use this opportunityto inform you that we will accommodate these business ideas and offer them a viable location fortheir business enterprise within our industrial layout zone and it will gladden your hearts to see our town industrialized and our youths

“To many Sons and Daughters who have bought parcels of land and are yet to develop them, I implore you to do something good on the land on time so as to open up our community. Also along the Benin– Lagos express-way plans are on the way for a modern/international market as well as Trailer park. The architectural design of this Modern Park and market will be unveiled during the Etumora Day celebration in November, 2022. We will ensure the revitalization of Etumora market built many years ago along the Benin- Lagos express-way and give itto investors who will Build-Operate and Transfer (BOT) to the community. I have spoken to investors who are willingto participate in this project.”

“Your maximum support in these regards, will no doubt propel me to forge ahead in the realization of our dreams for a united, peaceful and progressive Esure Kingdom.

In conclusion, I want to thank everyone that has made this day to be glorious. The entire members of the First Year Coronation Anniversary Committee under the chairmanship of Otunba Rotimi Oshun (Otunba Tunwase of Esure Kingdom) for their dedication and hard work in making this anniversary a success, as well as everyone that has contributed their time and finance. All your efforts towards today’s success story count and I appreciate your sacrifices, participation and contribution. God Almighty will reward you all abundantly.”

“Lastly, I also want to congratulate the new recipients of Chieftaincy titles in Esure on 21st July, 2022. You are all welcome on board and the task ahead now is your further dedication, loyalty and contributions to the development of Esure. I took the decision to confer chieftaincy tittles on these indigenes because of their contribution to the community and outstanding representation in their various fields of endeavors, their character, business acumen and public disposition and i have found them worthy as Esure men and women who are also culturally inclined and traditionally oriented personalities. They will promote and facilitate developmental growth as well as our Cultural Heritage in Esure Kingdom.

Who is Alaiyeluwa Oba Abdulsamad Olalekan Kasali, the Obelu of Esure? We can tell you. This handsome and stylish man was born in Esure-Ijebu Imusin to Late Alhaji (Chief) G. K. Kasali from Alarada Ruling House and Late Alhaja Atinuke Kasali (nee Eniafe) from the Jandu Ruling House of Esure-Ijebu Imusin. He started his primary education at Moslem Primary School Esure Ijebu–Imusin and also attended the prestigious St. Anthony’s Grammar School Esure Ijebu-Imusin from 1973-1978. He then proceeded to Adeola Odutola College, Ijebu-Ode for his Higher School Certificate (HSC) before proceeding to the University of Benin where he obtained a Bsc in Geology. After graduation, he served at the Chad Basin Development Authority in Maiduguri, Borno State and after NYSC he joined Lagos State Teaching Service Commission in 1987 and taught for 7 years. He later joined Ideal Savings and Loan Ltd as Head of Treasury and Investment.

He thereafter obtained a Post graduate Diploma (PGD) in Financial Management from University of Ibadan and also an MBA in Banking and Finance from Olabisi Onabanjo University in Ogun State. He is an Associate member of Certified Pension Institute of Nigeria. In 2007, he pioneered the establishment of Broadview Microfinance Bank Ltd, fully licensed by CBN and has been the Chairman of the Bank till date. In recognition of his outstanding contribution to national development in the sphere of Microfinance Banking and Economic Development, he was conferred with Development in Nigeria Merit Award by PSR in 2009.

As a Banker and Investment Management expert, he made laudable contributions to the banking consolidation exercise in Nigeria in 2009. He is always committed to adding value to Business, Organizations and people through effective communication, ideas generation, excellent managerial ability as well as offering professional services in Investment and Fund Management.

An astute businessman, he is the Chairman/CEO of many fast growing companies, which include: Broadview

Mercantile & Trust Ltd (an Investment company), Damibol Ventures Ltd (a property development company), Caska Nigeria Ltd (Procurement and Services Company). In the year 2013, Abdul Samad Kasali ventured into the hospitality business by setting up Templars Hotel Ltd in Lagos and he is currently the Chairman/CEO.

He was bestowed with a traditional title of Otunba Alarada of Esure Ijebu-Imusin by the immediate past Obelu of Esure, His Royal Highness HRH (Oba) Dr. KAO Sansi, the OBELU OF ESURE UEBU-IMUSIN in the year 2010. For his contribution to Islamic Religion Oba Kasali was also bestowed with the title of Seriki Adini of Ifesowapo Mosque in Idewon in Ijebu-Ode in 2012 and was also honored by Esure Muslim Community as the Aare Musulumi of Esure Central Mosque in theyear 2017. Obelu Kasali has also contributed immensely towards the upliftment and development of Esure Community, socially and financially. He financed the fixing of 6 boreholes in Esure to enable people to enjoy free flow of drinking water. His financial support was also extended to the Esure Central Mosque, the Catholic Church and the traditional “Agbo – Oluweri” which benefitted during renovation/roofing of the cultural/traditional house.

Help! My Fiancee & Brother Were Once Lovers!