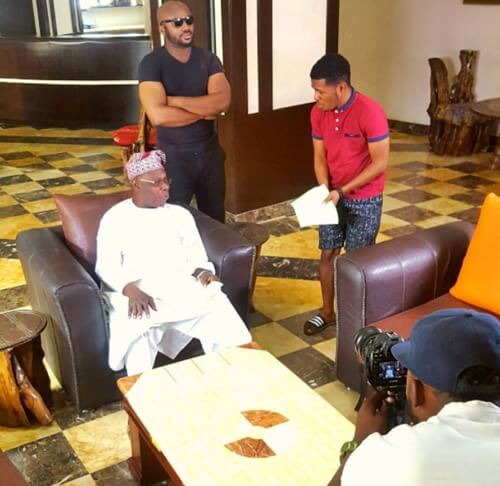 Former President, Chief Olusegun Obasanjo, has converted his multi-million naira home inside Presidential Hilltop in Abeokuta into a hotel. The Owu-born politician, now resides in a private apartment inside Olusegun Obasanjo Presidential Library (OOPL), not far from is former home. One can not but wonder why he left his beautiful home where he used to play host to important personalities including foreigners and converted the mansion into a hotel.

His former house, now renovated to a hotel, has become an extension of the Green Legacy Resort also located inside OOPL, behind the Nigerian National Petroleum Corporation  (NNPC) area of Abeokuta.

His former mansion was  located in an area where the super rich live  in Abeokuta  was earlier known as Olusegun Osoba Hilltop, now Presidential Hilltop. It is directly adjacent to the NNPC mega station,  beside the National Open University of Nigeria (Noun). It was commissioned during the administration of Aremo Olusegun Osoba. The former President Obasanjo’s beautiful mansion and homes of other Super-Rich Ogun indigenes like Segun Ajibola, Tunji Sunmonu, who owns Sky Pavilion building on Oke Ilewo with several other thriving businesses in Abeokuta) are sited at Hilltop.

Aremo Olusegun Osoba, who opened up the Hilltop is also the owner of a large expanse of land adjacent to ex-president Obasanjo’s house. The presidential Hilltop is bordered, to the left, by Oke Sari Village, an Old Serene Egba Settlement, which has also developed immensely owing to the establishment of the Hilltop. Most of the first allotees of Land on the Osoba Hilltop included people who were close to Aremo Osoba like the Late Oluwo Segun Taiwo.

Some prominent traditional rulers in the state are also beneficiaries. The most fascinating thing about the Presidential Hilltop is its well tarred road that are brightly lighted at night and serene environment, which make the area attractive to visitors at all time and a haven for the Super Rich.

Obasanjo’s mansion inside in the estate is not just massive, but  visible and could be sighted from different areas in Abeokuta. Visitors, might mistaken the mansion for a five-star hotel, considering its huge structure on a hill. It is the biggest and largest property in the estate.

No one will ever thought that Baba would leave his beautiful multi-million naira mansion for a smaller, but cozy apartment inside his OOPL. Surprisingly,  the home he exited is now a hotel. Lodgers are being taken to his Hilltop home to check out on the new rooms when there is congestion at the main Green Legacy Resort.  According to an insider, Baba’s room at his former home was neither renovated or converted for public use. Everything there is still in place and it costs a hundred thousand naira to get the room per night, which some people see as adventurous. The Hilltop home now has thirty-six rooms for lodgers.

Now, Baba, as he is fondly called, enjoys the atmosphere of OOPL, which is more or less a city on its own, located at the back of the main library.  OOPL is a one stop adventure zone that has everything anyone would seek for fun or official purposes. On entrance, a visitor’s eyes rove and feed on an array of architectural opulences. Close to the main gate is a big Amusement Park.  Other imposing structures are: a Church, a Mosque, Kids  Store, Adire and Daviva Store, a 1,200 Capacity Marquee, the Green Legacy Resort with more than 200 rooms, four different Capacities Conference Centre, two Swimming Pools, a Jazz Lounge, a club, The Bamboo bar, a Salon, a Spa, a Gym, the Karate Centre, the Hill Bar, the Main Auditorium, the Cinema, the Main Presidential Library, Challets for senior staffer, the Wild Life Park and more.

I can never leave Buhari for Atiku in 2019 – Tinubu declares