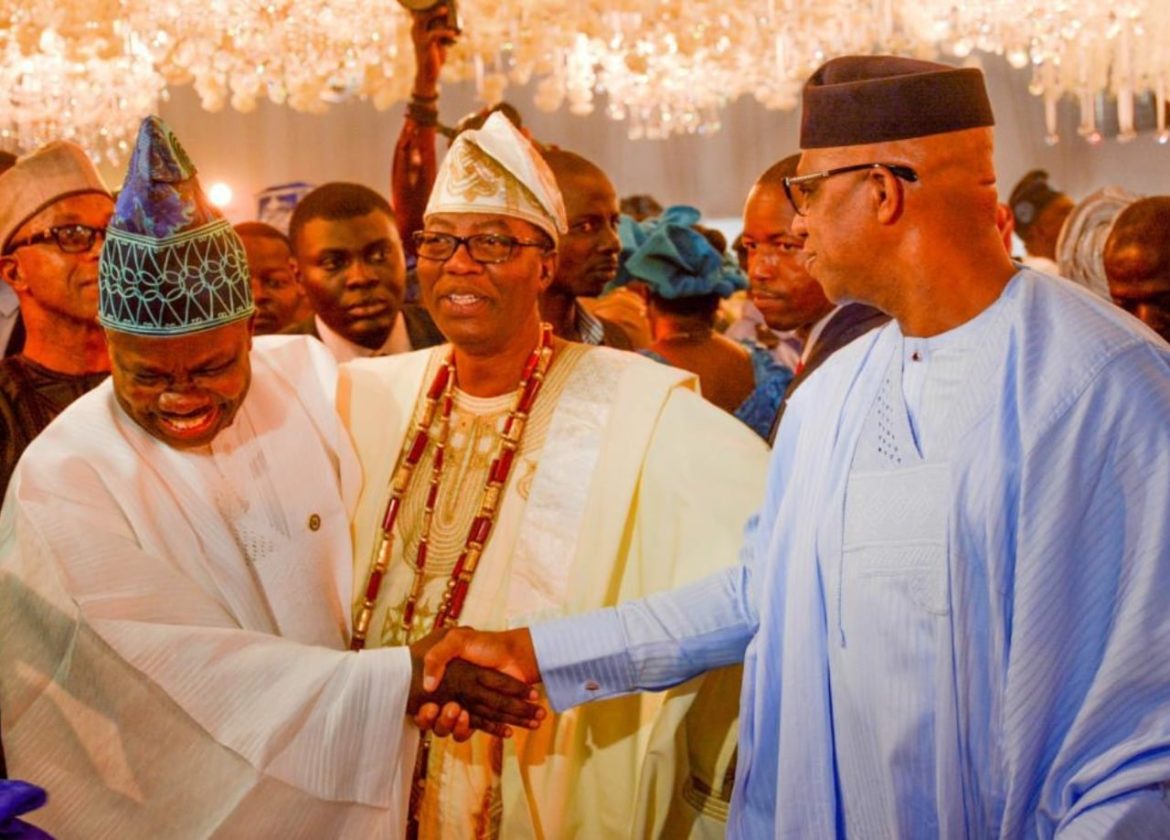 •City People Reveals What They Did To Each Other

It was Otunba Gbenga Daniel that first arrived at the burial service and when Senator Amosun arrived, he was ushered to sit next to his predecessor when he was the Ogun Governor. Both greeted amicably and when it was time to make speeches, it was OGD that first made his speech wherein he referred to Amosun as My Brother.

By the time, it was time for Amosun to make his own speech, OGD was still present at the church service and he received his comments with a smile on his face. Meanwhile, Amosun made kind remarks about OGD. He also referred to OGD as My Brother.

What made their meeting at the event all the more newsworthy was the age-long rift between the 2 political juggernauts.

Both started their friendship years back as political associates along with the present Ogun State Governor. At that time, the 3 of them were referred to as the 3 musketeers. Some even referred to them as the political trio. They were a strong team and Amosun and Governor Dapo Abiodun supported OGD’s bid for the governorship. The gentleman’s agreement we heard was that the 3 of them had governorship ambition and since they were close friends and associates they had the understanding to nurture the ambition of the other 2.

But along the line, explained an insider, the 3 friends quarrelled and Amosun after taking over from OGD, as Ogun Governor, decided to launch an attack on all the legacies OGD left behind and even got the EFCC to engage his predecessor in an age-long trial, which is still ongoing.

Before the expiration of his 8-year term, Amosun & Prince Dapo Abiodun also fell apart. And both were engaged in a fierce battle, as Amosun did not support Abiodun’s bid to run for the governorship. The stiff opposition Amosun gave Abiodun, made OGD & Abiodun team up to battle the governorship candidate that Amosun fielded. It was after Amosun left office and Abiodun took over that OGD eventually got back his hotel complex which Amosun seized among many other things.

That was how bitter their fight was then. But mutual friends have since stepped in to reconcile the 3 friends. Though the 3 of them have since reconciled themselves, there is still a palpable cold war between the 3 of them.

That was why it was big news that Senator Amosun attended Gov. Dapo Abiodun’s father’s burial a few days back in Iperu Remo and his decision to greet OGD at the burial service of Primate Olorunwo.

As someone said, it could be a way of showing respect to late Primate Olorunwo who both of them hold in high esteem.

Both of them share something in common when it comes to Primate Olorunwo. They both enjoyed the blessings and prayers of the late man of God. They both revealed at different times that Primate Olorunwo would call them, pray with them and share some prophetic instruction or useful information.

Although these two political juggernauts share a lot in common, they share different political ideologies. An inside source revealed that they both might likely run for the presidency in 2023 and while OGD appears to be likely more favoured having dumped the PDP for APC, Senator Amosun can as well emerge as the Senate President should he return to the house in 2023. All these are mere political calculations that some bookmakers have noted.

In the meantime, they both have reunited and referred to one another as brothers all thanks to the late Primate Olorunwo. He has performed one of the unimaginable miracles in his death.

Below are excerpts from the speech of His Excellency, Otunba Gbenga Daniel at Primate Olorunwa’s burial…

“I greet all the spiritual fathers here seated and I say thank you for staying by us. You stood during and after the Primate’s life, may God abide with you too. Thank you for the honour you have done for our Papa.

Your Excellency, our governor, senator and your darling wife, her excellency former executive governor. Elder statesmen are quite many here, High Chief Adewale, your lordship, I recognize all of you very distinguished ladies and gentlemen.

I also seize this opportunity to greet mama, the wife and children of the deceased, and all grandchildren. I say please accept my condolences.

Baba the Archbishop Olorunwo was a most amiable personality and a man of God and very lively too. I had the opportunity of speaking with him a few weeks ago, he just called me from nowhere and was praying for me. I didn’t know that that was the last time I was going to hear from him. We thank God for his life. I must confess that while in office, he was a pillar of support and he supported our administration in all ramifications. I am also quite excited that he also supported my successor.

The only thing is that you know that I am the Aare Ajiboshin of Owu kingdom, he, unfortunately, refused to take any title. I want to congratulate all the men and women of Owu who are here because I can see Owu solidarity and I have no doubt in my mind that the kingdom will continue to grow from strength to strength.

There is not much for us to say rather than greet us all and condole with us. We thank God that Papa didn’t die a young man. He died at a very ripe age but whatever the case might be, even if he gets to 100 years, we would still want him to be here with us. I pray that we shall all be strengthened and I want to plead with the children not to entertain any fears, your father has lived and has left a great legacy and I’m sure that at any time, that will speak for you. Once again, I say thank you very much.”

When it was Senator Amosun’s time to make his speech, he didn’t mince words at all. He made bold statements about his predecessor with smiles on both of their faces. Below are excerpts from his speech.

“Let me start with the elders first, I will come back to my brother, His Excellency, Otunba Gbenga Daniel.”

“Let me thank those who were here yesterday. I asked if I was going to speak today again after I was called to deliver a speech yesterday and they said yes. I wanted to decline speaking yesterday but I was refused, they said I just had to say something, which I did. I would not want to bore us again, the only thing I would want to say is that Baba’s life was a lesson to all of us. While we are here, we must try to do good to as many people as we can. If you listen to all that was said about him and I told you my own personal encounter with him as well. It is not as if I see Baba every day, no I told you, I only got to know him some years ago but I noticed that Baba is always present in anything we are doing in Owu and he would always stay from the beginning to the end and when we wanted to build the Mosque, I explained how he gave his land and also was fully involved in the building of the Owu Central Mosque, and that drew me closer to him. I think it was in 2007/8 and ever since that time, we’ve been quite close. I told you yesterday how baba used to call me, I thought that I was the only one that Baba calls that way, now MY BROTHER (OGD) told us that Baba calls him too.”

“The last four of five times that I met with Baba, it was him coming to celebrate one thing or the other with me. My birthday, my wife’s celebration, when we had our baby, you will see him coming to Abeokuta to play with me… it’s just that I’ve not had the opportunity to attend any programme here in the last three or four years. But one thing that I know is that Baba’s daughter, that is my wife, will always be here. She would call me and give me the phone to congratulate Baba. But one thing that he does and I’m happy that he (OGD) mentioned it too, Baba would always call me and if there’s anything that is always happening in the polity, he would pray for me. And for someone like me who doesn’t even call to check up on him, you will clearly know that he truly likes me.

So, a lot has been said about Baba, we should just try and find a way to help the family stay strong. Baba loved everybody and worked so hard to see people remain happy and of course, we all can see what he did in the Lord’s vineyard. May the Lord be with you all keep you and give you the strength to be strong. I am one of Baba’s children too, so the prayers I am saying for you are also for me as well. I pray that God will be with all of us.

And to my brother (OGD) Baba is my father… he said I don’t have a title (laughs) we gave you that title, because we are the prince. My great-grandfather was an Olowu of Owu, so we don’t take titles. And, he’s my very good friend, thank you for honouring Baba, I am very excited when I came in and saw you. Thank you, the Almighty God will honour you too.

Our fathers in the Lord, our fathers and mothers, Mummy (Baba’s widow) I greet you, my brothers and sisters, I greet you all. May the Lord be with us all. My fathers, this  shall end in joy for all of us.”

The PDP Must Zone The Presidency To...