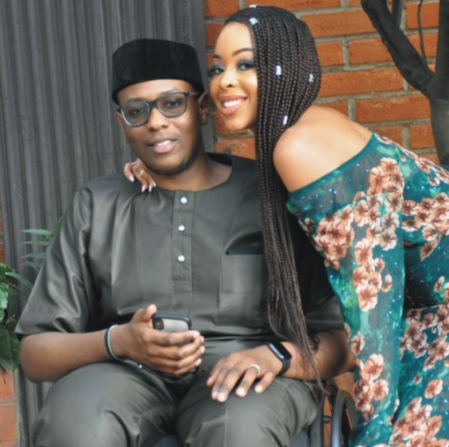 Natasha Morisson is the beautiful lady Debola, one of the sons of the former Ogun State Governor “Otunba Gbenga Daniel, is dating, and City People can tell you preparation is in top gear to celebrate their union in a big way according to Debola.
Natasha is a Jamaican, but one would never know because she related well with everyone that came around for the 62nd birthday of Otunba Gbenga Daniel. She was seen greeting people, smiling and hugging as if she understands Nigerian Culture already. She is just too pleasant.

In a brief chat with City People Assistant Editor Sunday Adigun, Natasha revealed how she met Debola on Instagram. They went to the same University, became good friends, went to church together every Sunday, before they became lovers, which will very soon metamorphose to marriage by first quarter of 2019.

Where is Natasha from?
I’m from London, I’m a Jamaican, I’m here to celebrate with Debola’s family. Celebrating his Excellency’s 62nd birthday, and I wish him a happy birthday.

Being Otunba Gbenga Daniel’s son’s girlfriend, how does that make you feel?
To be sincere I’m very nervous about the position.
I’m very new to seeing people, important guests coming around, it’s nice. It is amazing and an unbelievable experience, but I’m sure I’m going to get used to it.

I’m sure you know, getting married to Debola will transform you into a celebrity?
I don’t think so, because I’m not sure of tomorrow. I’m just thinking of the present right now.

So what can you say about Debola?
Debola is the sweetest, kindest, most caring guy. He’s like an Angel, he stands out, he’s funny, he’s the best man I’ve ever met in my life, he’s lovely and he’s my best friend.

What should we expect from your relationship soon?
Well, he said, an Engagement is coming very soon.

I thought that was meant to be a surprise because Debola told me you didn’t know about it?
I don’t know, I’m always surprised everyday, everyday he wakes up and he surprises me by saying something amazing.

How can you describe your father-in-law to be, Otunba Gbenga Daniel?
He’s very inspirational. He’s kind, he’s always happy, he’s a family man, and he has a large heart. He’s lovely. I can’t wait to be part of the family. Debola’s Mum too is lovely, I love her so much, I call her my mum.

How The OONI & OLUWO Ended Their 2yrs Rift