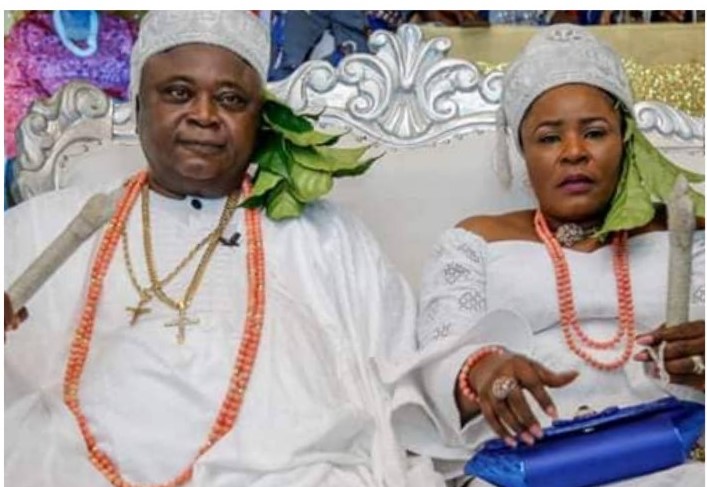 •At ODO JOBORE In IJEBU

The governorship candidate of Peoples Democratic Party in Ogun State, Hon. Oladipupo Adebutu, has been conferred with the royal title of Baba Oba of Odo-Jobore town.

The politician was honoured alongside his beautiful wife, Mrs Adenike Adebutu, who was installed as ‘Yeye Atunluse of Odo-Jobore’ by the traditional ruler of the Ijebu town, Alayeluwa, Oba Surajudeen Ogunbowale, Kobowore of Odo-Jobore.

The ceremony which took place at the St. Michael Anglican Church, Odo-Jobore, was attended by dignitaries from different corners of Ogun State.

While conferring on Adebutu the title which he declared is for the political and social development of the town and Ogun State in general, Oba Ogunbowaledescribed the recipients as persons of integrity, adding that Adebutu is a true democrat whose passion to serve humanity is exemplary.  While appreciating the elders and people of Odo-Jobore for the honour bestowed on him and his wife, Adebutu promised to ensure that more developmental projects get to Odo-Jobomore and other communities in its environs. He also assured the people of the town of equal participation in governance, if elected governor. “Our development won’t be focused only in the central parts of the state, it will be distributed equally among all zones, including Ijebuland. This royal honour for me and my wife, I understand, is meant to spur me to do more towards the needs and yearnings of our people,” stated Adebutu, the newly titled grassroots politician, whose mother, YeyeCaroline Adebutu, is a descendant of Jaiyesimi Okuwa family of Odogbolu Ijebu.