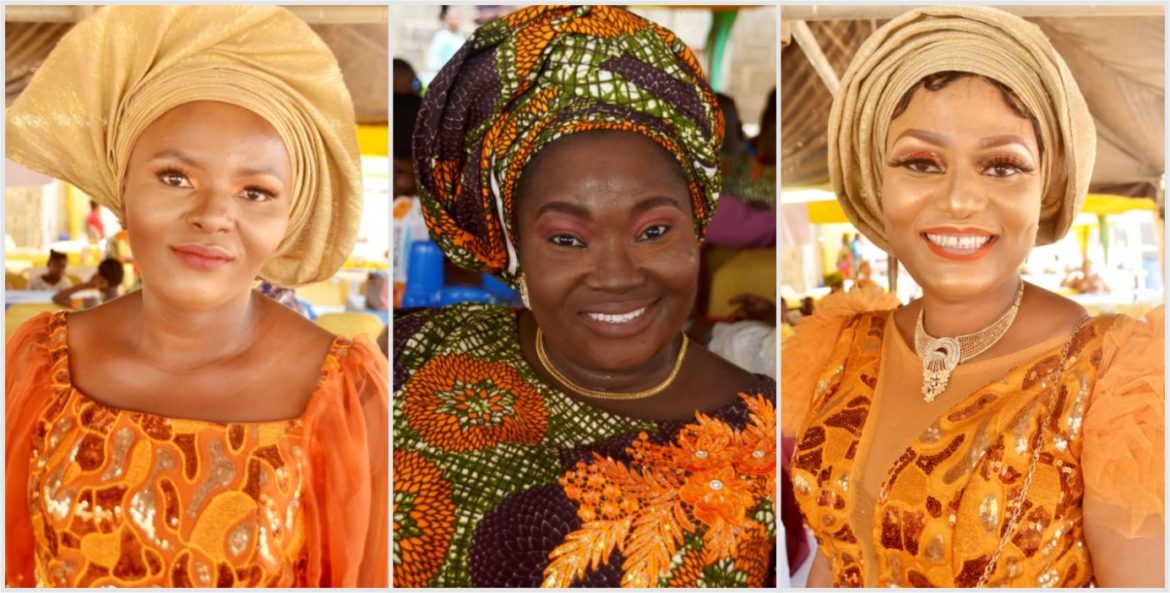 •As Madam FADEKE ELIZABETH KEHINDE Is Laid To Rest

Yewa Isawo area of Ikorodu in Lagos gladly received guests, family, friends and well-wishers of the late Madam Fadeke Elizabeth Kehinde whose remains was laid to rest on Saturday, February 13, 2021 at her home. The event which was quite emotional and had a lot of mixed feelings brought to the fore, the pleasant life lived by this mother of six children.

City People’s DAMILARE SALAMI 08155134152 was at the event and he brings you the details of all that went down there.

The day started brightly with members of Mama’s church, friends, family and business associates gathering at her place of residence where the internment service held. Expectedly, her children, family members and other loved ones shed uncontrollable tears as the priest pronounced the popular final goodbye phrase “from dust to dust and ashes to ashes”. All those present paid their last respect as Madam Fadeke’s remains was rolled down to its final place of rest.

City People spoke to a few people at the event who gave their view of the kind of person the late Madam Fadeke was. One of them was her daughter, Olayinka Kehinde who revealed how impactful Mama’s 60 years sojourn on earth was. She said: My mum, Iya Yemi as she is fondly called was a very lovely, jovial and gentle woman. She was down to earth and very accommodating. She hailed from Ekiti State, Ipetu to be precise. We lost her on the 19th of November 2020 after a brief illness. Mama was a mother of six children, five females and one male. They are Olayemi, Olabisi, Olayinka, Olaitan, Olabode and Oluwabukola. She was an active member of the RCCG in Ketu before she moved down to Isawo. Mama was a dedicated businesswoman who sold food stuff. She was very active until her in the business until her death.

The event stood out among several others in that vicinity and one thing that made it stand out was the Ankara Aso-Ebi. Burnt orange was the colour of the day and many of the guests were adorned in the colour. It was an array of different shades and styles of the colour but those who wore the Aso-Ebi stole the glamour of the day.

The hallmark of a lively event is a capable compere. Funfair, comedy, good music and more were what fast-rising comedian, Samson D Great brought to the table when he anchored the reception which held still, at Mama’s house. He was not just an anchor, he also doubles as a singer and broadcaster with LTV in Alausa, Lagos.

YINKA FLAVOUR ON THE BANDSTAND

Call him jack of all music and master of all and you will not be wrong. However, he is best described as a fuji musician. Yinka Flavour thrilled his guests back to back on the stage. His band boys also added spark to his performance. Yinka Flavour who will turn 50 very soon described himself as a follower of KWAM 1 and Mayegun of Yorubaland, King Wasiu Ayinde Marshall.

All of Mama’s children were stunning at the event. One of them who stood out was Olayinka. She works with Total, a multinational oil and gas firm. Her outfits spoke volume. Her guests also stood by her. It was a different ball game entirely when she stormed the dancefloor with her friends.

Olabode is Mama’s only son. And as a common tradition in Yorubaland, he stood as the man of the house during his mother’s final burial. The talking point was when his guys fell in. trust boys, they can be the life of a party when they choose to. This time around, they did and it changed the narrative of the event. Storming the dancefloor, they came in the company of private security officials who safeguarded them all through the party.

LEPA SHANDY TAKES OVER THE STAGE

The report of this party will be considered incomplete if mention is not made of Oluwabukola, Mama’s last daughter who is popularly known as Lepa Shandy. Let’s quickly tell you that Bukky is such a great dancer who put up an exceptional performance at Mama’s burial ceremony. She made the band almost exhaust their energy on her alone. She went back and forth of the stage receiving some serious accolades and cash spray as she expressed herself through dancing. She also has a friend who bears Bukky too. The two Bukky’s had one thing in common, good dancing skills.

A good number of Lagos socialites fell in. On of them was the popular Eniba of Ketu. He is a Lagos big boy. He is very popular in the Ketu axis of Lagos, where he derived his nickname from. He also came in with his own entourage who added glamor to the party. Yinka Flavor, the bandleader sighted him from afar and sang his praises until he walked upstage to spray some cash. He didn’t end there, he also extended his cash spray to others around him.