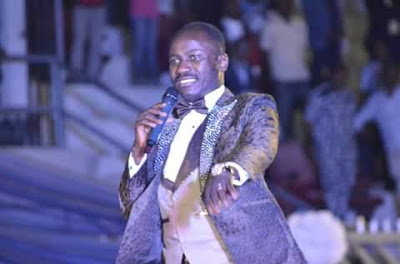 A video clip showing the sad moment a team of Zambian police and immigration officials teargassed and forced an Omega Fire Ministries pastor out of his home in Zambia alongside his pregnant wife has been revealed.
Pastor Augustine Oso Ebosele who leads the church in Zambia was accosted by immigration officials at his home where he locked himself from being deported.
Zambian government accused the pastor of overstaying in the country after the expiration of his four-year work permit in June. However, instead of renewing the permit, the Zambian immigration authorities gave the pastor four months extension to wind up his activities and leave for allegedly preaching against the President of the country.
According to the Zambian Observer, Obosele’s ‘quit notice’ comes on the heels of the Senior Pastor and General Overseer of Omega Fire Ministries International, Apostle Suleman, claim that Zambia is one of the nations in the world that deports Nigerians through ‘Zambianisation’ to take over their successful ‘massive’ investments.
He alleged that Nigerian churches that are growing including his own with branches in Chingola, Ndola and Livingstone are being targeted to remove pastors sent by him. The Minister of Information and Broadcasting Services who is also Chief government spokesperson, Kampamba Mulenga, described the allegations as baseless.
She said Zambia has not closed Omega Fire Ministries and is not against Nigerian Pastors, adding that Omega Fire Ministries Headquarters in Auchi, Nigeria is free to send a senior pastor to come and help reconcile the membership in Lusaka.
The cleric claimed he is being targeted by government officials for refusing to pay K30,000 bribe to facilitate his stay.
He said that he had presented tangible evidence of corruption to both the Ministry of Home Affairs, and the Ministry of Religious and National Guidance but that it was largely ignored.

Omega fire pastor teargased and bundled into a car like a criminal before being deported to Nigeria. pic.twitter.com/Rjhzqvp4w0

The cleric also alleged that some expelled members of his church had reported falsehoods about him to the ministry, which they investigated but did not find any fault.
“I got a call from one man from Religious Affairs. This man can call thirty times in one minute, I don’t know how much they gave him. I went to the office to see him at his office, there he accused me of a lot and lots of things.
“From there he told me that I needed to cooperate with him because my deportation order is already on his table. He said if I don’t cooperate he would have me deported and I should give him K30, 000, to which I questioned whether it was his ministry that deported people,” he told Lusaka Times.
Pastor Obosele said that when his documents were up for renewal, he submitted to the Immigration but that he had found it difficult as was promised to get his papers cleared.
Apostle Johnson Suleman in his reaction as warned the Zambian government that they are playing with fire as the government’s action is capable of incurring God’s wrath.
Watch full video below:
Omega Fire Pastor Teargassed and Bundled Into Car Like a Criminal Before Being Deported From Zambia (Video) was last modified: November 3rd, 2017 by Arinze Ago

MUGABE’S SPOKESPERSON SAYS THE PRESIDENT WOULD HAVE...