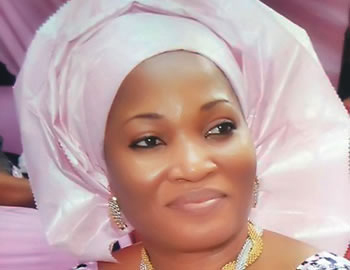 On Monday 30th July 2018 was indeed a happy day for the Ondo State Commissioner for Women affairs and the leading APC female House of reps aspirants, Princess Hon Omowunmi Olatunji as she gives marriage a second chance as she say “I do” to her UK based beau, Mr. Matthew Tive.

She was looking pretty in her long cream wedding dress while the groom wore blue suits. The first stage of the marriage which took place at festac town local government area of Lagos state was witness by few family members and friends in a simple but classic court marriage. While the second phase of the wedding, the traditional\engagement ceremony will take place in Akure, Ondo state capital on Saturday 11th August 2018 between the families of Pa Samuel Olatunji Eddo of Akure South local government area and families of Prince Daniel Ojite Ohwovorioleof Ugbeli South Local government area of Delta State.

The event will take at the Bride’s father compound at No 15, Oke Emesho Street, Akure, Ondo while the reception will take place at the OSDPC Multipurpose Event Centre, first gate Ijapo Estate, Akure Ondo State 4 days to her 45th birthday.The Sky and Royal blue party is said to be strictly by invitation and been contracted to top event vendors and it will attract celebrities across southwest, Nigeria to the sunshine state as they will be gathering to celebrate with this women of substances and a leading voice for women in politics.

Until Monday 30th July when the news of her re-marriage was broken on social media by her close associates like LyneOladapo, Oluwatoyin Adegbenro, Folashade Onifade, Funke Aruna among others. The question was who is the lucky man who took over the heart of this simple, down to earth but principle Ondo state women affairs commissioner, my choice as Princess Hon Omowunmi is fondly called by her political associate kept her relationship close to her heart and only confide in few friends who share her joy with. Much is not known about the groom but Citypeople gathered that the groom Mr. Matthew Tive hails from Delta state but he is based in UK before they cross each other’s path early this year and one thing led to the other and the rest is history.

This elegant and stylish female politician took the decision to remarry after 9 years of separating with her former husband and father of her three children, Pastor Edet but hardly will you know she is a divorce because she still maintains her former husband’s name until recently when she reverse to her father’s name Olatunji. According to her when she broke up in 2009, she said she was notgoing to re-marry and it will be known to the whole world. While she hold on to the name was because of the children. Her first marriage was in 1993 when she was 20 years of age and 16 years after she quit the marriage. Aside from been a politicians she is an ordain pastor since 1995.

Though 2016 when she joined Ondo state politics, much was not known political about this femaleformer Lagos state lawmaker in Ondo State politics rather she is well known among Lagospoliticians because she was a two-term member of Lagos House of Assembly, having contested and won twice the Oshodi/Isolo Constituency II seat since 2007. She makes a huge statement with her women empowerment project which cut across the 3 senatorial district with over 1500 women in attendants as at 2016 and since then she has take over the political circle in the sunshine state of Ondo State.

This two-term lawmaker was the former Chairman, House Committee on Establishment, Training, Pension and Public Service in the Lagos State House of Assembly, LSHA. She holds a first degree in English Language from the Lagos State University, LASU, as well as a diploma both in Theology and Computer Science. This elegant and stylish female politician is a native of Akure South local government area and she run an interior outfit in the sunshine city of Ondo State. Her decision to return home and join the APC was a welcome development that gave women insight on their impact in making life better.

She is President of National Council of women societies (NCWS), Ondo State chapter and commissioner for women and social development in Ondo State. She was born on August 15, 1973, in Lagos Island, to the family of Pa Eddo Samuel Olatunji.She had her primary education at St. Matthew’s Primary School, Akure and her secondary education at St. Louis Girls Grammar School, Akure. Her tertiary education started at National Teachers Institute, Kaduna, where she trained to be a teacher.

She was also at Lagos State University, Ojo, for her first degree in English Language.

In the course of her foray into partisan politics, she did a certificate course in Government and Politics at Harvard Kennedy School, USA and London Valley University, Slough, United Kingdom. She is also a pastor. She has a diploma in Religious Studies from Bible Faith Training Centre, Lagos. She has been a Pastor for many years now and she runs an NGO with headquarter in Ghana.