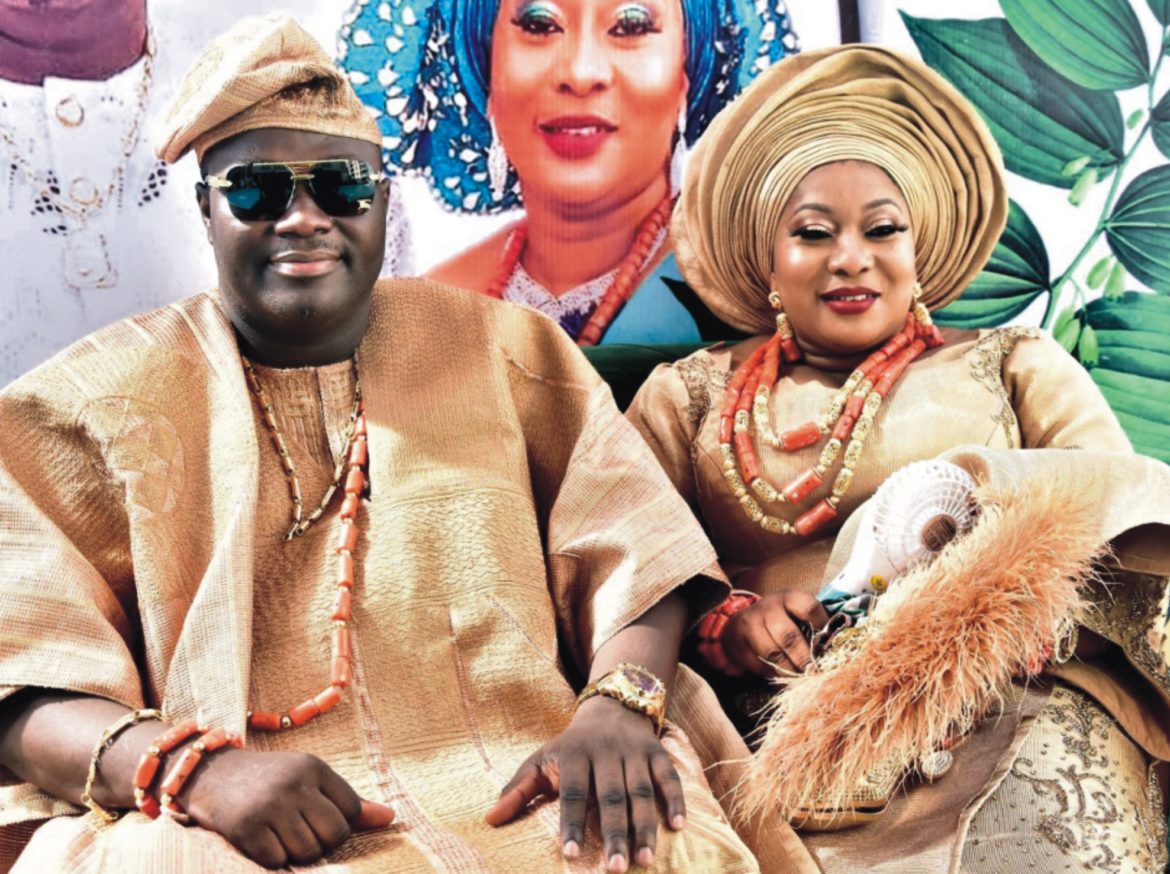 Sunday, March 8, 2020, will forever remain a memorable day for the Royal family of Ogunwusi Ojaja II of Ile-Ife, a unit of the giant ruling Royal Family, Agbedegbede, the root of the present Ooni of Ife, His Imperial Majesty, Oba Adeyeye Enitan Ogunwusi, as one of the Princesses of the family,  Adesola Oluwatoyin Mojisola Ogunwusi, the elder sister of the incumbent Ooni got married to the love of her life, Prince Ayoola, from Late Pa. E.A Shoremekun’s family in  Oke-Ona, Abeokuta.

The event which took place at Prime Water View Garden, 2 Estate Gardens Road, off Freedom way 3rd Roundabout, Ikate Lekki Lagos, was obviously planned to be a low-key event, but eventually turned out to be one of the most talked-about traditional weddings, as it was well attended by top celebrities, high net-worth businessmen, first-class monarchs as well as government officials and politicians. Every road that led to the beautiful Estate in Ikate experienced traffic bottlenecks on the day.

This traditional wedding that was tagged: ‘Royal Wedding’ was, indeed, a Royal Wedding. A jaw-dropping and colourful event that literally shook the entire Ikate community and its environ. The bride’s family dazzled in yellow expensive fabrics Aso Ebi while the grooms family dazzled in Peach colour Aso Ebi. The combination of the 2 colours made every guest stand out in their individual outfits.

City People’s  SUNDAY ADIGUN and FEMI ADELEKE were at the grand event to serve you gist on how it unfolded.

The pretty Princess  Adesola Oluwatoyin Mojisola Ogunwusi is one of the three beautiful sisters of the Ooni of Ife, His Imperial Majesty, Oba Adeyeye Enitan Ogunwusi. Aside that she’s from a royal family, she is one of the top society ladies in Lagos. She’s very warm, adorable and stylish. She was the cynosure of all eyes on her day, as she dazzled in her 2 outfits for the wedding. The Joy that she exuded showed that she was the happiest woman on earth.

The groom, Prince Ayoola Owolabi Enitan, is also from a royal family in Abeokuta in Ogun State. He’s a Nigerian businessman based in Italy.  He is handsome, black and very stylish and he usually dresses to the nines. When you see him, he always spots designer-wears.  His accessories are customised. There is no iota of doubt that he’s indeed, the man for such a beautiful Princess.

As usual, in accordance with the Yoruba tradition, the professional Alaga Iduro and Ijoko for the day displayed their professionalism at the event and made it worthwhile for all guests. The bride and the groom were summoned to perform the necessary rites which were coordinated by the Alaga Ijoko and Alaga Iduro.

The beautiful wife of His Imperial Majesty, Oba Adeyeye Enitan Ogunwusi, Olori Prophetess Silekunola Ogunwusi, came in majestically with her entourage at the beginning of the event. She was also a cynosure of all eyes, right from when she stepped down from her car. She was at the event until the very end of the ceremony.

IYALAJE OF THE SOURCE DAZZLES

Another close associate of the Ogunwusi family who was very visible is the Iyalaje of the source, Princess Toyin Kolade. She was busy while the party lasted, attending to guests one after the other, especially the kings who were present.

The 2 Ooni’s senior brothers played hosts at the Royal Wedding of their beloved younger sister, Princess Adesola. They were sighted attending to needs of guests.

And the 2 other princesses too, were in their glamorous outfits when the bride was invited to the podium by Alaga Ijoko. They led the bride and her friends inside the hall. They also played a great host to all guests. Like we all know,  the princesses are three and they are close. They love one another wholeheartedly.

After Traditional Engagement, it was time for the merriment. The reception hall of the wedding was opposite the site of the engagement, inside the same Estate. It was beautifully decorated. A professional live band thrilled guests with his wonderful performance. There were lots to eat and drink. Undoubtedly, everybody had a nice time and enjoyed the Royal wedding.

OVER 100 CELEBRITIES DAZZLE  IN THE 2 ASO-EBI

The party attendees were 80 per cent women. Why?  the bride, Princess Adesola is also a society lady. She has many friends across ethnic and religious divides in the country.

Almost all the women wore Aso-Ebi because the party was more or less a show of class. The celebrity women are the life and soul of any party because with women, you can be sure of having unlimited fun. These sets of women are pretty big on their own.

They cherish looking good and that was what happened at the party. Most of them stepped out in their best attires. One significant thing about all of them, besides wearing a uniform, was that their necks did all the talking with expensive jewellery, which was either diamond or gold.

Most of them looked beautiful in the uniquely yellow and peach fabrics Aso-Ebi.

READ ALSO: HOW TINUBU PLANS TO BECOME PRESIDENT IN 2023 – HIS STRATEGIES & HIS TACTICS REVEALED